Violet Blue January 12, 2016 0 pieces of BRILLIANCE put forth by a DARING and DELIGHTFUL reader

In this great post at Kotaku we get a terrific, body-positive, sex-positive and nonjudgmental tour of the most popular tool for Fallout 4 Skyrim and PC gamers to re-style their characters to include nudity. The video explains ‘Caliente’s Beautiful Bodies Edition,’ a Skyrim mod “that gives players more control over the customization of female characters” which has been expanded to Fallout. Kotaku asks Caliente why it’s just for female bodies (others started doing male bodies first, and did them well), and also includes a tidbit about the fact that Fallout focused its body rendering on the male characters, and the the female rendering isn’t as well done, suggesting that Bethesda treated the female bodies as a sort of afterthought. Also — pun intended — dicks are hard (to mod). 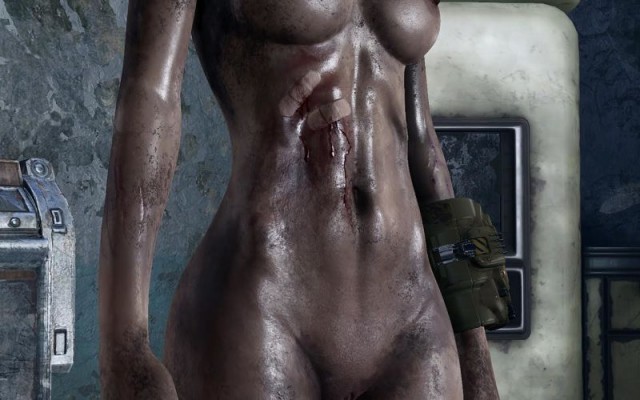 The accompanying article Inside The NSFW World of Fallout and Skyrim Nudity Mods is fantastic, and has lots more info. I especially appreciated learning this:

(…) Some promise “lore-friendly” titillation, so they’ll provide, ultra-sexy characters caked in dust, grime, and displaying visible injuries. Hey, just because you’re an ultimate fantasy bombshell doesn’t mean you’re impervious to the hazards of the wasteland. Or something like that.

Several modders I spoke to cited the importance of alterations that don’t take the player out of the moment. Ubercharge, the creator of the body mod in the picture above, put it to me this way: “If you look how dirty/dusty/rough [the] environment of Fallout 4 [is], suddenly [CBBE bodies look out of place]. Perfect bodies will break you out of the immersion. There is no use for nice bodies if your brain doesn’t believe it’s real.” …

All I have to say is…. GIMME MODS NOW. I wish this wasn’t just for PC. I play Fallout 4 on PS4, and I’d have so much fun with this mod. I’d make Outpost Zimonja a nudist camp. I’d make Abernathy Farm a porn studio (a really boring one where no one has sex). And yes, I’d occasionally have my character out on missions sekritly naked in her Power Armor, in addition to wearing nothing but my daily-wear armor and a trilby hat for when I need to become Lady Justice with a shotgun and rain holy tit-punching hell on a bunch of Raiders who think it’s funny to keep calling me “that little bitch.” Also, a couture mod would be nice. And a mod to make my wonderful dog (Dogmeat) into a leopard or tiger (Catmeat). OR A PONY GODDAMN IT.

Though, I have discovered I can upskirt myself pretty well in the Grognak costume, so I guess I’ve got that going for me.

Anyway, this is a great video for its information, insight, maturity about nudity, art and self-expression. And because it doesn’t pretend to give you a post about nudity and then not show you what they’re actually talking about. Thank you, Kotaku — bravo for treating us all like adults.