Violet Blue June 6, 2011 2 pieces of BRILLIANCE put forth by a DARING and DELIGHTFUL reader

Kung-Fu Cooking Girls is made of delicious win. In one of the most entertaining animated short films I’ve seen in years, two fierce and sexy Chinese cooks have a DimSum battle reminiscent of every favorite Aeon Flux battle scene I cherish (Aeon the animated series, not the abysmal movie). No subtitles, but no matter – kick-ass female fighters, bouncing boobies, nip slips, ingenious food-weapons, gratuitous upskirts and much more… including a tender surprise ending.

Wolf Smoke, a China-based animation studio with only a small team of animators explains,

“We did key frames on paper first then used vector software to do the between frames and color painting. This is the first time that we use this way to do stuff. Over 4000 key frames hand drawing and over 10,000 inbetweens in this movie.” (via Twitch, see also Wolf Somke on YouTube and a few film posters here) 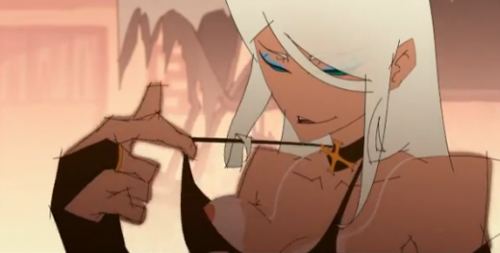