What happened with Amazon, and decoding “tasteful”

Violet Blue April 7, 2019 0 pieces of BRILLIANCE put forth by a DARING and DELIGHTFUL reader

Just so there’s a public record of my recent experience with Amazon Associates, I’m putting it all on one place below. The short version: Amazon terminated my Associates account with vague language about unsuitable content on one of my websites (this one). After reaching out to tell me it was a mistake, but asking me to change a few images, and then going unresponsive, Amazon eventually reinstated my account just over a week later. I discovered that Amazon is doing random, somewhat automated reviews on Associates accounts, but they are fine with nudity on partner website — as long as it is “tasteful.”

On Tuesday, March 26th, I got an email from Amazon saying my Associates account was terminated “because the content [on this website, tinynibbles.com] promotes unsuitable activity.” The email also said the company would not pay the outstanding fees owed to me. My account was reinstated eight days later on Wednesday, April 3rd. What happened in the middle of that, in today’s environment of unprecedented sex-negativity by internet companies, is worth an examination. Especially because Amazon was mature, accountable, and sex-positive about the situation.

I’ve been an Associate since 2003, linking from many websites, and have a lot of author-related business with the company in general. My first feelings were confusion (what changed?), panic (this is writer income), and hopelessness (we’re in a dark time for sexual freedom and expression). Amazon Associates is a huge part of my author income; it makes the time and effort put into my book review posts worth it. Associates is also how I make up for the many titles I got swindled out of royalty income for when a major erotic publisher sold its catalog of books without telling any of us authors. Plus, after 17 years my Associates links are everywhere, like other sites I run such as Digita Publications.

I tweeted about the account termination and seizure of my funds. I listed a number of very common, very necessary online business tools that everyone takes for granted, and noted that I was not allowed to use them because of their regressive, discriminatory sex rules (some new under FOSTA, some not).

On Twitter I found lots of sympathy and support; I also got attacked by right-wingers who thought I deserved it for articles I’ve written saying that Facebook should stop defending and disseminating the provably dangerous speech of neo-fascist conservatives. I’m well aware that the war on sex is nothing more than malfeasant security theater, and refuse to be silent about it. The right-wingers’ assumptions that this might be my first experience with sex censorship proved to me just how ‘amateur hour’ the whole conservative-censorship charade really is.

<le sigh> Totally with Violet on this. Been 'adding exposure' to this for years, to no effect: https://t.co/yxdTbP9edZ At @makelovenotporn we're in the same boat. Trying to socialize sex to make it better for all of us, being shut down by the business/finance world at every turn

My tweet (and thread) was widely-shared. On April 1st I was surprised by an email and phone message from Amazon Executive Customer Relations. I initially suspected that I was going to get what I call “a PR massage” — when tech companies dislike factual but negative coverage in reporting, they often try to talk journalists like me into changing words in an article to be more favorable to the company (or the company’s lawyers). I’ve had a number of company reps try this over the years. Facebook is the worst; in my experience they’ve tried to get me to change my reporting to something less problematic for them, but also less true. It never works (on me, anyway). I just figured Amazon wanted to tell me bad news in a different way and I anticipated a waste of everyone’s time. Still, I wanted to try and get some answers about their sex content policy.

The rep called me again. She chatted me up for a few buttery minutes then said that Amazon has millions of Associates accounts, which get randomly flagged for review. In this instance, their review system had failed, and they were sorry. They also said they wanted to acknowledge that Amazon does sell “sexual wellness products and smut,” and were fine with nudity, like what was on my website.

I wasn’t expecting to hear that. But then the rep told me that there were a few specific images that had caused their review team to mark my account as violating the operating agreement. Images that were what the team thought were over the edge, not as “tasteful” as everything else, which they said was not a problem. The rep said that before the call, she had tried to find a technical solution — she didn’t know how to code, she said, but had tried to find a way I could just blur a few of the images. I said this was very thoughtful, but that hey, this is an easy fix. I speak code. “If you’re comfortable with looking at my site,” I said, “if it’s within your comfort zone, can you tell me which images to change?” I said I could do it in the next twenty minutes. She said that was great; after the call she’d send me a wrap-up email, and I could respond when the changes were made, and my account could be reinstated that evening.

(I told her I was writing down what she was saying on the call. She told me the call was being recorded. I said, “Oh in that case, please tell Amazon I said thank you for saving The Expanse.”)

As you might expect, I’ve been through situations like this before. It has unfortunately been my experience that what is “tasteful” with one team is not “tasteful” with another company’s team a year later. After Flickr sold to Yahoo, my account got hit in 2007 with the banhammer for having nudes in it; when I got public support, the Flickr’s founder Stewart Butterfield contacted me and I was reinstated with his okay on tasteful nudes. A year later I was banned again by a different team, and was lucky I had the founder’s emails to prove that I wasn’t afoul of the rules. It happened *a third time* in 2013, and again I referenced Stewart’s email to get out of user jail. 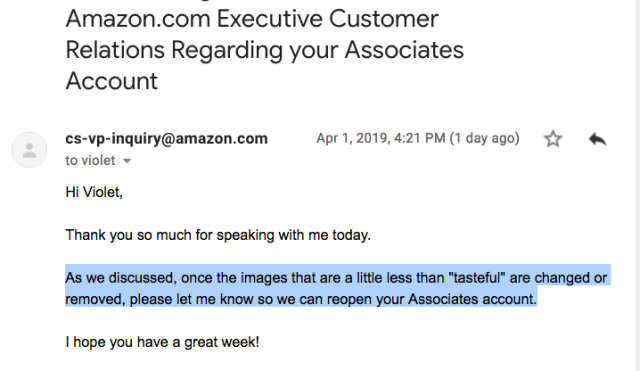 I got Amazon’s as-promised email confirming our conversation (screencap above). I emailed back within the hour saying changes were made, then … nothing. I emailed again that night to check in, and got an “out of office” response from a different rep. In the morning I emailed again — only to get another ‘she’s not in the office and I can’t help you’ response from yet a different rep. It appeared I was either being flaked on, or lied to.

I was despondent and didn’t know what to do. Imagine being an author, and Amazon doesn’t like you, won’t do business with you, or has put a mark on your record somewhere.

You can’t imagine it because it’s not really possible if you want to survive as an author, let alone be successful.

That same morning I was simultaneously sent a link to Techdirt’s superlative writeup on the whole mess. I was glad I waited to say anything publicly about Amazon telling me it would get fixed; maybe I did get that PR massage after all. I wrote a twitter update, at a total loss as to what I was going to do about anything.

The next day, Amazon Executive Customer Relations appeared in my inbox (and voicemail) again — a new representative. They reinstated my account — and apologized for the delay, and thanked me for “escalating the situation.” I was genuinely surprised, and … happy? Yes, happy. To get my account back, but also to know that Amazon isn’t following companies like Facebook, YouTube, or Apple in goose-stepping off the cliff of humanity, diversity, and sex-positivity by demonizing human sexual expression. Amazon wasn’t being added to the list of major service providers and business channels that are discriminating sexuality writers, artists, workers, and business people into a terrifying oblivion. 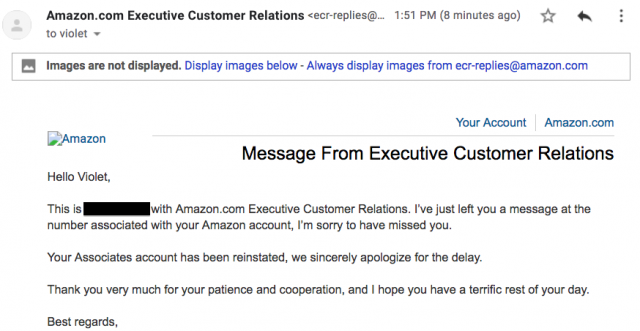