Violet Blue November 24, 2012 1 piece of BRILLIANCE put forth by a DARING and DELIGHTFUL reader 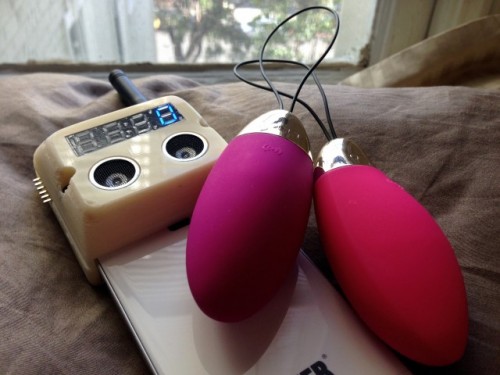 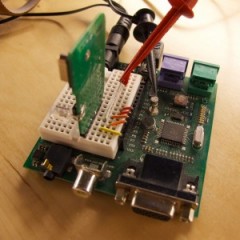 Beth wanted to improve the vibe’s input and hacked the Lyla’s remote. And hack the remote she did, reprogramming it with off-the-shelf Arduino, incorporating a sonar sensor and LED display. Beth also made her own plastic parts for the remote casing with a 3D printer and modeled her designs with Blender, resulting in an entirely open source project (her Arduino sketch is in the project’s GitHub repository). YAY! She writes,

My early prototype used a simple knob attached to a variable resistor, and that already seemed like a big improvement over the original LELO remote. I wanted to build a simple proof-of-concept remote that would just demonstrate the improved radio range and responsiveness, without doing anything particularly fancy. After that, I planned to dabble in more esoteric input devices. Audio spectra, conductive fabric, capacitive sensors embedded in lingerie, and so on. The Arduino library I ended up writing for this project offers some great opportunities for further tinkering.

Here’s a video of the resulting prototype:

For different kinds of play, it may make sense to have different scaling algorithms for converting distance to intensity. I’m interested in making the firmware more versatile, but not at the expense of reducing its intuitive quality. The “Lock” mode is already way too unintuitive for my tastes. Perhaps an additional flavor of user interface, via an accelerometer or SoftPot would help.

But honestly, the thing I’m most excited about improving isn’t even technical. In some ways, this kind of toy feels like a musical instrument. It is a simple machine with very few inputs, but it interacts with your body in such a way that it opens up a broad array of techniques that can each be mastered. I’m looking forward to spending more time with it and learning how to play.