Thomas Roche August 21, 2012 6 pieces of BRILLIANCE put forth by a DARING and DELIGHTFUL reader 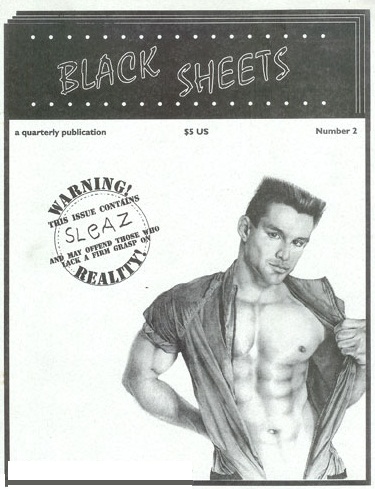 Bill Brent was the editor and publisher of the influential 1990s sex zine Black Sheets, as well as a literary event and sex party organizer, book publisher, punk rock fan, and more. He killed himself this past weekend by jumping off the Golden Gate Bridge.

In addition to publishing Black Sheets, Bill was responsible for The Black Book, a book-length sexual resource guide in the days long before the web made such things interactive. He founded Perverts Put Out, an alt-sex literary performance series that continues to this day under the care of Simon Sheppard, Carol Queen and Lori Selke. Under the Black Books imprint, he published numerous books, including Best Bisexual Erotica (which he co-published with Circlet Press) and my own Noirotica 3. He also co-founded and co-ran the Black Sheets pansexual play parties, which were a hugely influential venue.

There’s no easy way to describe the place that Bill Brent has in American History — and no, I’m not overstating it. The tragic truth is that people like Bill too often are forgotten. Even radical queer histories tend to eat their own. But Bill was a giant of the San Francisco sex underground. Oozing (some would say “spurting”) Bill’s natural charm and perverse humor, Black Sheets came along at a time when the sexual landscape of San Francisco was being completely redefined. Bill had been an old school SF punk in the eighties, and brought a mosh pit sensibility and DIY aesthetic to the radical queer expression that was just getting started in the early nineties.

With Black Sheets Bill actively sought out and encouraged original voices; Black Sheets was one of the first zines to publish my writing, and it published it because Bill tracked me down after a reading. He believed you learned about literature the same way you learned about sex — by getting your hands dirty. He got his hands, and the rest of him, as dirty as he needed to to follow his bliss and stick it to The Man.

Bill Brent — author, publisher and thrower of literary events and sex parties — has taken his own life. He was important. Up there with Geoff Mains and John Preston.

He was the crown prince of the San Francisco sex nerds. The world he envisioned was so totally different than the one we live in. For artists, writers and dreamers, that disparity can be shattering. Let us all continue to write and perform and gather together. The alternative sucks.

Kirk is not exaggerating. Bill’s may not be a name you recognize, but the world would not be the same without him.

Bill himself said something beautiful in his page at Author’s Den:

Each of us wants to hear someone shouting back as we scream into the abyss.
–Profound Bill

In classic Bill Brent style, he followed that up with the observation:

So here’s some candy, in honor of Bill — over on Thomasroche.com, I’ve posted his punk rock sex-noir story “I Want Candy,” Episode 1 of his Dick Death series. It appeared in the first volume of my anthology series Noirotica in March, 1996.