Thomas Roche March 17, 2012 0 pieces of BRILLIANCE put forth by a DARING and DELIGHTFUL reader 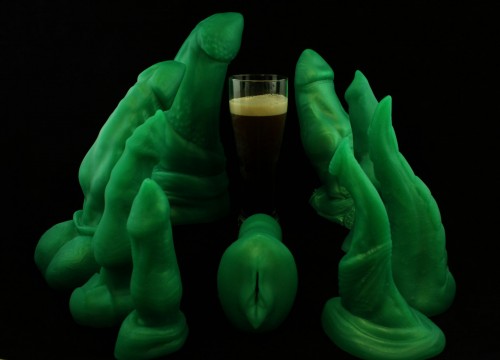 If I told you “bod ollphéist” means “monster cock” in Irish Gaelic, would I be whispering sweet nothings or just showing off my Google Translate mojo? The two are often one and the same for me, but the staff of Bad Dragon Toys speaks a universal language.

For St. Patrick’s Day, until midnight tonight Bad Dragon is offering a special batch of toys in clover green — that lovely shade long associated with my (currently rolling-over) ancestors’ homeland.

And don’t it give “The Wearin’ O’ the Green” a whole new connotation?

Most of the toys have truly illuminating backstories that hint at wildly active imaginations on the part of Bad Dragon’s assuredly Hagrid-esque zookeepers. Something called “The Xenogon,” for instance, has more than just “normal” monster-cock appetites:

A cross between an alien and a dragon, the Xenogon has all the desires and needs of both parents. Here at Bad Dragon, we know that dragons are nigh-insatiable, but aliens are a whole new breed of desire, and this Xeno takes after his alien father! Be a test subject and submit yourself to his dominant nature, we’re sure he could think of over a dozen experiments to do on you…

The Xenogon is known for his dominance; after all, they are incredibly feral creatures! That’s why his cock is covered in all sorts of ridges, bumps, and pretty much every sort of texture you can imagine.

Cross-breeding dragons and aliens? Why didn’t I think of that?

For those of you more partial to xenosexual partners of the feminine variety, there’s Janine the Dragon — but, hey, safety first. I hear Janine is a bit of a squirter, so lay down some asbestos chuck pads first.

In fact, if you plan to pleasure your new pet of any monster-gender, expect things to get messy. The disappearance of certain Bad Dragon customers into Pleasure Vortices in the Astral Matrix cannot be confirmed or denied, and the manufacturer assures us via magic scroll that Bad Dragon’s fantasy-enhancing “cumtube” technology has not once been known to result in hysterical pregnancies and little fire-breathing bundles of hybrid joy — so far. Nor, reportedly, has any monster’s lucky St. Patrick’s Day date succumbed to the reported spectral energy known, on certain liquor-fueled holidays, to bend the shimmering boundary between fantasy and reality enough to result in anatomically accurate ejaculations — which, with certain species of dragon, could result in a minor char-broiling about half an hour after last call. Be warned! You might wanna pick up some asbestos chuck pads just to be safe — when these lovers get hot and bothered, we mean hot.

If this all seems forty flavors of stark raving batshit to you, then you might not be Bad Dragon’s target demographic. You know who you are.

If, however, this Bad Dragon dirty talk has got you squirming in your fursuit and/or purring seductively, then maybe you should make with the clicks and meet your new best friend before the Alpha Centauran Mind Control Nanos make you break out your AmEx and order some dragon dick in bulk for all your neighbors, friends, and horrified coworkers.

But weren’t we talking about St. Patrick’s Day? Ah, yes, the green landscape of the Emerald Isle have long attracted very randy dragons. That’s probably because our pasty-pale skin makes us relatively easy to spot from 13,000 feet. At even greater risk of abduction by dragons are Irish redheads, who are advised, when seized, to just lie back and think of Finn McCool. Dragon abduction, incidentally, is made less traumatic by staying highly lubricated at all times.

How do I know? Well, let’s just say I didn’t play Dungeons & Dragons all those years and not learn a little something about courage.

Anyway, Bad Dragon Toys is having a St. Patrick’s Day sale. You might consider that politically odd, considering that St. Patrick himself reputedly chased all the snakes out of Ireland (a coded cultural message, incidentally, about obliterating the isle’s Celtic religion). And also, in Ireland green has a clear politico-religious connotation. So…just in case buying monster cock on the internet isn’t fucking pervy enough for you, now, no shit, you’re buying Catholic monster cock. Let’s see what kind of Google traffic that phrase gets us, shall we?

And yes, that is an anthropomorphic Irish Wolfhound on Bad Dragon’s St. Patrick’s Day landing page, complete with suspenders and an emerald green bow tie — though he appears to have lost his top hat. What’s more, he appears to be acquainting himself rather intimately with an undisclosed “member” of Bad Dragon’s menagerie.

I don’t even wanna think about what kind of offspring those two are gonna have.