The Russian Sex Wars: “Let’s Do It Together.”

In the above ad, which was aired on Russian TV in support of Prime Minister Vladimir Putin and President Dmitry Medvedev’s United Russia Party, sports the slogan “Давай сделаем это вместе,” or “Davaite sdelaem eto vmeste,” which translates as “Let’s do it together.”

Are those older Russians thinking, “Ah, the recklessness of youth is on full display in Mr. Putin’s New Russia?”

Or are they thinking “For this, my father ate rat meat during the battle of Stalingrad?”

The point is to remind Russians to vote in their December 4 election, in which the United Russia Party is expected to face no real opposition. In the ad, as Politico puts it, “the weirdness of [Russia’s] fake democracy is on full display…The ad conflates voting and sex in a way that makes no sense but has great production values and a compelling beat.”

There is a compelling beat — I’ll give ’em that! But as resurgent Russia has gained traction in the world economic community, Russian sex has gotten…interesting. For one thing, in Russia, the blow-up dolls ride you. Back when Moscow was choked by the smoke from wildfires, a Russian photographer released amazingly sexy and weird smog-fetish photos…which, sadly, have since been taken down.

But equally weird is the Western response to Russia’s sex life. The strangest example is the Daily Mail’s legendary 2007 article about the Breed-for-Mother-Russia-style bareback-sexfest supposedly occurring at the youth camp run by right-wing pro-Putin, pro-Kremlin youth group Nashi, or “Ours,” which the Daily Mail claimed was making Russian girls shed their Western underwear and proudly follow wholesome Russian males into breeding pens to further the continuance of the race. Other sources like Radio Free Europe and Time have a far less “stimulating,” but no less disturbing, account of Nashi’s youth-activist goals and methods.

Still, sometimes it seems like Putin’s Russia is devolving into, as Gavin Laessig put it, “an episode of ‘Entourage’ that has nuclear capabilities.”

As Laessig points out, The Medvedev Girls are another weird data point: “presidential cheerleaders.” No, really:

The president of Russia has his own cheerleaders. Not politically or metaphorically…literally attractive young women in tight tops and short skirts. These are the Medvedev Girls, an online activist organization who really love Russian President Dmitry Medvedev.

If it wasn’t for this Reuters picture of Medvedev in front of them, I’d think the whole Medvedev Girls thing was a hoax: 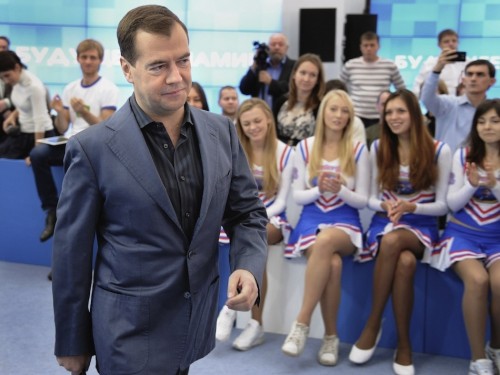 But, nope, there he is, contemplating world domination immediately following his imminent winning touchdown in the Big Game.

And, yes, that’s smilin’ Dmitry himself, right there on the uniforms: 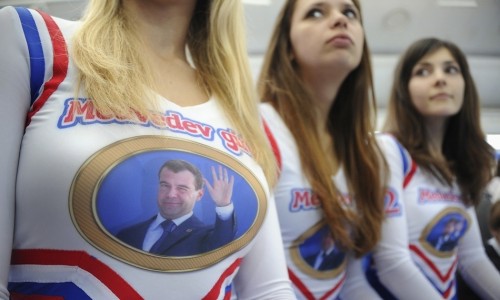 Personally, I think Medvedev looks like he’s trying to grope that boob from the inside, or maybe escape from some Robo-Cheerleader’s chest cavity. I don’t know about you, but I will not sleep well tonight.

Of course, modern Russian opposition forces also have one hell of a spunky sense of humor sometimes. Let’s talk for a moment about Russia’s radical arts group Voina, which got a grant from the Russian government. That was, in fact after they painted an enormous penis (horizontally) on a drawbridge opposite the St. Petersburg offices of the Federal Security Service or FSB (the successor to the KGB). Once hoisted to the vertical, it provided a dramatic vertical statement in support of the rising Russian arts-boner and a dysphemistic middle-finger to FSB authoritarianism:

Voina also flipped police cars over as an “arts project,” resulting in some of its members being incarcerated.

And, no, Russia is not Ukraine…but do I really need an excuse to remind you about Femen, the Ukranian women’s protest group? They don’t identify as Feminist; they’re anti-porn and anti-sex-work, despite parading around topless with their rampant Ukranian hotness on display. But Femen’s apparent contradictions just helps reaffirms to me the absolute mindfuck-to-Westerners provided by the attitude toward sex in the former Soviet states. I’m convinced that a healthy dose of this comes from the rampant exploitation and corruption that took over those states when the Soviet Union fell, which gave sex work and porn a completely different context than it could ever have in the West.

But then, in much the same way that the United States and its allies seem to have been wholly unprepared for the arrival of Russia on the world economic stage, it seems like we’re equally unprepared on a cultural level. Femen being banned from Facebook is just one example of the many ways in which the West’s media infrastructure is failing to serve the pro-democracy citizens of the resurgent states of Eastern Europe.

But then again, at least Russia’s ruling party’s polling-place sex videos have a stirring techno beat. And isn’t that what really matters?

UPDATE: As Dia Lacina points out in the comments, however freshly oversexed Russian democracy may seem from certain angles, it’s also an astonishingly homophobic nation. Nikolai Aleeksev’s November 26 Guardian article on St. Petersburg’s anti-gay bill — which passed easily this month — is disturbing as hell. Aleeksev aptly calls the law “medieval barbarity.” The wretched law takes as is inspiration a similar law passed in 2006 in the Russian city of Ryazan. And the Moscow mayor has equated homosexuality with Satanism.