Erica Jong in the NYT: Blame the Internet!

Thomas Roche July 10, 2011 4 pieces of BRILLIANCE put forth by a DARING and DELIGHTFUL reader 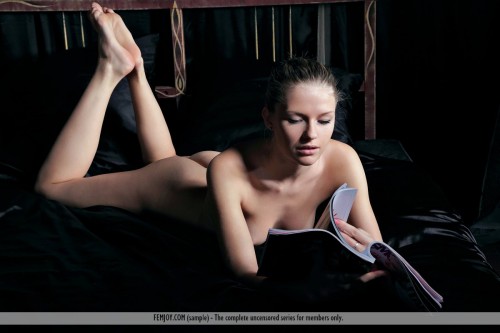 I’m willing to cut Erica Jong, author of the landmark feminist classic Fear of Flying, lots of slack — after all, she invented the zipless fuck. She’s an O.G. of women’s sexual liberation, and in many ways a personal hero of mine. But that only gets you so far, in my book. I can’t even begin to count the number of wrong-headed assumptions, prejudices, and long-jump conclusions she makes in her essay “Is Sex Passé?”, which appears in today’s New York Times. In attempting to codify a perceived distaste for sex among women in the younger generation (which she does not define), she relies on one example — her own anthology:

People always ask me what happened to sex since “Fear of Flying.” While editing an anthology of women’s sexual writing called “Sugar in My Bowl” last year, I was fascinated to see, among younger women, a nostalgia for ’50s-era attitudes toward sexuality. The older writers in my anthology are raunchier than the younger writers. The younger writers are obsessed with motherhood and monogamy.

It makes sense. Daughters always want to be different from their mothers. If their mothers discovered free sex, then they want to rediscover monogamy. My daughter, Molly Jong-Fast, who is in her mid-30s, wrote an essay called “They Had Sex So I Didn’t Have To.” Her friend Julie Klam wrote “Let’s Not Talk About Sex.” The novelist Elisa Albert said: “Sex is overexposed. It needs to take a vacation, turn off its phone, get off the grid.” Meg Wolitzer, author of “The Uncoupling,” a fictional retelling of “Lysistrata,” described “a kind of background chatter about women losing interest in sex.” Min Jin Lee, a contributor to the anthology, suggested that “for cosmopolitan singles, sex with intimacy appears to be neither the norm nor the objective.”

Generalizing about cultural trends is tricky, but everywhere there are signs that sex has lost its frisson of freedom. Is sex less piquant when it is not forbidden? Sex itself may not be dead, but it seems sexual passion is on life support.

The heterosexual privilege shown in the article is, quite frankly, terrifying. But where she really runs off the rails is when she blames the internet:

The Internet obliges by offering simulated sex without intimacy, without identity and without fear of infection. Risky behavior can be devoid of risk — unless of course you use your real name and are an elected official.

Not only did we fail to corrupt our daughters, but we gave them a sterile way to have sex, electronically. Clearly the lure of Internet sex is the lack of involvement. We want to keep the chaos of sex trapped in a device we think we can control.

I’m curious as to just how much internet sex Jong has had that she feels empowered to tell me what the lure of it is, “clearly.” If I, as a man, tried to tell her what it’s like to fuck as a woman, I doubt she’d be pleased. If Internet sex had only one “lure,” it wouldn’t be as popular as it was. And if the lure of Internet sex was the lack of involvement, then why is one of the most common ways people experience sexuality on the internet online dating? Or does she think that’s just, like, a different thing?

I don’t have the foggiest if she’s talking about online dating or not, because “Internet sex” is something Jong doesn’t bother to define. Does she mean chat room sex? Trading emails? Trading pics? Cruising chat rooms for in-person hookups? Webcams? Voice chat? Internet porn? Stories? Sexting? Sexting, but only if it’s on VOIP, because otherwise it’s “cell phone sex,” which is different? Or does Jong not know, and “Internet sex” is just a vague category into which she’s put all her ill-defined distaste for male sexuality, which always seems to run the fuck when it comes to sexual interactions on the internet — especially for women who don’t understand it?

Because it sure sounds to me like Jong is making a generalization about the internet based on something that most women don’t do — certainly not with any great frequency. When people in mainstream media sources talk “Internet sex,” I often think they’re imagining some weird chat room where people get whatever they want…where a mashup of gay bathhouse sex and 1995-era AOL chatrooms and Craigslist all collide in tech-hater’s hindbrains. Don’t they get that this is a series of technologies that are used in extraordinarily different ways to do very different things for different people — some of which may completely screw people up occasionally, but none of which actually change human nature?

By the way, you know what does change human nature? The passage of time — the shift of generations. Each generation gets to reinvent itself, but of course it doesn’t change completely. If there’s one thing I’m confident no aspect of “Internet sex” can be blamed for, it’s women in Jong’s social circle becoming, at a certain age, obsessed with having babies, while Jong has (presumably) entered into her post-my enopausal horny time and thinks it’s weird how baby-obsessed the next generation is. That, I’m afraid, is not the internet’s fault. How many generations need to do the same thing at a certain age and be shocked by it (“Gee, I never thought I’d want to have kids, but…”) before we realize that it doesn’t need to be pathologized or lauded?

What Jong’s doing, from a social sciences perspective, is making claims from a single data set she came up with. But like writers on sex for most mainstream sources, Jong expects to get a pass because what she’s writing about does not need the burden of support; she’s just riffing on “what she sees.”

But “what she sees” is clearly filtered through her own experiences to far too great an extent. Jong shouldn’t be telling me what my generation is doing unless she’s going to cite what my generation really has to say — over and above what she chose to include in her book. All I need are three examples, three real examples — that Jong didn’t publish — before I’m willing to entertain her claims of a cultural trend. Otherwise, I’d be at the mercy of anyone willing to treat sexuality as a jumbled-up batch of assumptions, presumptions, and prejudices. Then I’d cheer for the prejudices I already agree with. Sound familiar?

If, as Jong says, “generalizing about cultural trends is tricky,” then why is one empowered to do it so blithely? Why does one bookmark “sex” — not “female sexuality,” even, but “sex” — with two works, published thirty-eight years apart, by the same author? However many examples she want to cherry-pick from her own book — which came out a month ago, incidentally, and thus is still in its promotional cycle — the fact remains that Jong edited it. If she wants to make assertions about a whole generation of women, she’ll have to do better than that.

Look, I’ve edited anthologies — lots of them. I’ve sold my work to many hundreds more. I know how it works at Jong’s level — the level of “real” writers, the anointed who teach at universities and whose work gets called “literature.” It’s possible — just barely — that Jong opened the floodgates to unsolicited submissions from any female author who wanted to take her shot. But that would surprise me. It’s far more likely that Jong asked her friends, her friends’ friends, her writing acquaintances, maybe some authors she’d read elsewhere — which means they’re published in books or journals that Jong cared to read. What’s more, she hasn’t drawn examples from women she didn’t include in the book, which is suspicious both because the book’s so transparently in its promotional cycle (you don’t sell books by mentioning what you rejected), and because it seems to indicate that Jong doesn’t have other data points to offer us — or, at least, she hasn’t presented them here.

I don’t begrudge Jong trying to promote her book by writing an op-ed for the New York Times. That’s a great way to do it. But she’s the author of Fear of Flying. She has a responsiblity, if she’s going to start throwing around generalizations about my generation and the generation behind me, to at least reference a few of our celebrated authors, again, that aren’t Jong’s friends or relatives, and that Jong didn’t publish. That’s why God invented Google.

Because, as a member of “the younger generation” — if that means anything, I’m horrified that Jong lives such a comfortable life she can make statements like this:

“Is sex less piquant when it is not forbidden?”

Since when, exactly, is sex not forbidden?

“What happened to sex since Fear of Flying“?

Quite a lot, actually…like, the entire sex-positive movement, championed by people in my generation, on solid ground laid by people like Jong. My generation, that is — and the two or three that have come of age since.

The reason I’m so horrified is that I consider Jong to be an important thinker. It breaks my heart to consider Jong’s place in feminist, sex-positive and literary history, and to read some of her moving prose…and then have her engage in these sorts of vague, prejudiced, small-minded, middle-class, bourgeois, middle-of-the-road pseudo-centrist assertions. As a feminist man and a sex-positive activist, I feel betrayed. It breaks my heart to read this, in the “Rules for Writers” on Jong’s website:

It doesn’t get easier to tell the truth.  It always gets harder.  The deeper you go, the harder it gets.

The great revolution of women writing honestly about their lives, their sexual and emotional selves, quickly ossified into convention and was co-opted by formula-writers.  Female pain and female sexuality became commonplace.  Danger became safe.  Risk became predictable.  A new convention was born: the convention of the confessional novel.

Start again.  Go into your heart and find your own truth.  That will always be untarnished, fresh, red as arterial blood.  And pulsing.

The internet and female sexuality are topics far too important to treat with such casual disregard.