Violet Blue December 26, 2010 10 pieces of BRILLIANCE put forth by a DARING and DELIGHTFUL reader 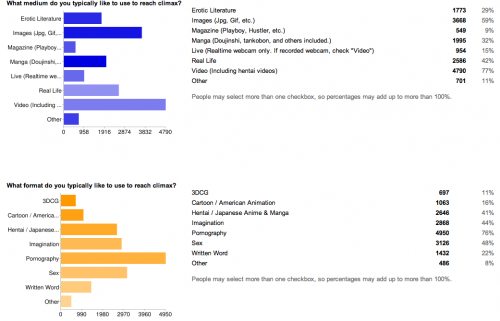 With over 6000 responses, the 4chan sex survey (LINK UPDATED) may be the largest sex survey yet. It’s quite comprehensive, and bracingly honest: I think that’s the beauty of 4chan and its inherent anonymity – and of non-state sponsored, non-commercial sex surveys. It’s going to upset some people, but to a good many of us sex educators and researchers (and sex/tech nerds), this is a much-desired snapshot of the online sexual landscape. It’s a kind of honesty I’d like to see come to more sex research.

I especially liked the distinction between medium and format to achieve climax. There are lots, so click through to see the whole spread – if you’re a mainstream sex “expert” I guarantee you’ll learn some new terminology.

(In these instances, respondents were allowed to select more than one checkbox so percentages add up to more than 100%)

Thanks to the friend who sent this over.

UPDATE: A post just went up on tech gossip site TechCrunch calling the survey “garbage” and encouraging their readers to take the survey themselves – TechCrunch’s way of ensuring that the survey is garbage by encouraging contamination of the data.

Good thing I saved the survey to my desktop last night before I posted this, when it was just hitting other messageboards. The survey link above has been updated to send you to the original survey with the original data intact.

This survey has brought a lot of hate out. I expected that, but I didn’t expect the degree to which TechCrunch has stooped. In fairness, their post calls the survey “garbage” after reaching out to get a comment from 4chans founder:

I emailed 4Chan founder moot a.k.a Christopher Poole to get his take on what one commenter called “One of the best representations of the youth in the 21st century.” “It’s total garbage,” Poole responded.

When asked if this was yet another example of media trolling (remember TIME’s ‘Person of the Year 2009′?), Poole clarified “It’s ‘real’ in the sense that a random user conducted it and I imagine he collected responses on 4chan. But the questions, answers, sample, method used, etc aren’t exactly scientific. It should be taken with a massive grain of salt.”

Nice leading questions, TechCrunch hack. Not sure what comparative studies or polls Poole has to back that up with – if any. And as I wrote in the comments of this post, sex surveys have a context that is important to consider, a context that underscores the value and uniqueness of this survey. I’m being criticized (and not by any of my sex ed peers, who have been sharing this link) for saying the survey is “honest.” If you spend as much time looking at sex surveys and sex studies of all kinds as I do (almost daily), you might be inclined to agree.

Interestingly, our TechCrunch trolls continue with,

If only sex surveys cited in mainstream media (like this set of lies and this set of lies-to-law) had a mod actively and knowledgeably working against trolling. Oh, and cared enough not to put forth any agenda.

In closing, I can’t resist pointing a few things out.

The TechCrunch post ends with, “(…) no plans to conduct any sort of official OKCupid-type survey.”

I enjoy OkCupid surveys as much as the next girl. However, these are not “official” outside of OkCupid – I hate to break it to Ms. Tsotsis, but this is also the “official” outlet of proclaiming that iPhone users have more sex. By the way, I think of Ms. Tsotsis as the lovely person who posted an awful piece about a woman who claimed to have been sexually assaulted by a Twitter employee, all of which was horrible for everyone, damaging and alleged, and the post mysteriously – but not quietly – disappeared. Credibility, much?

What a fucking idiot.