Violet Blue December 11, 2010 42 pieces of BRILLIANCE put forth by a DARING and DELIGHTFUL reader 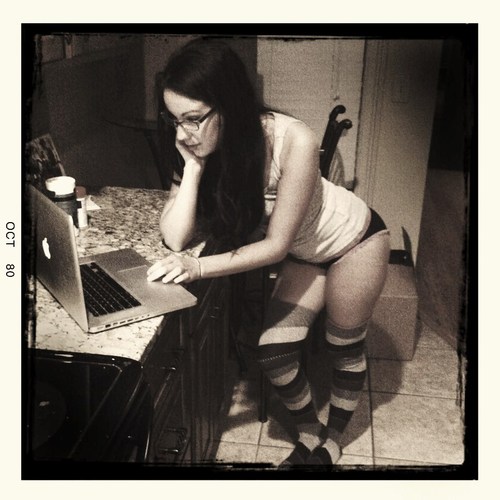 It’s that time: tell me who the top ten sexiest geeks should be for 2011!

These are the reigning Top Ten Sexy Geeks 2010. Can you feel the heat!? The sizzle of all those brains!?

I’ll be posting the Top Ten Sexy Geeks of 2011 on December 20, 2011. So now – the always-surprising, sexy geek blush inducing, server-smokin’ list is back. Every year since 2005, we get ten more gorgeous and brilliant crowd-sourced sexy geeks = life is good. I’ve been keeping a private list all year of geeks I think are hot, but this is only to supplement what you send me. I’ve been watching all year… So, have you –

Seen a hottie execute some heart-pounding code-fu? Have you been admiring a builder, scaler, or app writin’ babe you feel is unsung for their mad skillz and nerdy sex appeal? Heard of a sexpot who speaks all the romance languages (you know the ones, Ruby, etc.), built their site from the ground up, or is lurking like an evil mastermind behind a badass startup or tech blog? I do personally handpick the list, but I base it on *your* nominations every year.

Now’s the time to let me know: violet at tinynibbles dot com — also, you can Tweet your nominations @violetblue, or leave suggestions in the comments below (I approve anons, yo). I do all the research, but any links you send along help.

There have been all kinds of tech nerds/geeks on the list every year. We’ve had NASA engineers, cyberlawyers, hardware hackers, tech writers, developers – think outside the Tweet to uncover the fierce and delicious people who support, fuel, innovate and participate in Internet culture.

Lube up your browser and nominate anyone who is:

* Smart, nerdy and HOT.
* Has done something really amazing this year in tech, and you just totally realized is also irresistibly sexy.
* Someone known for being hot, but has hardcore geek cred that no one seems to notice.
* The total Unsung Hottie in your dev group.
* Tech bloggers or nerds you just want to point at and go, OMG hw4t!
* I keep the list gender balanced, but all genders and LGBT noms are *especially* encouraged. I also strive for racial diversity, partly because I’m sick of going to all these tech parties that are full of rich white people.

And, as always – single or not, it’s all in fun. There have been hot couples on the list more than once.

Not anyone with ten thousand followers qualifies for being a sexy geek. This list is about hotness with credibility. This is not what gets someone on the list – please, no:

* Celebrities, especially Hollywood ones and empty Twitterati.
* “Hot” chicks who do tech PR – and that is all they do. Write a line of code? Okay. Write a press release? Nope.
* Babes who pose in bikinis with video game themed accessories (sorry Girls of Nerdcore — though I do love my geek-flavored cheesecake).
* Models and actors who talk the talk but don’t walk the walk.
* Anyone I have had sex with. Sorry! (Okay, I was only sorry once. But it was *after* I made the list, okay?!)
* Babes, sex workers, “studs” or porn performers with “geek” and “nerd” plastered all over their paysites, with nothing to back it up.
* People who are cute, but no one seems to know why they have geek cred.

Also disqualified: anyone who’s already been on this list in a previous year.