My Talk at Gnomedex: On Life, Sex, Tech and Social Media

Violet Blue August 22, 2010 4 pieces of BRILLIANCE put forth by a DARING and DELIGHTFUL reader

I’m still reeling from the way my talk at Gnomedex came out; it was pretty much an unplanned 20 minutes, with the goal of talking about… well, exactly what I ended up talking about. But I just kind of let go… And to my amazement, I got a standing ovation at Gnomedex. In the ten years of the conference (Bethgo calls it, “the people’s TEDx”), there have only been three standing ovations, and I have the honor of being the only woman to have received such a deeply heartfelt compliment. It’s scary, and exciting.

I know you are going to like this one. It’s got teeth.

Time for some sex talk. We can’t make stable or sustainable online social media models for sexuality. Culture and media talk about sex in increasingly problematic ways: either as a bad and scary thing, or as something that doesn’t exist. Abstinence education caused spikes in STDs, unplanned pregnancies, and more, for instance. A sex-positive approach is descriptive, rather than proscriptive, and applies principles of harm reduction to sexuality. Understand what consent is, how safe sex works, and so on. Started podcasting in 2005, first female podcaster—but there was a backlash when iTunes started podcast support, and Violet was the top podcast. Another example of building a sex-positive community and then having the rug pulled out. If you want to see where things are most fragile, and where people are most hypocritical, start talking about sex. In social media now, we’re swimming through an ocean of bullshit and snake oil. Facebook is Wal-Mart for your communities. Why do Terms of Service vaguely exclude sex, and get used to shut down sex talk online? Do 500 million Facebook users never have sex? We need a harm reduction approach to social media. Gatekeepers shouldn’t decide what’s okay and what’s not okay to talk about. Sexuality is not a drug, not an illegal substance. It’s something that keeps us connected to our bodies. It’s beautiful, and gatekeepers can’t keep telling us it’s not.

Thank you Chris Pirillo and Imei Hsu, and the incredibly supportive Gnomedex staff. Thank you, people who watched, applauded, and shared your time with me!

I’ll do a post later highlighting a couple of other talks I loved. Until then, here’s a pic of dotBen and I, by our dear friend Brian Solis (and this might explain why I kept being mistaken for Lady Gaga): 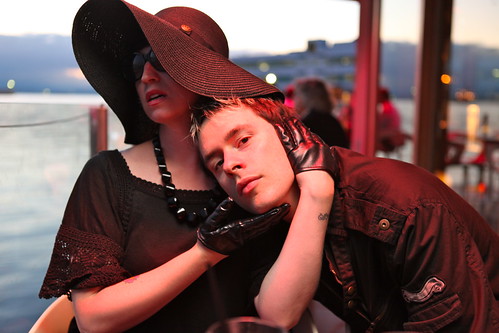