You Are Here: Home → 2010 → March → Will the last one at SF Gate / San Francisco Chronicle please turn out the lights?

Will the last one at SF Gate / San Francisco Chronicle please turn out the lights?

Violet Blue March 3, 2010 34 pieces of BRILLIANCE put forth by a DARING and DELIGHTFUL reader 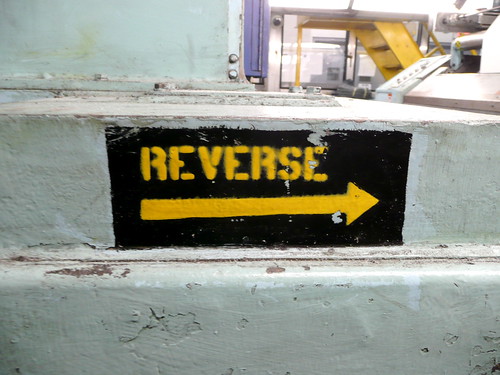 Image of The Chronicle being printed in their now-closed plant.

In 2006 I was tapped from the blogosphere to become San Francisco’s sex columnist. I recently discovered that the SFGate (the online home of the San Francisco Chronicle) is copying my column archives and distorting them. After four weeks of asking the Gate to fix them, they have made it clear that it’s not in their interest to do so. Additionally, they wouldn’t agree not to alter my content in the future. It appears that newspaper journalism and SEO is no longer going to be church and state. They do have the right to re-use my content, but it would be an understatement to say that it is my opinion that they have used their rights irresponsibly. I will no longer be writing my weekly column Open Source Sex (which I own) for the San Francisco Chronicle/SFGate.com.

My Google search results did not return my column’s original archive, as it always had in the past. Instead the top results were a copy of my column on an SFGate subdomain (articles.sfgate.com). The column had been stripped of all links, and divided across several pages. My bio was missing, as were all the comments. Freakishly, all the commas were gone. And the URL had been changed. The address was comprised of words; to my horror the URL had been keyworded to say “ashamed porn star” — the exact opposite of the article’s content. **See update** Worse, when I clicked around on the articles.sfgate subdomain I couldn’t navigate, couldn’t find content by author (or find anything), and was essentially trapped in a dead end of static content and ads.

I fired off a few angry tweets, with links to the altered content. Then I started investigating, and sent an email to my main contact at the Chronicle, basically stating that the articles.sfgate.com content was now higher-ranked in Google than the same content in sfgate.com, and that articles.sfgate.com content is of lower quality in part because it is stripped of links (and on at least one occasion mangled):

(…) my columns have been stripped of all links, are missing commas throughout, and the URLs have been re-created with keywords — some of which are offensive to my work and the subjects of my column. what happened to my work has happened to all content duplicated on articles.sfgate. (…) in my opinion, the subdomain is trading off my name/content for pageviews. there is no reciprocation in links, or biographical credit. this means in the world of search — and these results are top ranked right now — they are using my own content against me. as with the other writers, who likely don’t know this is happening.

I wonder if they are going to do this for all of their online content. the articles.sfgate pieces are many, and all are stripped of links. I wonder if they think that people who stumble upon Gate content via Google search do not value links/linking. and I strongly believe that to remove my links damages my credibility as an online writer.

My contact responded saying they appreciated my explanation; they didn’t have a full understanding until my email. I sent a list of requests that could fix the content: links, bio, commas, keywords. Nearly a week later SFGate had not responded, and I pushed for a response. By the following Monday I got a phone call with their VP: Digital Media. She pressured me not to talk about SFGate on my own Twitter account. I did not agree, but I did say that now that I knew who to contact about issues, I’d contact her first when I had problems in the future. (Now this seems ironic, considering how long it took her to respond to me.) I told her I would be fine with my content appearing on articles.sfgate.com if the necessary fixes could be made, and she indicated a level of difficulty in restoring the articles so as they would likely have to pull my content from the subdomain. The commas could be fixed, the bio was actually there but on the last page (unlinked). Restoring my articles’ links would be the dealbreaker; they could not do this.

Does anyone remember what I went through in 2006 to get them to publish articles with links?

Days later I got an email with excerpts from my contract (apparently they would now exercise their option to use my content any way they wanted), and was told that if I wanted my articles removed from the subdomain I would have to pay SFGate their estimated losses on ad revenue for my duplicated content.

I responded telling them that it was utterly perverse of them to suggest that I pay to have my content taken down. I honestly wanted to know: did they really expect me to say I would? No, of course they did not. By suggesting something so ridiculous, they ruined what should have been a relationship of allies, and this seriously damaged my previously good relationship with SF Gate and the Chronicle.

That I might have to explain the essential importance of link integrity and standards in online journalistic practices to someone in their position is astonishing. Not to mention I couldn’t believe anyone in this day and age would gamble revenue (and relationships with notable, reliable writers) on search engine results, or controlling readers’ experience.

It was becoming my strong opinion that the SF Gate / Chronicle had begun to behave as a bad actor in this space, with regard to the integrity of organic search, presentation, and discovery of news content. As many of you know, something like this goes against my firm beliefs and professional practice as a media professional. My contract with the Chronicle was loosely prescriptive with what the Gate could and couldn’t do with my content. That contract was signed in good faith and I’d enjoyed the servicing of the contract while the Chronicle operated as a good actor in the space. I told SFGate now that the Chron was no longer acting in good faith with the way it reproduces my content, I felt the current contract was untenable. I told them I couldn’t write another column for them until my contract reflected protection for the integrity of my work and reputation.

I received an email saying they could restore my articles to my requests (at this point, just links and keyworded URLs) but that they would have to talk to legal about my contract, as they were not sure how much it could be changed. Okay, cool: I waited. Then, nothing. For four weeks. Links were not restored, so it looked like they *could* do it, but would not. After a month — last week — I got an email from the woman I had been negotiating with “formalizing” the end of my contract, citing that I had not turned in a column for four weeks. After four years of an agreeable relationship, the woman who demanded I call her before talking about SFGate on my Twitter feed waited four weeks to circle back, saying that my column “no longer fit their content needs.” Indeed.

There is a much bigger story here. It’s all in what’s going on with archive duplication and the nation’s old media newspapers online. I think that the work done to the duped content is done for the purpose of SEO (Search Engine Optimization). The idea here seems to be stripping content, duplicating it, make SEO’d content that is a dead end for readers, and drive up results with cost per click ads. This is not a business plan. It’s a short noose made of long-tail content.

Make no mistake. Other national newspapers are doing the same thing (the same strategy is at the LA Times*, articles.latimes.com + latimes.perfectmarket.com). Add to this the forthcoming paywall for the NYT and we have a very volatile and brutal future ahead for old media. If this is all they’ve got for revenue plans online, including the creation of an atmosphere of mistrust with writers and our content, it’s going to get bloody. It’s not simply someone being uncreative and desperate to drive revenue; these tactics are not unsimilar to what I’ve seen in my years of watching porn sites struggle to make money off of content that people simply don’t want to pay for.

In my research I also found many redirects in Google results leading back to the articles.sfgate site on multiple subdomains; articles.sfgate, ww2.sfgate, sfgate.info, sfchroniclemarketplace.com, sfchronicle.us, m.sfgate, sfgate.perfectmarket.com. They all go to the same ad-stuffed, linkstripped dead-end. This is what I would call SEO spamming. It is now a challenge to find original versions of SFGate content in Google searches; the subdomain results trample the original content. The results also dominate related content: my own blog posts related to the content, which used to come up, are no longer in their natural search result position. What’s worse is that this dead-end trap of copied content isn’t breathing new life into old archives; I found three examples of other Gate/Chron writers’ articles being gutted and copied quickly — their columns and articles were reproduced at only a week old.

Dear newspapers: your industry is dying and it is your own goddamned fault.

Update: At SF Appeal, Violet Blue Explains Why She Quit The Chronicle/Gate. Most spot-on to me is this comment,

Aside from Eve, I’m sure most of those who comment here do not actually know Violet. She wrote her column from her own experience and point of view. It reached a wide-ranging audience. With sex as the topic, it was bound to offend many, titillate some, and amuse a few. These reactions are merely reflections of the sophomoric attitude of our culture towards any attempt to have an honest, open discussion about sex. However, her writing also illuminated many topics that people often avoid at their own loss and peril, and helped countless others heal the wounds of their past. If you’ve ever met her, as I have, and had a real conversation with her, you know she is an intelligent, sensitive, hard-working woman.

The Chronicle/SFGate has profited immensely from her hit count. Despite the fact that she is routinely personally attacked and threatened with violence, they did little-to-nothing to protect her from the psychotic element most attracted by SFGate’s pseudo-anonymous user comment system. Leaving the Chronicle/SFGate is hardly a set-back for her. Rather, it sets her free to reach the goals she is already working toward. Fly, Violet, fly! xoxo

Update 03.04.10: Commenter Ani Niow informs us today that the Gate has quietly and non-transparently made a change. “Looks like the SF Gate removed “ashamed” from the url of the article you were talking about. Still shows up in Google’s cache however.” (I screencapped it, for posterity.)

Here are some highlights from my column Open Source Sex during its time at the SF Chronicle / SFGate:

I miss writing my column.

* I found a total of nine American newspapers using this strategy.