This week in sexual hysteria: Apple loses it

Violet Blue February 20, 2010 14 pieces of BRILLIANCE put forth by a DARING and DELIGHTFUL reader 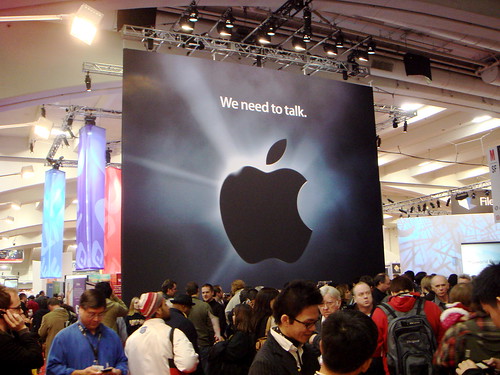 It’s no secret that Apple doesn’t allow adult content in its app store. And without writing too much about it here (I will be writing about it elsewhere), it’s easy for those without iPhones to kind of shrug and go, hm, well, that’s weird and prudish and out of step with culture and life, but whatever. However, now that Apple has released the iPad — and importantly, it does not have the cat-flavored Apple OS we know and love — with the iPhone operating system on what is intended to be a reader and tablet computer, it means that Apple has now produced a computer with a very closed system indeed. And a closed *minded* one. Right now the best article about it is The New App Store Rules: No Swimsuits, No Skin, And No Innuendo by Jason Kinkaid on TechCrunch. Here we can read in detail the unsettling and hypocritical list of things the company classifies as sexual, and sexually inappropriate. It’s like taking a trip back through time, with its antiquated definitions on sexuality as consumed by the heterosexual male circa 1980. In fact, it’s just bizarre, especially since it seems that we would not be able to even enjoy an Olympics figure skating app:

(…) One developer, who wished to remain anonymous, spoke to multiple App Store reviewers about the new policy. He was told, “there will be no more applications that are for any purpose of excitement or titillation”. He was told this included swimsuits — both bikinis and one-piece suits. Along with having dozens of his “sexy” apps removed, Apple also removed one that featured a popular fitness model in her workout clothes (the app was a marketing vehicle for the athlete’s line of protein powder). When he asked if the ban would also affect apps like Sports Illustrated’s swimsuit application, the Apple employee wouldn’t give a clear answer, but it was implied that the SI app would probably be removed as well.

Developer Jon Atherton, who is behind the popular application Wobble (which doesn’t actually include any sexual photos), also spoke to an Apple employee, and posted this list of rules to his blog based on what he learned:

1. No images of women in bikinis (Ice skating tights are not OK either)

2. No images of men in bikinis! (I didn’t ask about Ice Skating tights for men)

3. No skin (he seriously said this) (I asked if a Burqa was OK, and the Apple guy got angry)

4. No silhouettes that indicate that Wobble can be used for wobbling boobs (yes – I am serious, we have to remove the silhouette in this pic)

7. No apps will be approved that in any way imply sexual content (not sure how Playboy is still in the store, but …)(…read more, techcrunch.com)