Violet Blue December 31, 2009 1 piece of BRILLIANCE put forth by a DARING and DELIGHTFUL reader 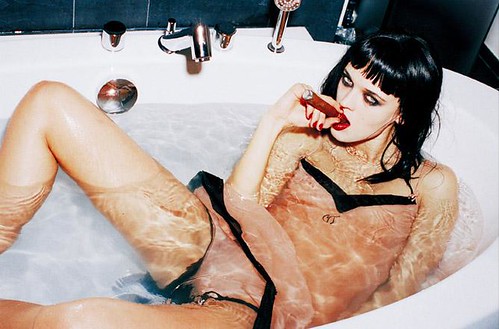 This week’s column for the SF Chronicle is more personal than usual, but that’s what’s great about being a columnist. It was written with the forethought that it would be my last of 2009, last of the decade, and published on NYE. It was also written with the acknowledgment that I was about to board a plane shortly after a foiled terrorist attack, an international flight like mine, and the hysteria I was literally about to walk into. Interestingly, this one got me a more severe amount of hate comments and mail than usual — each one has actually made me laugh out loud. Don’t they know it just encourages us now, especially when it’s about content they *voluntarily* consume? Also, I just want to add that I notice the freaks tend to get extra frothy whenever I mention transgender people… which I did here, of course. Anyway: hope you like it. Here’s a snip from You’ve Come A Long Way: Sexual Survival Skills for the Rest of the Century:

By the time you read this, the hope is that I’ll be snug back home in my little fortress of sex toys in the sky, perched in the hills above our beautiful rainbow-flagged Castro. Home. Preparing to board a plane in Arctic London today and reading about the “underwear bomber” has launched many jokes about panty bombs and snatch poppers. Significantly, simultaneously, we’re also at the end of a decade. It’s the first marker in the ten-spot for the new century, and it’s an exciting time, a “lucky I get to be alive” kind of time. Yet with one Unacrotch-bomber, we’ve been plunged from sexy excitement to helpless panic, feeling less like citizens of a brave new modern future and more like frightened sheep clinging to the edge of sanity — feelings magnified for flight, as we have our bodies and belongings publicly dissected by people we hope are here to help us. We feel increasingly like that nice farmer’s wife might be cooking one of our siblings later. Hear, hear for Gizmodo’s call to fire the TSA.

My own bag, is of course, brimming with sex toys. More than the usual kit of a girl’s necessary items; I visited London and met many people, several of whom presented me with a variety of gifts. Nothing that needs to be sent back ahead of time, but many items just might make for lively, possibly educational, conversations with TSA personnel.

At this writing, none of the new guidelines appear at first glance to affect the sexually-savvy traveler, and there are many of us. But they will. I’ll bet that as the weeks go by, we’ll start to hear horror stories from people with toys they forgot to take the batteries out of, passengers with piercings that were previously not a problem, and the worst possibility: transgender people who might have to explain to strangers (possibly unsympathetic or insensitive) that yes, they know their medications look unusual — or, no, I don’t look like the gender that’s on my passport. We have, of course, heard all these stories before.

It’s the end of a decade, and ten years ago we didn’t have to live like this.

Sex at the end of the last century was a different animal: Viagra was a new drug, but the honeymoon was waning (…read more, sfgate.com)