Will lap dance for code (NOT)

Violet Blue October 19, 2009 5 pieces of BRILLIANCE put forth by a DARING and DELIGHTFUL reader 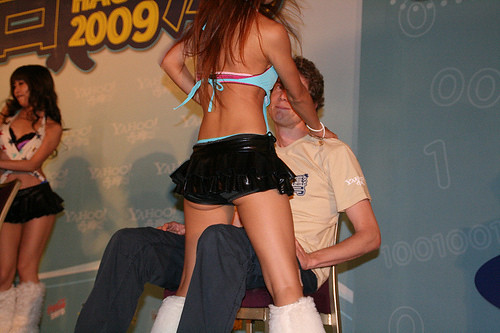 UPDATE 10.21.09: This image (and others in this post) were originally posted by cocakl with this Creative Commons license. Cockai has been emailed asking why they are no longer viewable. /UPDATE

Apparently female strippers and lap dancers entertained the presumably (presumptively) male, straight attendees of Taiwan’s Yahoo Open Hack Day (simonwillison.net). Wups! Which is all well and good if you’re a girl like me who likes getting lap dances from other girls, while stuffing a Yahoo-branded ball gag in the other half of me that is acutely irritated about the fact that women are like totally desirable at Hack Day if they’re (mild-flavored) sex entertainment. Yes, there have been go-go dancers at past Yahoo Open Hack Day Taiwan, but dudes — seriously. Get some male booty onstage to make the deal even. Because I’m all for hot chicks to get me in the mood to geek out. And AS IF the guys at Hack Day are all straight. Perhaps that’s the most disrespectful part. The gay guys were BORED.

It’s not shameful, just hilariously badly planned. And hey — what if the dancing babes were actually hackers? They’re probably not, but I know a good number of pin-ups, fetish models, porn stars and exotic dancers who hack and code. I love the flurry of flying assumptions and hypocrisy. I mostly love PR disasters around sexual prudery. I remember going with the Extra Action Marching Band when they played a private party for Yahoo — it was a filthy naughty performance, and it was done with tons of snark, and yeah — the dancing girls and boys in the dance team are all brilliant people when they’re in their clothes-on day jobs (Emmy award winners, etymologists, hackers, etc.). It added a dose of much-needed humanity, criticism, irony, prankiness and yes, sexuality to a crowd/event that seemed to desperately need it. Here’s the video from last year’s Yahoo Taiwan Hack Day event — what did everyone expect, anyway?

Update: the video below has been removed. The question is, was it because the user capitulated to individual, personal pressure, or YouTube? This was, by all accounts, a public event. You’ll also see that the Flicker images were up under a Creative Commons license, and now almost the entire set is unavailable. Don’t you wonder how this all went down? Flickr is owned by Yahoo, after all.

Sexy belongs everywhere. Sexist lameness should get the bum rush. Know what I mean?

Here it’s obvious there’s a clash of cultures. There’s a middle ground. But — whatever. Bring on the Hack Day babes! Especially if they lead secretly brainy lives. Quick, while PR is flailing… [More images here.] 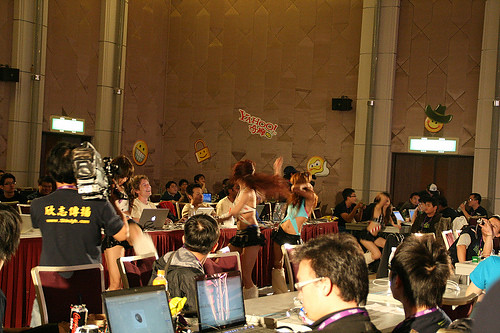 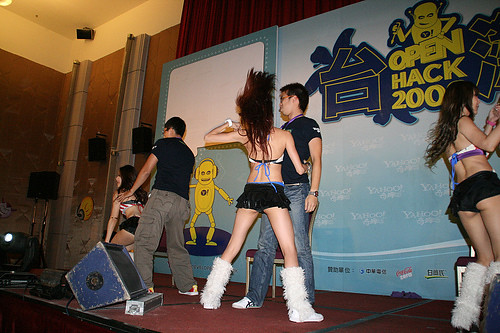 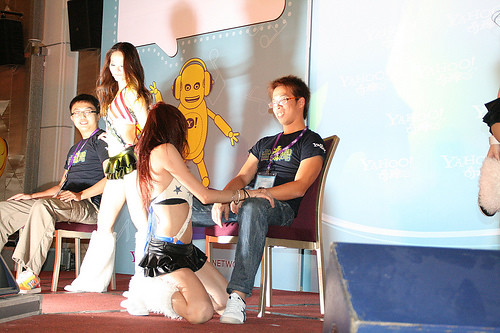