Violet Blue June 11, 2009 1 piece of BRILLIANCE put forth by a DARING and DELIGHTFUL reader 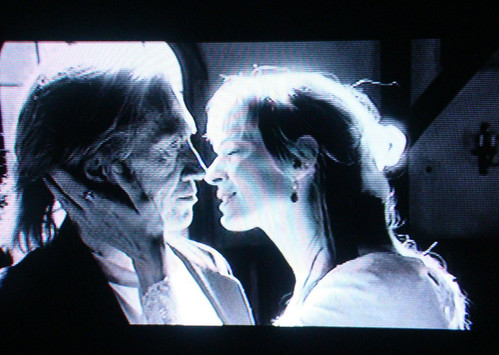 I saw [typo fixed] the autopsy photos and the pic of him hanging in the closet. So this week I wrote Bill Killed – Violet Blue: The passing of David Carradine and the controversy of risk-aware kink. It’s very much about the death of David Carradine, and as opposed to all the other media coverage about erotic asphyxia (Fox News’ “Sexpert”, Slate, etc.) I explain the sexual practice, the commonality of death with statistics from insurance companies, and about doing it safely. I asked, and received exclusive permission to run a portrait of Carradine (one of his last) graciously by Mark Berry – Photographer & Graphic Designer. The SF Gate did a front page redesign, and they wonderfully have me on the front page today — even now. Here’s a snip from the middle:

(…) Since then it’s been a circus of morbidity; photos of Carradine’s body have been leaked to the Internet, an autopsy photo and crime scene pics are making the rounds. I’ve seen them: he got a Y-incision for the autopsy, the left wrist is lacerated but not the right — which I find interesting considering he was right handed — though the Thai front-page tabloid newspaper image showed both hands tied above his head to the coat hanger bar. The Smoking Gun has the publicly available records Carradine’s 2003 divorce papers where his ex-wife talked about Carradine’s “potentially deadly” “deviant sexual behaviors” and Carradine’s family is avoiding comment and seeking FBI help with the investigation.

The whole thing is really sad, regardless of what the conclusive findings about Carradine’s death end up being — if we ever find out what really happened in that hotel room closet. It reminded me of the death of Michael Hutchence, former singer for rock band INXS, who was found dead in a Sydney Ritz Carlton as a result of suffocation from a belt around his neck; found nude, suggesting (including by family members) that his death was a result of autoerotic asphyxiation (although suicide was the official cause of death.)

Vaughn Bode, artist, died from autoerotic asphyxiation in 1975. Stephen Milligan, a British Conservative MP for Eastleigh, died from the practice combined with self-bondage in 1994; Kristian Etchells, British National Front party member, also hung it up in 2005.

The first time I heard about what happened to Hutchence, I remember wondering why anyone would want to “choke out” for an orgasm. Then I immediately thought that if Hutchence was indeed into asphyxiation, and had a lover or partner who was understanding of such a sexual practice, he might still be around today.

Update: My friend Jay Wiseman, JD (author of the highly respected tome SM 101) emailed me about the topic saying,

In addition to the dangers and concerns you mentioned, there is quite credible and sufficient reason to believe that in some cases only very brief periods of choking (or suffocation) can cause cardiac arrest. In some instances, only a few second’s worth of either can be sufficient. This is due to the effect of the vagus nerve on the heart. (You may have heard of somebody having a heart attack and dying from heavy straining during a bowel movement. Basically the same mechanism is involved in those cases.)