Violet Blue January 22, 2009 70 pieces of BRILLIANCE put forth by a DARING and DELIGHTFUL reader 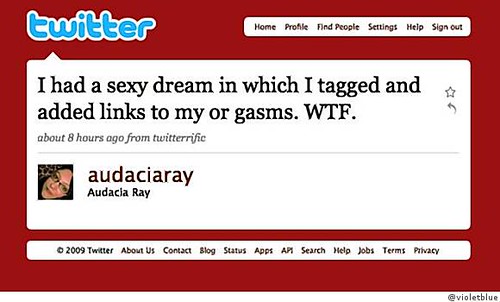 It was inevitable, and someone had to do it — I wrote a Twitter sex guide! There’s a great gallery of choice screencaps that accompanies Twittersexuality – Violet Blue: A Twitter Sex Guide. While working on this article, I compiled a crazy master list of sex personalities on Twitter: check it out after the jump if you’re curious. I know I missed some, but there are so many, it’s overwhelming. Here’s a snip from my very fun Twitter sex guide (it goes on with flirting tips, ethics about Tweeting during sex, sex positions…) —

(…) So the thought of sending a message out to the Internet (the world) while having sex might seem a bit rude. Or, it might be a turn on. For some, it just sounds weird; on the verge of orgasm can you send a coherent text message? Now that sounds like something a cyber-dominatrix might have a field day with.