The accretion of little things

Violet Blue July 11, 2008 42 pieces of BRILLIANCE put forth by a DARING and DELIGHTFUL reader 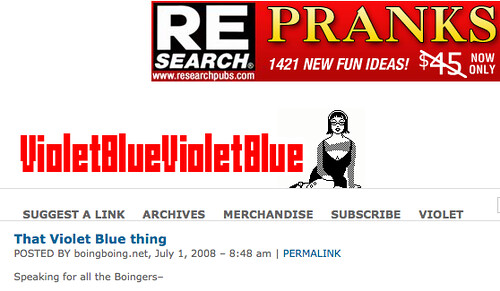 Walking into a Castro business today, the guy behind the counter saw me and called out, “Hey! I thought you were unpublished!”

I grinned and replied, “Hey, don’t make me unsmile.”

Later, at my publisher’s office, I got a big butch hug. “You know you can’t have a dyke romance without a little dyke drama. You’ve been initiated.” She also congratulated me on having the world’s biggest text message breakup.

I still don’t understand what happened, and neither does anyone else. It was brought to my attention that Boing Boing had removed all posts with even a mention of my name in them. I mentioned it on my blog. Other blogs pointed it out, people emailed Boing Boing. There was no response, except the deletion of remaining posts with my name in them. I did not pick a fight, I was in the dark. The blogosphere started to erupt. When it hit mainstream media, Boing Boing responded. They gave no excuse, and unleashed a vicious, brutal character attack. I was called names and heartlessly attacked, and people who defended me, or questioned the character assault were also attacked by BoingBoing and its staff. Yes, anyone can take down their own posts. But no one has the right to do it and turn it into an act of cruelty, sickeningly “for your own good” while trashing the subject. That’s repulsive. As recent as yesterday, the Boing Boing character smear continues. As do the obfuscation of facts. And journalists are repeating what they’re being told without question. Well, I have a few answers. There’s been a ton of media about this all week, and when yesterday’s Columbia piece was published, I decided that I refused to sit quietly without clarifying and correcting the facts.

“We don’t want to do that. We try not to be cruel. We try not to cause public drama or draw attention to people’s issues.” + “…it involved some personal, private stuff that I don’t tend to get into. Like whether someone’s character is this or that” (Xeni Jardin, Columbia Journalism Review + LA Times)

Wrong. In one instance, Xeni compared posts with me in them to “piles of shit on the floor” (after the day passed, her comment was non-transparently edited to remove this). Hayden called me “a strain[s] of evil” and there was more from both women.

“Except for the fact that they were deleted, the posts in question were unremarkable.” (Joe Uchill, Columbia Journalism Review)

“As the person who originally made the posts, she said, “it seemed natural to make the decision.” + “That’s how I felt with this situation. (I mean, there were other reasons for removing the posts.) But –- it was my work.” + “said she had removed the posts about Blue (all by Jardin originally); “I wanted to make my decision to take my work down,” she said.” (Xeni Jardin, New York Times, + LA Times + Chicago Tribune)

Not true. This new spreadsheet contains the author’s names along with more deleted posts, bringing the total to almost 80. 7.7% of the deleted posts were authored and posted by David Pescovitz and Cory Doctorow. Update 07.12.08: Is the word ‘weird’ getting redundant? It appears now that most of David Pescovitz’s previously ‘unpublished’ posts with VB links and references have now been quietly re-posted (or “ununpublished’ or ‘rewonderfuled’). Not all but nearly, and Doctorow’s is still MIA. I wonder why. /update

“Ms. Jardin, who says she was the one who took down the posts, conceded that the decision to unpublish was uncharted territory.” (New York Times)

False. This was not the first time. A MetaFilter commenter produced this page containing 407 BoingBoing posts that have been unpublished, mine included.

“If Blue has any kind of revenue sharing agreement for her San Francisco Chronicle work where she gets paid more if she gets more traffic, then Jardin’s action will hit her in the pocketbook. Similarly, while it’s unclear to me if Blue’s Tiny Nibbles blog and website has advertisements beyond a Helio sponsorship, Blue’s ability to get a replacement sponsor for the soon-to-be-defunct Helio will be constrained if her traffic goes down. Even if there is no economic impact (which I find unlikely), if Jardin removes references to Blue’s work then Blue’s Google-powered fame and influence go down.” (Mediavorous)

Wrong: deleting me had no effect on my pocketbook, nor am I “Google powered”. I don’t make my money like that. I do not have a revenue sharing agreement with the Chronicle: I get a flat rate for each column. Again, I did not notice that I’d been removed from Boing Boing; this argument falls flat based on that alone. But for the record, I added affiliates to this site at the end of last year; no advertisers. Prior to that, when I was still a friend of Boing Boing, my only affiliates were Amazon and a DVD porn rental site who I’m friends with. For every book purchase at Amazon, I make $1. This website is not profitable (thought right now it’s breaking even), and it certainly wasn’t when Boing Boing was linking to me. As for Helio, that was an introduction made by Xeni, and yet I still seem to have service. If I didn’t, I am also sponsored with another phone by Qik (thanks, Scott) and I have a phone from Nokia (thanks, me). And I invite anyone to attribute any of my successes to Boing Boing. My books? Me. My column? Phil Bronstein. My tech talks and lectures? Me. My appearances on shows? Me, and all of it, the merit of what I do and who I represent. I have gotten where I am on my own. Update: Mediavorous respectfully responded and clarified in More on Boing Boing and Violet Blue… and in the comments of this post. Thank you.

The New York Times piece was one I liked, and they’ve let me know they’ll be making corrections on the post authorship and the statement about my trademark: it’s not in process, it’s been done for a while. On the blogs, Rachel Kramer Bussell didn’t like the NYT piece so much and had her say here.

Hitsville has an excellent post about the aftermath, so succinct that it is the title of this post (runner up: About That Boing Boing Thing). A couple days ago, will shetterly posted crm nd pnshmnt, or immoderate moderation at boingboing, where he’d been banned from criticizing their moderation in the moderation discussion thread, wondering if it had started by commenting in the VB/BB thread. paradox1x hits the nail on the head — that this has brought up issues for bloggers that are practically existential — in What does it mean when our media re-writes itself? Mistress Maitisse is now super glad her breakups are not in the New York Times. Tony Comstock, having been swept up in the mass deletions, is thinking twice about his relationships to bloggers as a small business owner.

Michel Evanchik hits home in The Case of the Missing Violet Blue about the character assassinations, saying “Insinuations by Miss Hayden and Miss Jardin that Miss Blue is somehow responsible for the deletions through bad behaviour are vile, especially as they fail to disclose or deny Miss Blue’s assertion that Miss Jardin and her were “casual” lovers for a brief time. (…) It is hard to believe that some public action of Miss Blue prompted the deletions, since then Jardin would need no coyness in explaining herself. It is also unlikely that Miss Blue was banished for acting as a groupie, as has been suggested by many partisans of Miss Jardin.” Two Ideas is just uncomfortable about the whole thing. The Deceiver takes off the gloves on all fronts here.

Open The Future has an excellent interview with the people who made the Boing Boing Censored game, and answer the question as to why there’s no way to play me in the game.

It’s important to consider that the media hurricane from this issue did not get me as linked as much as it did for Boing Boing. It’s typical; though to me that is equivalent to reporting only half the story. CJR did only after I emailed them about it, asking why. It really sucks that my character has been trashed by Boing Boing and a couple virulent comment trolls — my two most persistent harassers enjoyed using it as a platform to say some truly awful and factually untrue things about me, especially in the Boing Boing “That Violet Blue” post thread. Comments which were allowed to stay. It’s particularly hypocritical to me that Xeni, of all people, would allow comments to remain on her ‘personal blog’ that contain blatantly untrue statements about what people think my birth name or “real name” might be. I suppose, in light of how ugly and vitriolic BoingBoing and Teresa Nielsen Hayden were toward me, these kinds of comments are indeed “on topic”. I think that with all the comment editing that happened, the Boing Boing post comments are probably the least accurate picture of what readers thought.

I think the best way to see what people really thought is to read the MetaFilter comment thread. It’s longer than Boing Boing’s, and is completely uncensored thoughtfully moderated. It is an actual conversation. In it, the whole bungled cover-up is writ large: MeFi readers catch BB doing a lot of very unsavory things. Besides insulting their readers and calling me names, you can see BB busted over changing their Terms of Service to fit their agenda, deleting comments, editing user’s comments, silently changing their own comments, and deleting things they don’t agree with. That’s not to say that many commenters on BB didn’t get away with taking them to task for their allegations that I lied, and many other points of fact that were unfavorable to BB. Some did, and did so eloquently. But the MeFi readers went the distance and investigated everything (including me and my body of work).

From MeFi: TO UNWHOM IT MAY CONCERN:

I still don’t know why they did this, but I plan on eventually finding out. What’s most conspicuous to me is that Teresa Nielsen Hayden, who I do not know, called me a “strain[s] of human evil”, indicating that whatever these people think I’ve done, it’s more than just a petulant breakup action. I think that someone, somewhere is lying. And when I find out what it is, I’m not keeping quiet about it.