Beers with me, the interview

Violet Blue May 30, 2008 3 pieces of BRILLIANCE put forth by a DARING and DELIGHTFUL reader 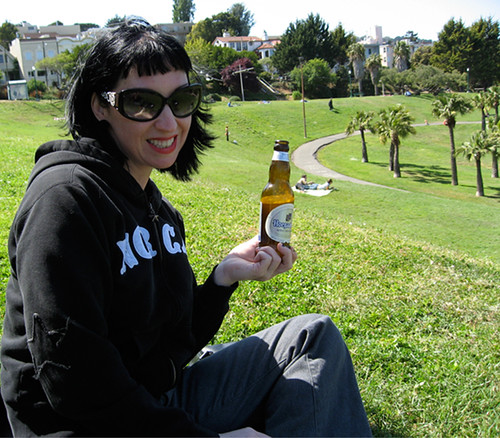 Photo by Justin Juul for the San Francisco Bay Guardian.

Recently I drank beer in Dolores Park with the San Francisco Bay Guardian, and they interviewed me — it was a really great time and the weather was perfect. The interview came out terrific and surprising; they asked me about my early writing career, my life as a homeless youth on the streets of SF and my need to document my life, and more. I think you’ll really like it. Here’s a snip:

SFBG: How was working at Good Vibrations?
Blue: It was cool. I don’t think I’d want to work there at the counter now, but it was fun while I was doing it. I would just hang out and talk about sex all day long, or make fun of ugly sex toys with my co-workers. And the strange quirky, homeless people who came in were always entertaining. We had an underpants gnome that was especially funny.

SFBG: What’s an underpants gnome?
Blue: He was this guy who would wander in with his underpants on the outside. He never stole anything, but he was kind of crazy. He would pick up books and show them to customers and be like “that’s my daddy.”

SFBG: Were you writing before you worked at The Good Vibrations store? I mean, did you study journalism in school or anything, or did you really just fall into it?
Blue: No, I never went to school at all.

SFBG: Oh wow. I didn’t know that. What’s your back-story then? How did you become Violet Blue?
Blue: Well, I had a strange sort of life. I never met my father, or any of my family, and my mother was a coke dealer and a crack-head. I ran away from home when I turned 14 and I lived on the streets of San Francisco. All told, I think I attended about six months of high school. So I never graduated high school and I never went to college. I got off the streets when I was about seventeen and just worked in cafes and restaurants until I got the gig at Good Vibrations.