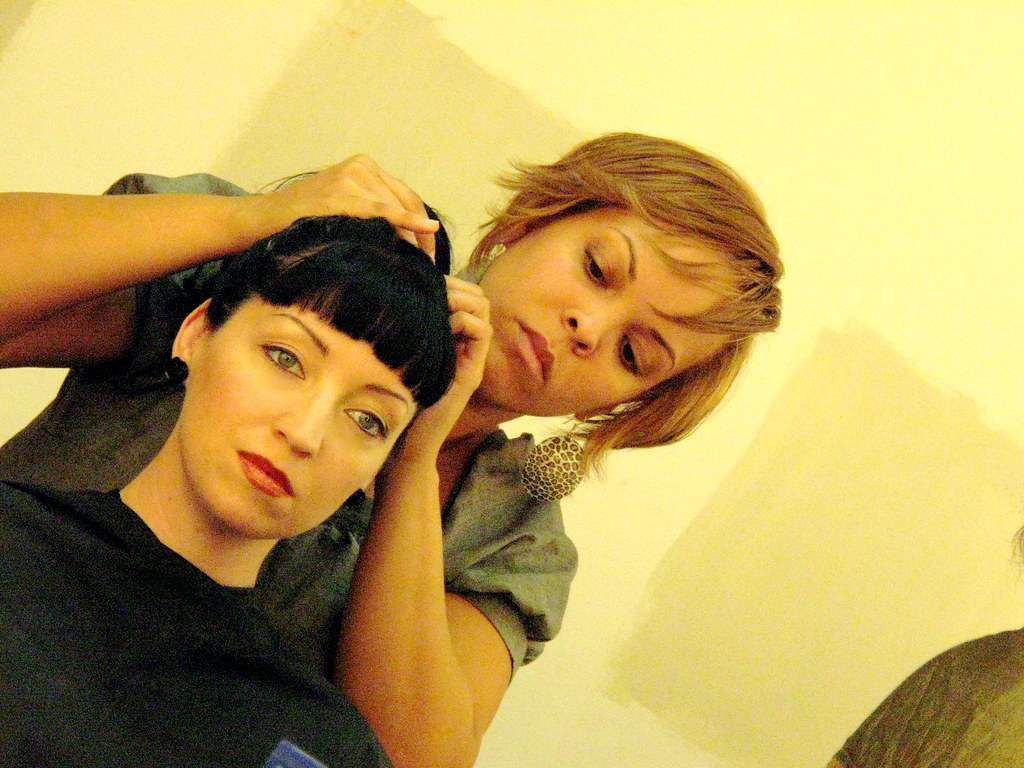 As many readers know, I was flown out to New York last week to be on a taping of the Tyra Banks Show. The video summary (with my green room and hotel footage) is here. You could always just watch this instead (but it’s giving me nightmares of grand mal seizures interspersed with wigs on sticks barking “that’s FIERCE” every four frames). The main points read as follows:

Still, it was really nice to see Nina in the hotel lobby when we were picked up for the show, and meeting Candice (Royalle) was fantastic — I love the hip, alt direction her company is currently going, and she makes some damn good vibrators.

Once inside the studio (shared with Martha Stewart, past smackdowns aside), we were put in our green rooms and made to sign contracts — specifically a big one agreeing to any “surprises” and humiliation, defamation, degradation and more, which I read aloud for the video. Tyra is, after all, *all* about empowering young women.

Tyra doesn’t visit her guests, nor does she appear except in a puff of wig glue and couture right as she comes onstage; any hopes of all my friends madly texting me on my Ocean of actually exchanging a word with the top model were dashed upon the rocks of feeling like her harried help. Every time I saw a producer’s assistant, I asked what was up for the show, and got a different answer. Then, in hair and makeup, the makeup woman saw the tattoo on the back of my neck and said, “oh, we’ll cover that up.” I said, ‘no. you’re not covering up my tattoos.’ She told me she’d get yelled at, and I told her to tell them to talk to me, and say it was my decision.

I felt ambushed at the last minute to change my appearance — especially for a tattoo that was on the back of my neck, and on principal. This is me. I was next pressured, and then threatened, in a variety of ways. She reapproached me and told me it was for their sponsors, that I had to look like an “expert”. Then that she’d get fired, then, finally, that I would not be allowed on the show. (I was already okay with that.)

The wardrobe guy came in and told me I had to be changed to fit the “look of the show” while muttering under his breath, “oh, the tattoos.” I think then I became what Hacker Boy has now dubbed me, the “introverted diva”, and calmly told makeup and wardrobe I’d be happy to compromise with long sleeves and a hair change, but no makeup to hide the tattoos unless I spoke with a producer and was told the *exact technical reasons* my appearance needed to be changed. I was told the producer was in a meeting. I politely said I’d wait.

The side note here is this: it’s just a daytime TV show. As I told the producer (who I saw quite quickly), I will not lie about my appearance or who I am, for anyone or anything. It does my readers, my listeners, my viewers, my friends and the sex-positive, non-judgmental message I bring and represent a disservice to lie. And, I told her, I have to look at myself in the mirror when I wake up the next day and look at myself. Would she have me change my appearance to look “less Asian” to seem more of an expert? (We should ask Margaret Cho, who also sports my tattoos.) Granted, my tattoos are my body modification choice, but if Tyra wanted the woman who wrote the O article, they’d have to be least as honest as O was about *who I am*.

While all this was going on, a friend (Top Model fan) who runs a prominent blog texted me, “omg r u with tyra right now?” I texted back, “they tell me I cant go on unless I hide my tats.” he immediately fired back, “fuck her. fuck her show. u get more pageviews.” I was feeling the love.

I live photoblogged the entire thing as it happened on my Flickr (with the Ocean).

Meanwhile, I watched the show on my green room monitor. Tyra sat between all the women who’d watched the porn, the ones who liked it and didn’t and watched her egg the women on to fight about it. One woman said it was disgusting and degrading, another opposed her and said she thought it was healthy, especially since she came from an abusive home and had never had a long-term relationship. Tyra pushed the women, until they were calling each other names, and I was just groaning inwardly that I’d agreed to participate in a message like this. I turned to the sound guy and said, ‘too bad the one they picked to be pro-porn is so broken. it’s so much more than that.’ When they were really going at it onstage I asked him, ‘you think they’ll keep fighting in the hall?’ He sized them up and said “No, I’ve worked on Povich, that’s much worse. They’re not the type to keep it up after.”

I answered, ‘well, it’s not like I give it a something-up, or a something-down,’ and the audience laughed. She said, “But your reviews can make or break a film, isn’t that true? Your reviews are pretty powerful. What do you rate them for?’ I told her that rather than the (ahem) up or down of a thumb, I rate adult films for their quality, context, chemistry, cinematography, attention to female pleasure, authenticity, and especially for the inclusion of female orgasms. And if the performers are too scary looking, like if their boobs look like Alien face-huggers about to burst out, I stop the film. The audience laughed, and she asked me, “So, do you even watch the films for the plot?” I responded, ‘you know, I find myself sometimes fast-forwarding through the sex to watch the plot.’ Then Tyra asked,

“So how can you tell when a woman is really having an orgasm?” I said, ‘well, you know, there are physiological signs.’ She urged me further saying, “I mean, we all want to know so we can fake it better.” She looked around the audience and the audience laughed. I was really supposed to respond — so I explained, ‘well, if you really want to know, a flush spreads across the face and chest, certain areas become erect and others swell, and there are muscular contractions that, with porn’s obsession with close-ups, you can usually, actually see.’

Back in the green room on the monitor, I waited for them to fetch Hacker Boy from the studio audience — and saw that Tyra was taking questions from the audience, about herself. The question I walked in on: she was explaining what she loves about being famous. I’d had enough of daytime TV’s artifice. I bemoaned the fact that women and porn was being presented in the safest context possible, and about ten years behind, at that. No mention of female sex bloggers, no Tristan Taormino and her kickass Chemistry series, nothing but a romance novel with the dirty bits left in and housewives from New Jersey calling each other “sluts” or “frigid”.

Afterward I rousted a few very hearty souls who wanted to stay up late and drink heavily with me in SoHo — namely sweet Dacia, and two people I love/adore very much and someday may happily get in a lot of trouble for.