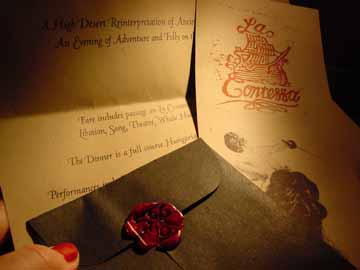 Well, now I can finally talk about it, now that it’s been posted on the local community arts resource (and resource for what’s happening in the real SF underground nightlife) the Squidlist. Months of hard work and intricate planning has led to an exclusive event, a dinner hosted by the Extra Action Marching Band, catered by SF gypsy restaurant Bistro E Europe, and with a roster of highly skilled musicians and performers, all at different elaborately constructed stages at undisclosed locations in the desert. It’s going to be like a crazy Emir Kusturica film meets Fellini, with a heavy dose of sex, alcohol and major costuming. It’s a formal dinner party in the middle of nowhwere. I’m on Extra Action’s email list, so I got to be one of the first to hear about it, and bought the expensive ticket right away — $100 to $150, you camp in the desert, and the official starting time is sundown, with the party officially over at sunrise. I’ve been working extra hard to be able to take time out from book deadlines to go — and it’s exactly the crazy, decadent break I’ve been dreaming of. The email read like this:

"This is a private and extremely special event and we want to let the people on this list know about it before we publicize it further… Setting Sail from a mystery location in Nevada…just before sunset to sunrise of the following day (should it arrive). Join the crew of La Contessa and Extra Action Marching Band… A High Desert Reinterpretation of Ancient Maritime Legend! La Contessa, The Great White Whale, The Rime of the Ancient Mariner, Sea Monsters, Treasure, and The Dreaded Sirens of Cocktail Island are all assembling for an epic journey!!!" 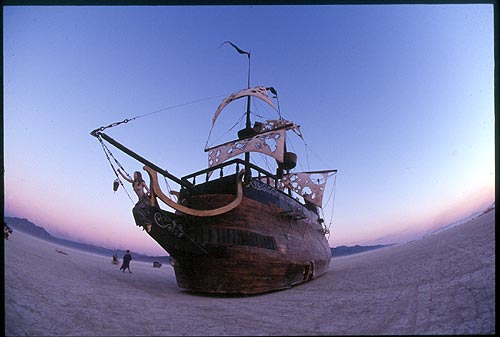 I’m so excited I could pee myself, except then there would be a mess. La Contessa is this amazing recreation of an authentic Spanish Galleon built around a bus, and though I haven’t seen it in person, looks in pictures to be amazing — I read about the engineering in an engineering magazine that fetaured it as a cover story, the designer being a cute horn player in the band himself. There’s a full deck, crow’s nests, a full bar inside, and I heard that the trapeze act will perform in the masts. Also, this local performace artist dude who is kinda funny if not just really quick-witted, Hal Robins will recite the "Rime of the Ancient Mariner" while the band plays accompanying music — meanwhile, the guests are to be ferried from isalnd to island in the desert for a formal dinner party and more performances. Who dreams this stuff up? Who cares — I readily coughed up the dough, and spent even more on a formal fetish outfit. That evening is promising a meteor shower delivering 60 shooting stars each hour, and all in all, I feel like I’m going to an adult Dinsneyland — better yet, a trip into my favorite parts of my all-time favorite movie, Black Cat, White Cat. Tonight I might be writing about porn videos that wish they could convey creativity and decadent sexual expression; this weekend I’ll be setting sail for La Dolce Vita in all its turbulence, chaos, sweaty sexuality, musical mayhem, loss and redemption, and alcoholic exuberance. I’m bringing lube, a whip, a camera, high heels, stay-put lipstick, a shimmery gown, goggles, instant espresso, and I’m shaving everything, because you never know what might happen out there, alone in the desert with 40+ gorgeous musicians and 100 strangers, at a formal, all-night party…

Other things on my mind: two "new," though not really at all new permutations of male sexual identity now floating around the collective conscious ether. One is the "Down Low" phenomenon, where men of color (primarily African-American) identify as straight but have sex with other men — it’s surprisingly common, HIV is a huge concern, and lots of these guys come from very macho environments — they keep their activities on the "down low." The other, my personal favorite (though till now they haven’t had a name) is the "metrosexual," guys who like women but are so comfy with their sexuality they mix masculine with feminine in their methods of dress, are groomed like gay men, and have associations of all sexual identities. It’s like this guy I know — he dyes his hair, wears nail polish, plays trumpet superbly in several bands around town, wears tight little t-shirts, sometimes wears a skirt/pasties, and always has girlfriends. One time I heard two macho dudes making fun of him, and I let them know that that my friend gets girl action more than any guy I’ve ever seen — and unlike the macho guys, he seems to know what to do with all the attention he gets. He wears it like a tailored suit.