Violet Blue September 13, 2010 1 piece of BRILLIANCE put forth by a DARING and DELIGHTFUL reader

I’m excited to point you to a big feature I have front page today on SF Appeal, This Zen Master Teaches Buddhism How To Grow Up About Sex Already. It’s a personal review of Brad Warner‘s fascinating new book Sex, Sin, and Zen: A Buddhist Exploration of Sex from Celibacy to Polyamory and Everything in Between. In the article, there is also a calendar of events for his San Francisco appearances (including KRON-TV) over the next week, so do check it out. The book is amazing; it brought me a bit of personal healing about heartbreak, and being perceived as a “sex advice guru” which I didn’t at all expect to find — especially since I am not a religious person. Here’s a snip from my article:

A couple years ago I got to meet Zen Master Brad Warner when he was in San Francisco doing appearances for his then-new book, Zen Wrapped in Karma and Dipped in Chocolate. 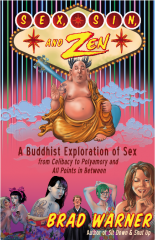 I was interviewing him for Geek Entertainment TV about the book, but as it was me, and as Brad has a column for softcore alt pinup site Suicide Girls, we got to talking a bit about sex and Zen Buddhism. He told me he’d gotten a hard time from certain kinds of Zen purists for writing on such a website, but at the same time he had ten times as many inquiries about sex and Zen, to the tune of people simply trying to find answers to their questions about how sex and Zen might, could, should, or should not go together.

This, among many other compelling questions and experiences, inspired Brad to write Sex, Sin, and Zen: A Buddhist Exploration of Sex from Celibacy to Polyamory and Everything in Between.