Violet Blue August 21, 2009 8 pieces of BRILLIANCE put forth by a DARING and DELIGHTFUL reader 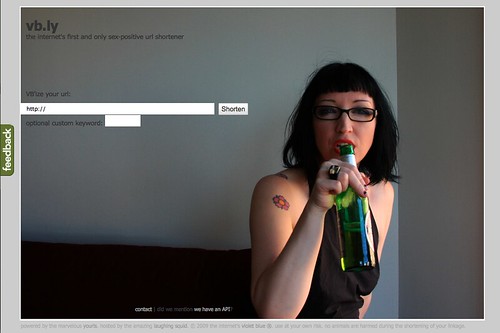 Last week I launched vb.ly — the world’s first and only sex-positive link shortening service. Scott at Laughing Squid added in his announcement post that it was built by dotBen and hosted on Laughing Squid’s new awesome cloud hosting service. We’re floating in the clouds, awww! I added that we included an API so people can do cool stuff with it and soon we’ll make it so anyone on WordPress can also automatically generate vb.ly URLs off their own blog. Right now, I’ve got a plugin running on TinyNibbles.com so that whenever I make a post, a shortened vb.ly URL is generated for each post. That feature lives inside the blogging interface for the moment, but we’ll be moving it to the blog so that each post offers readers the short link, and also a “tweet this” button to click and send it to their Twitter stream with the shortened URL. There’s so much that can be done with this… 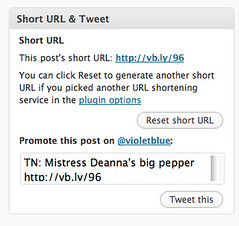 We didn’t really mean for it to get so much attention, but it did. dotBen shot the photo of me at a gay pride party in June, and he did all the design; I walked in and saw the photo on his laptop and burst into a wicked grin. All the attention it’s getting is a good thing, but it’s also funny — like last night stumbling across Euro press to discover them making aggrandizing statements about “our intentions” for market domination. I happened to be filming when we found one last night and as you can see we were both like, wow I never said that, and laughed.

But we *did* say the things in this cNet article: ‘Sex-positive URL shortener’ Vbly launches. And then some nice things were said in cNet’s 404 podcast, however we don’t agree that seeing a “vb.ly” link means that it’s automatically NSFW — it’s a place where you CAN put NSFW links, but it’s not *exclusively* for non-worksafe links. It’s just a service which openly states that it won’t discriminate against you (by filtering or removing your links) if you do. Revolutionary, I know. We are talking about adding an optional button that would create an interstitial (gateway warning) page to let your clickers know they’re visiting a page they might want to view on personal time. It’s just a matter of us getting a second to get a break together from work to create it. It’s just us here, and production is live, as-we-go.

It’s exciting. In a comment I wrote that some people have asked me how a link generator can be sex-positive. It’s simple. Unlike other automatic services run by humans, I’m encouraging the use of NSFW URLs. So many of us have used services to later have our content removed or disappear because the service suddenly decides to “clean up” its image. I’ve often worried that a link shortener service will refuse to use one of my links, or get sold to a big company that pulls my links because they have the word “sex” in them. You can trust that we will never do that.

For the cNet interview, Rafe Needleman also asked me,

> What shorteners have removed NSFW links?

I replied: None to my knowledge, but taking a look at the landscape, link shorteners are a hot area. We’ve seen many launch in the past few months, and several companies are jumping into the shortening game as a service. So it follows that, as with every service that’s gotten big, it’s highly likely we’ll see at least one instance of one of these services groom themselves as “family friendly”. And there’s nothing wrong with that, unless they retroactively enforce work-safe rules on their users. Tired of being worried about having accounts, content or links pulled when companies change, I thought it was time for a service to be up front about the Internet’s inherent sexuality.

It’s not an “adult” service, but an approach that normalizes sex, and no one has to worry that they’re playing by some set of invisible rules — or that the rules might appear out of nowhere, or suddenly change when a company decides to change its TOS. Did you know that (according to the EFF) most major companies change their TOS almost *weekly*? They just don’t tell their users. the EFF tracks these changes closely; I’m hoping they’ll RSS these changes so someday we can subscribe to say, Facebook’s changing TOS…