You Are Here: Home → 2008 → January → So, everyone’s asking what happened between me and Steve Jobs today…

So, everyone’s asking what happened between me and Steve Jobs today… 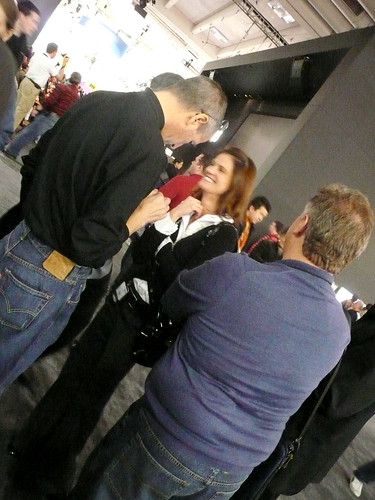 Update 01.16: this is now on Digg, “Steve Jobs tells off fan, calls her ‘rude’: Blogger and podcaster Violet Blue approached the Apple CEO on the Macworld floor to ask for a photo — and got completely blown off.“.

Since so many people are asking me what happened (“VB+SJ=Trouble?” “heard you had a fight”)… So, I saw that Steve Jobs was just hanging out on the Macworld expo floor, not in conversation, not talking to anyone, and poking at his phone in the middle of the public so I walked over. Thinking a girl — in this case, a fangirl, me — will never get anything if she doesn’t ask for it, I lightly touched his arm and said “hi”. He looked at me, and I blushingly asked if it would be okay for me to ask if I could take a picture with him. I didn’t say my name or anything else, I was just a girl. He told me curtly, flatly that I was rude. And turned his back to me. The small circle of people around him sniggered. That woman you see actually snort-laughed at me, and rolled her eyes.

I walked two steps away and stopped to take this picture of his back; then I was instantly filmed and livestreamed by Robert Scoble. Watch my reaction in the video, “Violet Blue Gets Told Off by Steve Jobs” is embedded after the jump, or you can click it here.

It’s not a happy feeling to have been the poster child for iTunes podcasts for so long (I still hit the top ten, yo) — even famously when it launched — and be humiliated like that. Steve Wozniak was so much nicer.

That’s the first time I’ve ever “fangirled” anyone. And it’ll be my last.

Quick update: Oh — and my whole Macworld 2008 set is here, I’ll blog the highlights tomorrow. Today was the Maxim interview, Macworld and writing my column….