Update 8/17/07: This post is not my resignation from SRL. It is a rant. I am still a member of SRL, despite the best efforts of rumormongers.

I tried to write this five days ago. 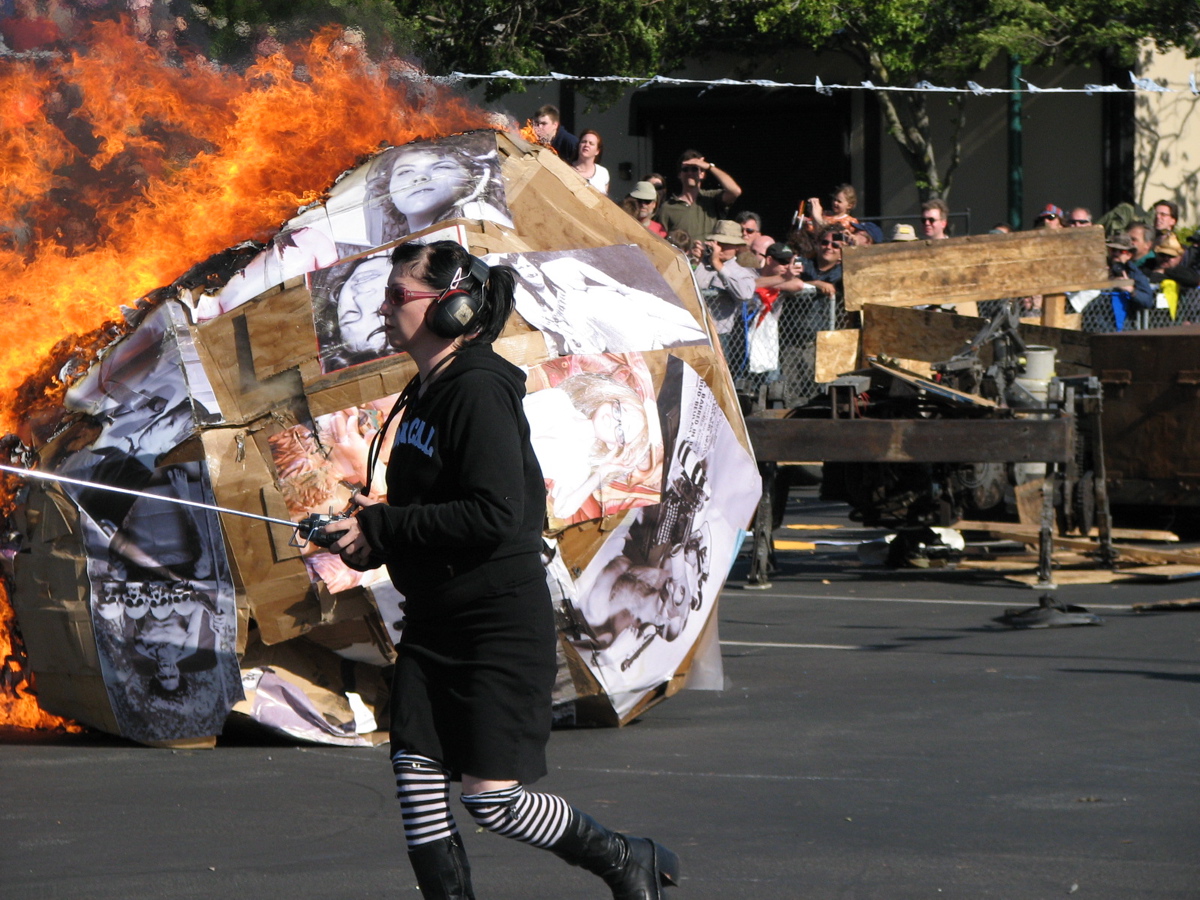 “we all need a giant photo of ourselves radio controlling the end of the world as it all burns down”
—my closest friend, re: this photo

My hoodie still smells like fire, and my skin still crackles with certain electrifying and forbidden memories. It was loud. The show was small and yet miraculously, it was the full SRL effect at Maker Faire: audio overwhelm, concern for safety, the fine line between the safety of technology and violence of machinery in a tangled mass of confrontation, no script, all surprise, destruction, smiles, no sleep. Aphrodisia, dystopia, heartbreak. I worked for weeks with little sleep, never gave up, ran the most beautiful machine in the world until I broke her in half like a lover and crawled away literally scarred from the razorblade beauty of our bed.

After the Running Machine broke, I still ran her, finding that sweet spot only a few operators know about on the Futaba (controller) that makes her shudder and jerk on her feet until someone else shut the engine off.

It should have been louder. After, everyone slowly went mad; I was flamed to the bone on the SRL list for three days following the show, while I tended to Hacker Boy flat-out with viral bronchitis (through the week, actually), the white noise of his pale skin at odds with the black sound of his lungs. Something about the sound of the machines that day blends in my mind now with the screeching mania heard on the SRL list, the flaming when no one hears you, and they just attack. Someone screaming at you, via email.

About the show, Wired wrote,

Survival Research Laboratories put on an unannounced show at the end of the Maker Faire today, nearly setting the crowd on fire — literally — as wind whipped flames and hot ash towards the bleachers. After just ten minutes of gasoline-powered, ear-splitting robotic mayhem, event staff cleared the stands. Sensible people were leaving anyway, as the smoke was getting thick and there was, at least once, a noticeable smell of burnt hair, as ashes landed on arms, heads, and pants. But for all that, there was a kind of transcendent, heartbreaking beauty to the robots as they walked, rolled, and lumbered over the asphalt.

This blog post is my experience, with photos from friends, and the rest of it is after the jump. Top image by Lori Dorn, second image by Jake Appelbaum.

Regular readers know I’ve been working in SRL for 11 years, and that we worked overtime (on a skeleton crew) for weeks to bring machines to Maker Faire and do a demonstration almost two weeks ago. The setup video I shot (and Mark loved) is on this show page. My Maker Faire video wrapup (there’s no show footage but a mesmerizing timelapse of the SRL booth by brilliant Ian Williamson and more) is here and here:

The best image wrap post is, as always, on Laughing Squid.

I was having a blast working with a tiny, tiny core crew loading machines often with just one other person. At SRL on late nights in close company with the guys, there’s this stinky malaise and lack of sleep that makes everything somehow more surreal and, well, special. Hardly anyone worked on this, but it was fun because so much actually got done and there was that persistent ‘we’re naughty’ feeling that always gives one a spring in their admittedly exhausted step.

So what happened at MF? Well, SRL had a booth where myself and others hung out for two days and explained the machines to anyone who asked, and I met some really, really cool people (some of whom I hope to stay in contact with). The on sunday after the Faire, we ran machines. As always, the fire department showed up. I had no idea I was even running a machine until two hours beforehand; I had expected to move the machines again and just watch. The big ball of cardboard caught on fire and the wind was unpredictably strong; the Power Tool Drag Races loaned SRL the tool racing area so the front of the playing field was festooned with strings of plastic checkerboard flags. Before I even got my machine out of its corner, those flags were on my ‘kill’ list as I wanted to tear them down with the robotic arm. Before I could do that, I decided to push the ball around, and then take a “stroll” through the big wooden house prop.

I had fun walking my machine all over the parking lot to try and show it off to the whole sprawling audience. I was all over the area — it was intense because it was the first time I’d run the machine solo, with no second, but on a couple of occasions I was being shadowed by photographers (one who has history shooting in Iraq and Hurricane Katrina) so I felt safe. In fact, I *always* feel safe at SRL shows. I was on the other end of the playing field from the fire; I was destroying the makeshift house by sheer feminine force, delighted to drag the debris over to the audience on my end of the racetrack. Smoke, delirium, focus, delight in showing people what the machine can do — and its behaviors.

When the Running Machine was shut off, I marveled at the cracked weld in the center seeming to almost broke her in half. I was standing there marveling when someone came over and told me someone got hurt in the audience (details, all’s well). Still, never good news, moreso with so many friends watching. 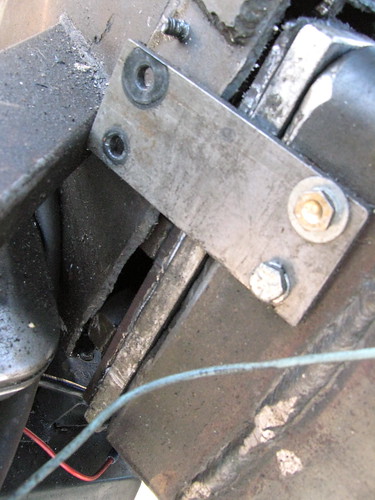 About an hour before the event, Hacker Boy came to visit me through the fence — he was swaying, coughing and feverish. He was so sick, I was worried, as was Mark who sent me to take care of him the minute my machine was shut off. When it was over, I kissed Mark goodbye and raced back to Hacker Boy’s house where I found him flying with a fever, freezing, coughing. I started caring for him, and called to check on the aftermath at the fairgrounds and I learned all the details, and that the machines were staying put until everything was sorted out. Meanwhile, Monochrom kept my couch, um, safe, and bloggers LOLigagged in my kitchen.

There is no code of conduct in SRL, no rules about communication or policies — except that it’s Mark’s gig and even he often says, “I just work here”. Each volunteer is self-motivated and we’re all involved for our own reasons; love of the hard hard work, the learning, the machines, the people, the subtext, the humor.

Then I was flamed by women on the SRL list, and I dropped out of communication with everyone. I do this when things get fucked up for me. And being attacked publicly, humiliated on the list that’s supposed to be my family, well, let’s just say it’s just like old times. Back to zero. Scorched.

The subsequent flaming on the SRL list directed at me, interestingly, was led by one woman, who’s been around just a few years, but was speaking with authority for the group. It was all over distribution of media; blogging, vlogging, and SRL (and non-SRL) individuals publishing media. I sent out my opinion, not directed at anyone, on new media and how it’s impossible to control, and how no matter what SRL might want to do with media we (they, or anyone) can now only ever react to the users of YouTube and Flickr and Wired’s Gadget Lab Blog, who had their media up, fast. This is a media environment I participated in creating and am extremely active in (indy and MSM now), and I know it well. It was strange to get attacked for saying these things when I didn’t even have any media to post. I just wanted to offer up opinions. What Nina came back with was a personal attack (saying she ‘hated flamewars’ but…) — actually several emails, even one she said thought she only sent to me. Never, ever offer a contrary opinion to someone having an episode who likes the ‘send’ button. Lesson learned. But then, I thought it meant something.

She sent emails to the group addressed at me, cruel attacks that second guessed all of my motivations, shouted with caps, used phrases like “you didn’t even fucking call me”. No, I called someone with experience and authority. While I watched the ladies’ pissing match soak the SRL list (and I’m actually not into watersports, yo), I sat next to feverish Hacker Boy in his bed, trying to make him eat (he fought me about food) and watched it all wash into my inbox, everyone’s inboxes. A couple of other women on the list read Nina’s email as “Violet’s being wrong” and joined in her crusade which was repeated in a whole new round of attacks when I responded (once) to say that I didn’t want to post any media, just wanted to bring up some questions on behalf of another photo friend who’d been sending me questions about what he should do. The kicker was the private email insult from the director’s wife.

It’s all so fucked up for me, to have my trust and motivations questioned by the community I’ve spent a third of my life with, giving my blood and reputation to. My entire life’s work, aside from spreading sex-positive sex information around because it’s the best contribution I can leave behind (and the most subversive), is communicating through (or rather, gaming) media on behalf of communities. With communities like LGBT, trans, BDSM — all sexual minorities, persecuted, attacked — I establish trust with them through my actions and character. I prove that I deserve their trust; with trust I get access to tell their stories. That trust, in my life, has been valued higher in some cases than my livelihood, my freedoms, and even lovers.

When I joined up with SRL, I was a street urchin turned shop girl. Now, they don’t even know who I am. The smell of machine grease on my boots is bittersweet.

I was offered support by some serious old SRL heavy-hitters; but unfortunately only in private. Did anyone speak up for me on the list? Hacker Boy, and he shared with me the vicious private emails he got from two women.

It was a savage sideshow. You always remember in situations like this who trusts you, and who has your back. The machines are in their home now at SRL, I helped move them back in two mondays ago in the middle of the flamewar. Hacker Boy still has difficulty walking around too much and tires easily, and I forced him to a doctor midweek, but he is doing much better, I think. At the end of last week I was dealing with the “hope you starve” lady, and yet *another* woman who sent me “After reading your blog this week I have realized you are truly a jerk off. You really have some fucked up anger issues that you need to work out instead of crying about your shitty childhood and bitching about emails. I thought you were supposed to be a sex and tech person?”

I’m blogging my way out of all this pain. But this is my blog, my place, for my experiences. And I’ll never stop being human here, no matter what that shows you.

I’m just sitting here alone as ever, trying to finish a book, as always. Trying, in dark and silence, to turn a negative into a positive picture.