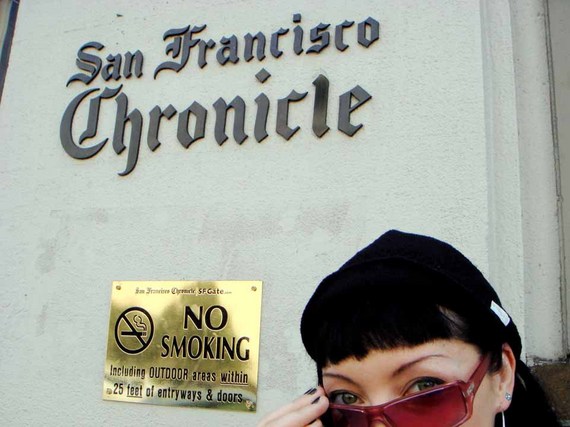 Not just ‘plucked’ from the blogosphere to freelance for a 141-year-old mainstream media institution; Phil Bronstein hand-selected me to be their frontline sex writer, with a column and everything that comes with it. I just got home from the Chronicle building — today was the final meeting with the PR department, and to set the launch date (I wore my Laughing Squid shirt to the meeting). At one point David Wiegand said, “We’re just making sure it’s okay before we plaster your face on buses.” I don’t remember my reaction to this, though my memory tells me I shrieked like a little girl and ran in tight little circles with clenched fists tight against my sides in the middle of the circled chairs of Chron/SFGate staff. I think I actually said “yikes” in an extremely composed way. I’m pretty sure he was teasing. Ulp.

My column launches on September 21, the day before my birthday. It will be every thursday, and I’ll have an RSS feed for you to subscribe to. The Chronicle is planning all kinds of crazy publicity for the launch, and the column is called “violet blue: open source sex”. Nothing else will change; my blogging, my work, my snarkiness torwad MSM and the Chron, none of it. Yay!

I am, in fact, totally freaking out right now. This was the big news I’ve been alluding to for the past few weeks. If you want to hear the whole story, what I’m up against, how important I feel this is for local sex culture and online media, how fierce my deal is with them and what I think about being a blogger writing for a paper I’m extremely critical of, it’s all after the jump.

Update: the response to this has been so overwhelming I’m putting comments and blog posts in a chorus of lethal machines sing congratulations.

This has definitely been the most memorable instance of finding out who follows my blogging. A few months ago I saw a familiar name in my inbox, though not familiar in the usual way. It was from Chronicle editor Phil Bronstein, complimenting me on my blogging (!), and asking if I was free to meet and talk about new and old media (subject: “MSM/the future”). For real — I thought it was *very interesting*. So I asked him to meet me at Cafe Flore, and I sipped iced coffee while we chatted for nearly two hours. I kind of grilled him about a lot of things; I just had a lot of questions to ask someone like him, know what I mean? I told him what I thought about his paper’s blogs and position in the online world (not impressive), and asked him what he did all day, how he got the job, and what blogs he reads. I didn’t want anything from him, didn’t have anything to lose, and thought it was fun to just chat with this guy.

He answered all my questions, and we wound up talking about SRL (he’s a fan) and sex culture in San Francisco. He told me he wanted me to write for the Chronicle. I told him I wouldn’t compromise anything. Or change what I do. He said okay. I didn’t blog about it then because I wanted to see what happened.

There were more meetings over the weeks; one memorable instance had me raising my voice over a big table telling someone from SFGate that they *should* be serving their community better, and he telling me they *were* serving their community, and me telling him they *should be* — and Bronstein breaking it up. In another, Bronstein told me that some of his staff were having seizures after looking at my blog. And I said, that’s going to happen a lot. (I actually said, ‘You know, like 88% of your staff is going to have heart attacks. I’ll FedEx you a D-fib machine.”) They seem to know what they’re getting themselves into. Bronstein put a lot of thought into his decision, and into which editor he set me up with. Imagine my surprise when I got an email that said, “Hey Vi I’m your new editor. And as far as I’m concerned, I just got the most fun assignment of my career. I think so, anyway.” — this was from David Wiegand, who edited the Sean Penn series, among other controversial editing jobs. I feel I’m in really good hands.

I negotiated a really good deal for myself. My voice, my content, my sex-positive, all-gender, all-orientation stance is firm; they have agreed to run every edit and piece of publicity by me for approval; and after first publication rights, I own the columns, I keep the content. They’re taking a huge risk, and a huge gamble, and they’re letting me be me.

Totally not what I’d expect from an old mainstream media institution (though I think this is just the beginning of the Chronicle’s aggressive new direction online). It’s going to be very interesting. I think I’ll get a lot of hate mail. I think people at the paper will keel over and projectile vomit pea soup. But I’ll be an embedded blogger. And the people I’m working with there seem to value that.

Are you wondering what I’ll write about? Sex in San Francisco, of course. I won’t be beating the tired old dead horse of quesiton-and-answer sex column format — it’s sooo over, and sooo boring. No “ask the sexpert” bullshit; nor will I be writing about myself. To be totally honest, I think it’s tacky when sex writers and sex educators write about their personal lives, so even though I’m dating and sexing in the city, you won’t read any ‘Sex in the City’ triteness in my column. It’s going to be funny, sweet, entertaining and real. I’ll be writing about the vast, rich and myriad aspects of sex in SF; there’s so much to write about it’s kind of ridiculous. And it’s embarrassing that the state of sex in SF writing has been so dismal for so long. It always seems like every “sex” issue of the Guardian or Weekly is slapped together and often penned by people new to SF. (On the other hand, 7×7‘s recent sex issue was pretty good; the round table piece made me want to gouge my eyes out with slimline vibrators but the article on my friend Peter at Kink.com was excellent).

So, for however long it lasts, the Chronicle has a sex blogger with lots of attitude writing for them. In the meeting today the SFGate guy asked me how I thought the blogosphere will react. I told him that my blogger friends who knew were proud and stoked (I said “because it’s like I’m partycrashing the Chronicle”) and that most of all it would be really interesting, saying “because I’m quite critical about you”. He looked right at me and replied directly, “I *know*.” I smiled.

And what does it mean that they’re taking a risk with a blogger like me? I don’t know. But it’s going to be a lot of fun, for sure. As a sex writer and online sex personality, I’m not any kind of “safe” pastiche you see in mainstream media; I have chipped black nail polish, work on lethal robots for fun, have tattoos, am a fetish model, am a pro-porn pundit, a tech fetishist, and make no apologies about sex. I’m constantly in some kind of online controversy. This would be an adventure for *any* marketing department. On a personal note, I’m mulling over the fact that I grew up a dirt poor, hungry, homeless, family-less teen on San Francisco streets. I’ve worked tirelessly to spread a sex-positive, nonjudgemental message about sex around the globe, online, in iTunes and with my many books. And now I write a column for the Chronicle. Happy birthday to me.

* Clarification: I will be writing for the Chronicle empire, but for now we have not agreed that it will be old-fashioned analog RSS, meaning this is a web-only column. For the Chronicle. Which is (online) the SFGate. Even though they have a Gate/Chronicle page… uh, confused? Don’t worry, all of you will read it online anyway and I’ll have a smoothly shaved RSS feed for your reading pleasure.