A Tour of Apple 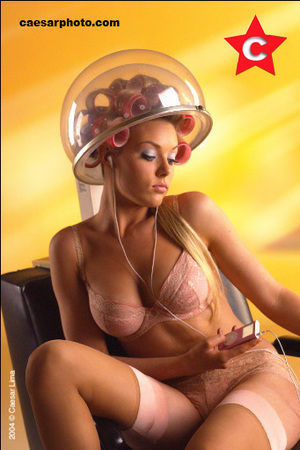 I was sitting in the huge Apple lobby, past security, in a big overstuffed chair next to my host. We’d just gotten lattes from the little Apple cafe, after a big lunch in the huge Apple cafe across the green, tree-dotted campus, and a tour of Apple Computer. Across the room were two Emmys under glass. Above me yawned a great white crescent-shaped open space with exposed white beam catwalks, going at least three stories up.

“So, what made you contact me in the first place?”
“Well, when the podcasting app launched, a lot of us started listening to your podcast. And then I found your blog; I read that you were having troubles with iTunes. And I just wanted you to know that we were listening.”

That’s how I found myself on a particualrly warm and sunny October Friday afternoon, away from Fleshbot and my computer for the first time in days. A few weeks ago I got an email with a subject line, “At Apple, we think you rock!” I thought it was spam, and had to have it read by a friend for confirmation that no, this wasn’t a prank, and yes, it really was a big-shot from Apple sounding cute and adorable and cool, and offering me a tour of the Mothership. I jumped at the chance (names and titles of Apple contacts have been changed).

So after a round of giddy emailing, Mark (not his real name) and I finally picked a time for me to make a trip to Cupertino. We had to wiggle around my insane porn blogging and book writing schedule and his super-secret product launches — our date was preceeded by “after Wednesday I’ll be human again; watch the news to see what I’ve been working on”. (It was the iPod video and new iMacG5. Hello — iMac G-fucking-5!) Mark is essentially the face of Apple; I was so nervous before my trip I had horrible insomnia and slept for only four hours.

When I got there, I found Mark to be so much like one of my friends it was unsettling; cute, cool, hilarious, down to earth — totally not the Borg. In fact, as we nochalantly processed through security and into the white-building’d complex that looks a bit like Logan’s Run or some other Star Trek utopia (where Spock gets emotions), I was surprised to see, well, a diverse range of cool looking people. And they all seemed to be smiling, like all the time, making me ask about the Soylent Green in the food. At the cafe — lunch was out first stop — it was clear that the food had at least something to do with it. Floor to ceiling windows ushered in light, greenery and sky, and outside tables were parked near lawn and tress if employees wanted fresh air with their fresh food. The selection of amazing-looking food prepared by chefs on the spot was mind-boggling; we chose sushi. “Steve had the chefs flown in from Japan,” my guide told me. There was a startling amount of vegan items on every menu (yay!), including the sushi because “Steve is a vegan.” I was all cool about it and said, “Yeah, that’s what I’m going to do, fly in my own chefs. When I’m, like…” My host actually giggled. I finished, “Steve.”

We sat and ate and chatted like crazy; I asked all about Apple and where they did the animal sacrifices (“Ever scrubbed goat’s blood out of a white iPod?”), and we talked about my writing and work, and of course, about podcasting. We did talk about lots of stuff that won’t get blogged, and the part about the goat I made up, but I walked away with a few interesting tidbits:

* My host did some investigating; ‘censorship’ of my podcast was never intentional.
* Apple is beyond cool with my podcast and those like it.
* Everyone likes having choice now when it comes to radio.
* I got lots of questions about my opinions on podcasting.

After, I got a great tour and met lots of really cool people who do stuff you see all the time; the people who are literally the voice and look of Apple. Walking across campus a *hot* boy ran up and asked if I was me; I still was. He wanted to make a point of meeting me. “I just listened to four of your podcasts in a row! I had to wait a minute before getting up, though,” he smiled. I was totally dying. They knew how to break me. Later I met the woman who wrote the famous “Do not chew” text; totally hot, funny, smart. Why were they all so cute? Just what kind of hiring policy did that Steve guy have? *My* kind, for sure.

We continued on through the buildings; one man smiled to me in the hall, “Don’t believe a word he says,” indicating my host. I met the smiling QuickTime man in the hall; “He *is* QuickTime,” I was told. He didn’t have a big blue “Q” on his chest; does he have it tattooed somewhere then, I wonder? I found out that Steve Jobs really does wear turtlenecks all the time; I’m convinced it’s to hide the gang tattoos as well. Or maybe embarrasing old Apple logo tattoos on his neck. I plied my host for hours, trying to get dirt and gossip out of him; I wanted to know about Steve’s Vaseline Slip ‘N Slide in his office, who the campus streakers were, when were the podcast beer bash key parties? Where can I get my Apple logo crotchless panties? Where did the stripper poles go in the conference rooms? Can I bring the Marching Band next time? Who’s the perviest celebrity Apple groupie? (Al Gore, I was told; he always asks about the bathroom at every event. That’s the best I could do.)

Well, I wasn’t invited to any employee human pony shows, but I had an awesome time at Apple anyway — not only did it make every crap job I’ve ever had look even crappier (they have free candy sprinkles in the cafe, dammit), but I got lots of answers to my podcasting questions and found out that Apple kinda digs me. Like, we’re friends with benefits.

Best conversation thread:
Me:”I guess my Apple fetish is pretty serious, I mean, when I order a new product from you, I immediately want to pose with it naked.”
Him: (looks thoughtful for a minute) “Well, I guess that’s okay. I mean, the logo — we just can’t have it used the wrong way.”
Me: “Oh, I know. I *did* make a photo with the logo on my butt.”
Him: “No, I mean… it’s fine. You just can’t use the logo to sell any goods or services. So you just can’t use the, uh, ass, for commercial services or profit.”
Me: “No problem there.”

I hope to visit again soon. Saturday I read in LitQuake, which was awesome, especially since I got to share the stage with one of my favorte writers and greatest inspirations, Mark Pritchard. Mark was *amazing*. Wonderfully, I also ran into Charles Gatewood afterward and made a plan to do sone fetish pics this month, yay!