Violet Blue March 18, 2017 0 pieces of BRILLIANCE put forth by a DARING and DELIGHTFUL reader 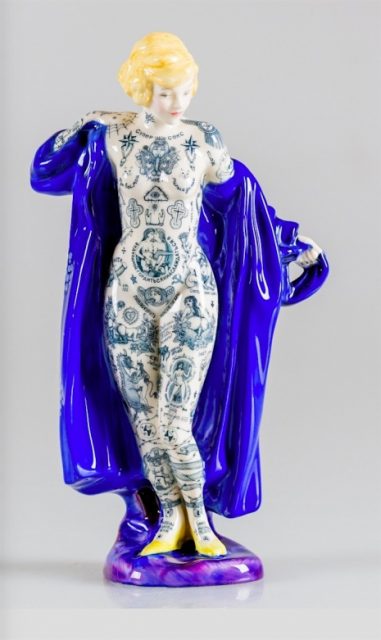 “At the time our Constitution was adopted, there were no laws in the United States against obscenity. Sexually explicit expression was widely available. It was only in the nineteenth century that religious moralists, such as Anthony Comstock, instituted laws prohibiting the distribution of “obscene” materials.”
* The Constitution’s Complex Relationship With Sex & Obscenity (TIME)

“Sergi Santos is a man with a mission: He wants to make sure robotic sex dolls that enjoy the sex as much as the humans ― or at least act like they do. The Barcelona-based engineer has just created a sex doll named “Samantha,” who is equipped with the latest advancements in artificial intelligence.”
* Engineer Creates Sex Robot That Needs To Be Romanced First (Huffington Post)

This is fantastic. “In a new survey from LGBTQ advocacy organization GLAAD, conducted by Harris Poll, those open minds are reflected in the numbers: 20% of millennials say they are something other that strictly straight and cisgender, compared to 7% of boomers. The people in that group may be be a little sexually curious about people of their own gender or may reject the notion that they have a gender in the first place.”
* Behind the TIME Cover Story: Beyond ‘He’ or ‘She’ (TIME)
See also: Get to Know the New Pronouns: They, Theirs, and Them (Advocate)

A wild ride from start to finish. pic.twitter.com/3FpxoKProO

“Other smokers report much the same — that the link between marijuana and arousal is so strong as to be problematic. But the internet is equally rife with stories of weed-related erectile dysfunction, suggesting a dual meaning for “stoner boner”: Either it’s an automatic, insistent hard-on, or it’s a frustratingly flaccid member. What could account for this contradiction?”
* What dudes won’t tell you about pot and sex (Mic)

“The museum’s website boasts that it is “probably the only museum in the world to contain a collection of phallic specimens belonging to all the various types of mammal found in a single country.” That’s a very specific niche to fill.”
* The Icelandic Phallological Museum Is a Unique Monument to the Glory of the Penis (Unicorn Booty)

“Until the early 1900s, it was common for American towns and cities to have a red-light district filled with saloons, dance halls, brothels, and other venues that offered a continuum of indulgences in intoxication and sex. San Francisco had three—the Barbary Coast was the most famous—but, starting in the 1890s and ending in the 1910s, across the country cities large and small segregated their “sporting class” into neighborhoods designated for scandalous behavior. ”
* Most American Cities Once Had Red-Light Districts (Atlas Obscura)

Note: Article defines sex as reproduction and suggests pleasure is for perverts. “Experts say that whether and how reproduction works is just one of a number of medical and biological questions related to long-duration space travel to which we need better answers and more, more-diverse data.”
* Space Sex Is Serious Business (FiveThirtyEight)

“Concerned from the beginning about labelling a stranger a sex offender, I wouldn’t publicly acknowledge the insinuation until more than a month later. I would avoid the question when asked, and fight off the temptation to acknowledge the hundreds of messages that would tie him inexorably to my case.”
* How I Hunted My Sex-Assault Suspect Online and on Mexico Streets (Daily Beast)

Don't let the next few days of swooning obits let you forget: https://t.co/eB8NXbq5XU