You Are Here: Home → 2012 → March → Do Ovulating Women Have More Sexual Fantasies?

Thomas Roche March 25, 2012 4 pieces of BRILLIANCE put forth by a DARING and DELIGHTFUL reader 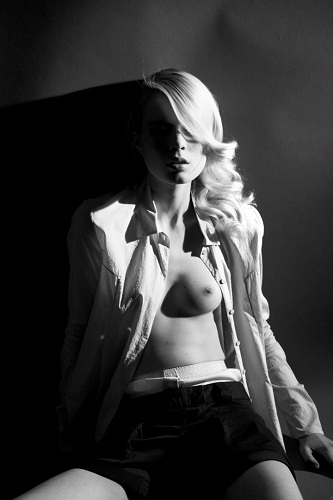 Under the quaintly condescending title Fertile Imagination: Ovulating Gals Have More Sex Fantasies, LiveScience’s Stephanie Pappas reports on a study that found that ovulating women are not only more likely to have sexual fantasies, but tend to include more men in their fantasies.

Specifically, “Women have more sexual fantasies during fertile periods of the month,” as Pappas puts it. The study was reported in the journal Archives of Sexual Behavior.

The story is getting play in such venues as The Times of India and The Daily Mail. Gather.com even went so far as to publish a story about the study under the garish headline “Strong Sexual Fantasies? Be Careful!” — turning a rather innocuous if interesting piece of science into a cautionary tale about not getting knocked up, as if having sexual fantasies was by itself dangerous. In the context of the current war against birth control and the conservative pathologizing of sexual women, headlines like that make my skin crawl.

Like many “facts” in sexual science, this study will stand as “proof” of something, by anyone who needs to trot out “proof” of what they already believe.

Unfortunately, I see a serious problem with it — the study was of 27 women. That’s right: Twenty-freakin’-seven. The results might be fascinating, but this is hardly a wholesale re-evaluation of hormones and sexual fantasy.

Don’t get me wrong — numerous other studies have suggested a link between ovulation and women’s sexual behavior. That link seems pretty clearly demonstrated at this point. But just what it means is still open (like everything) for major debate. And while I’m stoked to see an essentially sex-neutral piece about women’s sexual fantasies making headlines across the globe, it bugs me when small studies are trotted out as “proof” of something.

Here are the findings, as summarized by Pappas in LiveScience:

The new study finds that sexual fantasies increase, and lead to more arousal in women, during fertile periods. Women also reported a higher proportion of men in their fantasies during fertile times of the month.

“When it mattered most, women were fantasizing more about men,” said study author Samantha Dawson, a graduate researcher at the University of Lethbridge in Alberta, Canada.

Dawson and her colleagues focused on fantasies because such sexual daydreams aren’t dependent on the availability of sex partners or other outside forces. That means fantasies may be more representative of sexual interest than how much real-life sex a woman has, Dawson told LiveScience.

These sound like some pretty interesting findings. In particular, I find it utterly fascinating that they’ve called out the question of whether women specifically fantasize “more” about men during fertile times. Does this imply that even women whose sexual fantasies often or frequently or always lead them elsewhere may be subject to this phenomenon? Are queer women experiencing physical fertility more likely to have their fantasies gravitate toward heteronormativity? And do women fantasize about “more” men, envisioning multiple partners? There’s no real indication that the women’s fantasies were kinkier or included group sex, so I’m stuck with the boring old implication that a woman’s physical fertility might lead to heteronormative sexual fantasies. (See below — it looks to me like that aspect of the study is probably insignificant.)

The researchers paid 27 single heterosexual women, mostly college students, to keep a daily online diary of their sexual fantasies for one month. None of the women were on hormonal birth control. By counting back from the last menstrual period, the researchers targeted a 10-day window in which each woman would likely ovulate.

Is a study with 100 women better science than the study with 27 women? Not necessarily, and it doesn’t make the Archives of Sexual Behavior study a bad study. Both cohorts are within the range of typical behavioral studies — but for fuck’s sake, that’s not very many women.

Do significant findings come from small cohorts? Sure, in all fields — hell, the trial that first found Zidovudine (then aka AZT) to be an effective AIDS therapy was a damned small cohort, in a field (drug research) where large cohorts are (and should be) the standard.

And personally, I find small studies that produce easy soundbites to be sort of…creepy.

There’s ultimately nothing wrong, and certainly not anti-scientific, with doing a behavioral study with as many or as few patients as is practical, including a very small number. But what bugs the shit out of me is the reportage, and particularly the headlines, that trumpets “findings” as if they create some absolute definition of human behavior.

As with many findings in sexual science that seem intuitive, these findings are sure to get a “Yeah, of course” from some people, and a “See? Science has proved it!” from others.

Gender theory is a really complicated subject, and chopping it down to a headline or a soundbite is always, to my mind, hugely problematic.

Nonetheless, my inner sex-geek creams over this study’s details, where it’s clear the researchers have done a certain amount of impressive homework — even if I bristle at the use of “malelike” and “femalelike” to describe visual and explicit vs. nonvisual and nonexplicit fantasies:

The women in the study reported, on average, 0.77 sexual fantasies a day — much higher than earlier work, which had suggested that men fantasize about once per day and women only once a week. Those earlier studies, however, asked participants to look back over time and recall their fantasies. A day-by-day approach is likely more accurate, because it does not rely so much on memory…

…In the three days surrounding ovulation, fantasies became more frequent, reaching an average of about 1.3 per day. Women’s reports also indicated these fantasies were more arousing than fantasies during nonfertile periods.

The researchers expected to see fertile women become more “malelike” in their fantasies during fertile periods, given this increased interest in sex. Men generally report that their fantasies are more visual and explicit than female fantasies, which tend to contain more focus on emotion. But in fact, women actually became more femalelike in their fertile fantasies.

“They’re still focusing on the emotions and the feelings that they have toward this partner in the fantasies as opposed to what the partner looks like, how masculine they are and what sexual acts they’re actually engaging in,” Dawson said.

Therein, I also find the answer to my question about whether the study implies heteronormative fantasies are increased during ovulation; of the participants in the study, fantasies were populated with about 95 male characters, though about half the women had fantasies about other women. “During ovulation, however, the proportion of men went up by a percentage point or so, suggesting that fertility hormones do influence straight women’s sexual interests.” “A percentage point or two” is hardly compelling in a study of this size.

This study seems, at best, to be a tantalizing piece of a very complex puzzle. That’s okay — the history of science, like my sex life, is made up of tantalizing pieces that add up to something.

But in terms of real-world human behavior, don’t think this study “means” something. These are interesting findings, not definitions of human experience. Headlines in The Daily Mail and The Times of India notwithstanding, studies like this don’t “mean” that women “are” or “behave” a certain way.

Studies like this are part of the story — that’s all. They suggest a possible hormonal interpretation of human behavior, not some new grandiose insight into the way people have sex.

If science was easy, we’d already know everything, right?