Thomas Roche October 24, 2011 2 pieces of BRILLIANCE put forth by a DARING and DELIGHTFUL reader 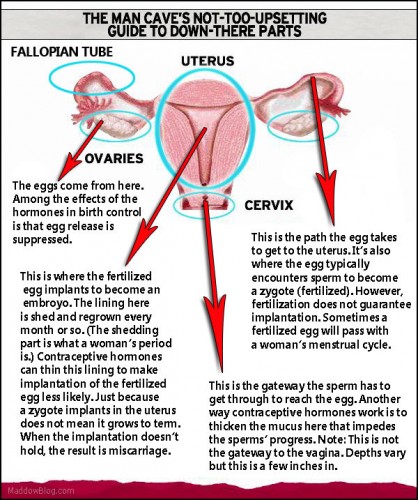 As you may know, one of the big questions in the Republican U.S. Presidential primary is just how rabidly anti-choice each candidate can be. Afraid of being labeled not-rabidly-anti-abortion-enough by Republican voters, the candidates have been struggling to one-up both each other and themselves — with anti-choice positions migrating ever further right — in some cases, dramatically.

Just how far will the candidates go to prove they’re foaming-at-the-mouth abortion-haters? Well, last week Mitt Romney, trying to erase his pro-choice past as Massachusetts Governor, took a shortcut right through biological science when an Iowa voter brought up Romney’s discussion on Mike Huckabee’s radio show of their mutual support for an amendment to the U.S. Constitution stating that life begins at conception. Did that mean, the woman asked, that Romney opposed the use of birth control?

This demonstrates that Romney had no idea what she was talking about; he has no idea how babies are made, apparently, and doesn’t realize that such an amendment would criminalize all hormonal birth control, including The Pill.

That earned him a much-blogged smackdown from Rachel Maddow, who on her show amusingly retired to the Man Cave and sipped (awkwardly) a Near Beer while giving Romney a lesson in the birds and the bees, complete with the infographic above. Here’s the clip:

Can you imagine my delight in seeing a sex-ed lesson up there on the screen, coming from a major network, complete with a giant uterus? I almost squee’d, srsly.

But unfortunately, Romney isn’t the only Republican candidate who doesn’t understand that “life begins at conception” means criminalizing all forms of hormonal birth control. That, or they’re all just avoiding it — because a radical stance like criminalizing The Pill is likely to get a voter slapdown once the extreme-right has granted the Republican medal to whichever candidate flips out the most and screams the loudest about hating abortion.

Also unfortunately, I think Rachel took it too far by implying that Romney’s criminal ignorance owes to his being a man. Sure, Romney’s idiocy might be made easier because he’s never had to worry about his lady parts. But implying that men, by nature, are likely to be idiots about fundamental laws of human existence, gets Romney off the hook just a leeeeeeetle bit for being a truly colossal idiot — and for advocating an amendment he doesn’t understand.

For the record: In order for an egg to get turned into a baby, it must leave the woman’s ovary, travel down her fallopian tube, get smacked upside the head with a sperm and then become implanted in the uterus. All forms of hormonal birth control, The Pill by far being the best-known, prevent not just conception but implantation. Therefore, the Iowa voter (whom Rachel Maddow called a “hero” — and I concur) was absolutely correct. A life-begins-at-conception amendment would prevent all forms of birth control except barrier methods and pulling out.

It’d pretty much be condoms or spray-and-pray, and I can already guess how Mitt feels about condoms. Hey, can you blame him?

Incidentally, Romney’s rabid anti-sex-ed stance led him, during the 2008 race, to attack Obama for suggesting kids be taught how to avoid and report inappropriate touching by strangers. Now, I realize that’s a little unfair; what Romney was actually trying to do was whip up crazed delirious sex panic about how Obama wants to sexualize children, not actually make life easier for child molesters. But as with so many things related to Romney and sex, the Governor managed to step on that minor land mine for the same reason Romney steps on every land mine…because he doesn’t actually seem to know anything about any topic whatsoever. His famous flip-flopping tracks back to this fundamental personality flaw — not just indecisiveness, but having no fucking idea what he’s talking about.

This is particularly Romney’s strategy on all sexual and reproductive rights issues. He’s scratched his head on numerous topics related to sex — but it’s the abortion issue on which he repeatedly demonstrates utter blockheadedness and lack of knowledge. He’s has flip-flopped on abortion numerous times, leading the extreme right to call him a “stealth pro-choice candidate.” But a Boston professor and former friend of Romney’s, Judy Dushku, was saying way back in the early 1990s that he’s anything but. To my reading, her story shows that when it comes to sex and reproduction, Romney finds flip-flopping easy because he has only the most unbelievably half-assed of thoughts, and no real knowledge whatsoever. He can change his mind at will because he doesn’t know what he’s talking about in the first place.

Dr. Dushku is an Associate Professor of Politics and Government at Boston’s Suffolk University. She’s a “Social Democrat,” a Mormon and a Feminist, and was a good friend of Romney’s, who was bishop of her Mormon congregation in Cambridge. Dushku relates the story in this interview with Susan Mazur of how Romney verbally attacked a 40-ish woman who was pregnant with her sixth child and barely into her second trimester. The woman had just learned she was at serious medical risk of dying if she continued the pregnancy. Romney aggressively tried to stop her from having an abortion despite the fact that his superiors in the Mormon Church had already given the woman special dispensation to obtain one, as medically necessary in order to save her own life. (Incidentally, the child would likely not have survived either way).

Some years later, in 1994, Romney, running for Governor of Massachusetts, came out pro-choice. Professor Dushku asked for a clarification, which she got:

Judy Dushku: I went to his office and I congratulated him on taking a pro-choice position. And his response was – Well they told me in Salt Lake City I could take this position, and in fact I probably had to in order to win in a liberal state like Massachusetts.

Judy Dushku: I asked him the same question. And he said “the Brethren” in Salt Lake City.

And I said, Mitt, it doesn’t make me happy to hear that. What you’re suggesting is that you’re not genuinely pro-choice. It’s a position of convenience.

He said – Oh no, I actually had an aunt who died of a botched abortion. So I have some positive feelings about choice, but basically I know that I have to take that position.

What I see here is not a candidate who needs a talk-to in the Man Cave, but one who shows such disregard for women’s health that he can’t even be bothered to learn how babies are made before he advocates a rewrite to the U.S. Constitution.

If Romney — somehow, against all odds — manages to obtain the Republican nomination, anti-abortion activists are likely to paint the fertilization/implantation difference as being an esoteric point of science. The fact that pregnancy requires both conception and implantation is not esoteric point, nor is it a finer point of science or medicine or feminism. It is a basic fact of human existence, no matter what your political stance. You can be as anti-abortion and pro-birth-control as you want; if you support a life-begins-at-conception amendment, you either want to criminalize all forms of hormonal birth control, or you don’t know what you’re talking about.

A TV show has limited time, so Maddow couldn’t give the answer to the oft-asked question: isn’t there some kind of hormonal birth control on the market that just interferes with ovulation, not implantation? The answer is no, because of the way hormones work. Or, at least, science and the industry haven’t gotten there yet (and may not).

Hormonal birth control, in case you don’t know, accounts for the vast majority of birth control methods used by sexually active straight women of potentially child-bearing age in the United States. A life-begins-at-conception amendment to the U.S constitution would outlaw not just all birth control pills, but the Nuva Ring, the contraceptive patch (Ortho Evra), injectable hormonal birth control like Lunelle, Cyclofem and Depo Provera, and IUDs (which in the most fundamental terms are non-hormonal, but prevent implantation). Typical-use failure rates would at least double, resulting — I guaran-goddamn-tee it — not in widespread abstinence, but in unwanted pregnancies, illegal abortions, and hugely curtailed sexual freedom for women. And those freedoms wouldn’t just be curtailed for straight and bi women, since a life-begins-at-conception amendment would outlaw abortion in all cases. A woman doesn’t have to be straight or bi to get raped.

And if it was just Romney showing this kind of ignorance, that’d be one thing. But do you want to know who else unequivocally believes life begins at conception? Every other serious Republican candidate: Michele Bachmann (“I’m 100% pro-life from conception”), Rick Perry (who specifically supports an amendment) Jon Huntsman, Tim Pawlenty (“[I’m] the most pro-life candidate in this race”) and Herman Cain (“I believe that life begins at conception, period,” and “Planned Parenthood [was] a sham to be able to kill black babies”), not to mention “Frothy” Rick Santorum. But from their public statements, none of the candidates taking the life-begins-at-conception stance seems to know that means they’re talking about outlawing The Pill.

Also staunchly anti-abortion is the darling of some self-proclaimed “sexual libertarians,” Ron Paul. However, I would hope that Dr. Paul, unlike Romney, knows what he is advocating, since as a physician he’s delivered more than 4,000 babies. Paul, incidentally, believes it’s up to the states to prohibit abortion — but according to his website he believes that purely on a procedural, Constitutional level.

The kind of ignorance shown by Romney and other Republican contenders is more fundamental than, say, advocating the invasion of a Middle Eastern country without knowing it’s got both Sunnis and Shiites. But what kind of idiot would do that?

Another problem with the life-begins-at-conception amendment is that it would become the obligation of local police to open a murder investigation not merely on every back-alley abortion (of which there would be many) — but on every single reported miscarriage. This point was amply made by Maddow, but she didn’t have time to point out that, were abortion outlawed, local cops nationwide couldn’t possibly investigate every miscarriage, because they’d be buried under an avalanche of cases, investigating the deaths of women from those back-alley abortions.

Or maybe in a Romney Nation, the death of the mother just wouldn’t seem like that big a deal?

Image from The Maddow Blog.