Thomas Roche October 9, 2011 2 pieces of BRILLIANCE put forth by a DARING and DELIGHTFUL reader 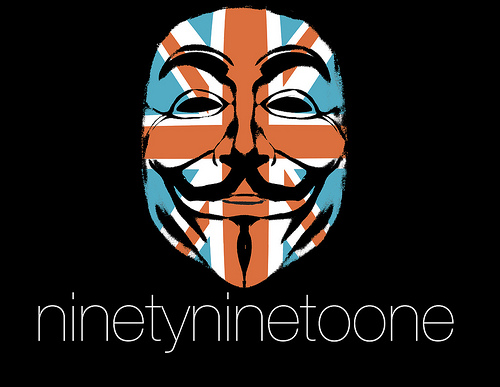 Are the Occupy Wall Street protesters really out there taking a stand for economic justice, or are they just dirty hippies who don’t want jobs?

No, they’re even worse than that!

The Mail‘s documented proof of this Rabelaisian rhapsody? Two almost identical photos of a single unidentified couple photographed under a blanket together, plus the fact that there are condoms at the protest sites. It’s almost like newspaper reporters are drawing sketchy conclusions about the sexual mores of the protestors to serve in character assassination! Imagine that.

The outrageous thing is that most of the story does not concern sex at all — it ends up in the headline (and in the two photos) as a way of fueling outrage. As with their claim of an anti-cop “witch hunt,” The Daily Mail‘s headline writers either didn’t read the whole story or didn’t care, picking whatever was outrage-friendly…in this case, sex in the streets.

Sex and drugs on tap, who says it’s not a political partaaay? Occupy Wall Street protesters make love as well as class war

It started as a gathering of furious youngsters, protesting about the supposed lack of opportunities for the average American.

But then the freeloaders came along.

As the Occupy Wall Street protest continued in full strength in Manhattan this weekend, the atmosphere in New York’s financial district became increasingly debauched…Among the banners and flags are now discarded packets of condoms, cigarettes and bottles of spirits, while naked youngsters happily get together with just sleeping bags covering their modesty.

A box of free condoms is kept in the main area where protesters are camping.

In one shocking picture, a man can be seen defecating on a police car.

That “pooping on a cop car” photograph is sure to get the LOL treatment, but it’s garden-variety city living for me, quite frankly — I’ve seen people shitting where they’re not supposed to far more times than I can count; if it’s not on my foot, I tend not to notice. But speaking of shocking pictures, here is a screencap from the first two photos in the Daily Mail piece: 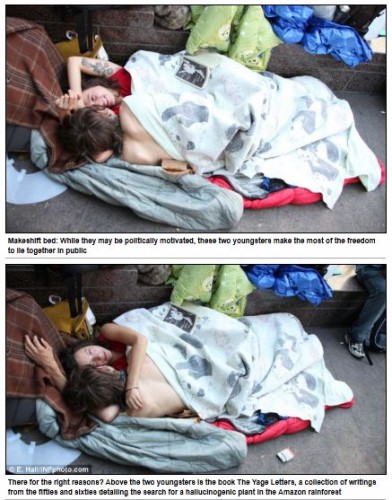 Those captions are as follows for the first and the second photos, respectively:

Makeshift bed: While they may be politically motivated, these two youngsters make the most of the freedom to lie together in public

There for the right reasons? Above the two youngsters is the book The Yage Letters, a collection of writings from the fifties and sixties detailing the search for a hallucinogenic plant in the Amazon rainforest.

The “youngsters” might be married, for all The Daily Mail knows or I know, and the Mail didn’t bother to find out, of course. They also don’t look to me like they’re having sex, and I have no idea from the photo if they’re even “naked youngsters,” so as far as I can see, they don’t have “just sleeping bags covering their modesty” at all. That is the “sex, drugs and love” brigade?

Several paragraphs down in the piece, more sex-hysteria is enlisted to bag on the protesters — which would maybe be okay, if the author had a new couple to freak out about. Sadly, this hysteria once again reiterates the same case just covered above in the photo captions!

‘Most of the kids are trust-fund babies. They don’t need to be here,’ Andre, a 40-year-old activist told the New York Post.

‘I’ve seen some making out, having sex. It doesn’t look good.’

More than 400 people reportedly converged on the tent city on Friday night, with many sleeping with each other.

One pictures shows two young people lying together with very little clothing on under a sheet.

Above them is the book The Yage Letters, a collection of writings from the fifties and sixties detailing the search for a hallucinogenic plant in the Amazon rainforest.

…Further pictures seen by MailOnline have been censored, as we deemed them too graphic to show.

Is it so shocking that two “youngsters” are sleeping together (!) and that they have a copy of The Yage Letters (!!), or is that the only actual case of sexual debauchery the reporter could actually find? No other specific, witnessed case of sleeping-bag hijinks is offered, and at no point is it established that the couple in the bag actually had sex (or even, like, finger-banged or anything).

But this poor (probably) naked hippie couple is still worth four paragraphs in a piece with sex in the headline…and they’re the only witnessed case offered to prove that this whole thing’s become a sex party.

The Daily Mail also accuses The White House of “unofficially” supporting the protesters, using the most tenuous of quotes by Vice President Biden as their only proof, before launching into a series of strongly-stated warnings that protesters might be planning on attacking police, and a series of verbal attacks by people who accuse the protesters of trying to destroy jobs for the people of New York, by forcing Wall Street to shut down (resulting in unemployed stockbrokers) as well as scaring tourists away.

None of this is shocking, since The Daily Mail is a hysterical, sensationalistic rag. But the American Right has picked up on it, as evidenced by The Free Republic‘s fresh take on events…a link to The Daily Mail‘s piece…and a whole mess of right-wingers patting themseles on the back for not being sex-mad hippies.