Thomas Roche August 27, 2011 3 pieces of BRILLIANCE put forth by a DARING and DELIGHTFUL reader 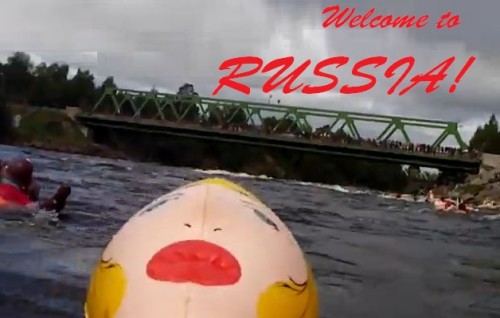 In case you’re just now catching up with us on the exciting sport of blow-up-doll swim racing, I’ll have you know that Violet’s article on the St. Petersburg Bubble Baba Challenge 2010 was one of the unquestioned high points of Tiny Nibbles’ late-August sports coverage just about a year ago. It’s almost impossible to communicate just how much excitement there was at this thing. I mean, yes, I know it’s a blow-up-doll swim race; a certain amount of “excitement” would be all but guaranteed, even if it was across the boring old Potomac. But even as blow-up-doll swim races go, last year’s Bubble Baba Challenge pushed the envelope, raising the sport to a new level the way the Ali-Frazier did to boxing, Bobby Thomson’s 1951 pennant-winning three-run, ninth-inning home run off Ralph Branca did to baseball, and “You’re no Jack Kennedy” did to competitive public spanking.

Viewed from the relative sanity of, well, almost anywhere Russian people aren’t racing blow-up dolls across Siberian rivers, the video is actually somewhat terrifying. It features a large crowd of suspiciously ebullient (possibly well-lubricated?) people chanting “Baba! Baba! Baba!” (or maybe it’s “Bubble! Bubble! Bubble!”), then propelling their inflatable sweethearts (male and female dollies and riders, both) into the water before the soundtrack suddenly kick-dances into auditory assault by the loudest and weirdest Russian-language Marc Anthony clone I’ve heard yet this week.

If you’re inclined to advocate for dolly rights, as am I , you may be slightly creeped out by the crazed competitive fanaticism involved. More importantly, I worry about just how cold those bewitching lovelies must get while being “ridden” in a fashion to which they are surely unaccustomed to and were never designed for. Anyone think to strap a wetsuit on them?

Nonetheless, a nation plagued with oligarchs, a Day After‘s worth of unaccounted-for nukes and a semi-privatized army of (alleged) polonium-wielding assassins needs to take its extreme sports where it can get ’em, right? Blow-up dolls it is!

Too bad someone in Russia doesn’t seem to be a sports fan. The most recent race, in Siberia this time, has been mysteriously cancelled at the last minute by local officials.

Who? All I know is I’d lay odds he chain-smokes Morleys, wears a Kruschev-era suit and is still trying to decide whether he really defected to Russia because he’s Fox Mulder’s father or he just fell asleep taking the train through Tunguska back in Season 3 and woke up as the police chief of a small town in southern Siberia.

Russia Today, if that’s its real name, delivers conflicting claims about just who’s responsible for the cancellation of another Russian race, this one planned for the Yenisei River, in the southwest-Siberia town of Krasnoyarsk. Here’s all Russia Today has to say on the matter:

An inflatable doll swimming race has been banned by authorities in Krasnoyarsk. Some say the event was called off by health officials who deemed the water in the Yenisei River not clean enough. Other media reports state that the decision was taken by local authorities as they considered the event inappropriate.

The competition, called Baba Gum Open Water, was set to take place for the first time in Krasnoyarsk.

Inflatable doll races have already been held in St. Petersburg and Novosibirsk. To enter, swimmers only needed to bring their own dolls and life jackets. 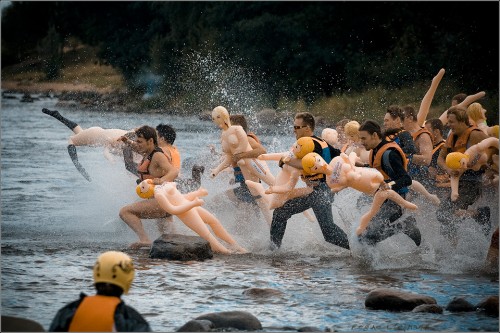 I was a little confused as to whether the Baba Gum Open Water and the Bubble Baba Challenge  are the same event, related events held annually, or proof of a robust post-Soviet environment for competition. If you’re really that interested, you can see my Techyum post on the bizarre and disturbing Moscow Cat Circus for further discussion of how the lack of a standardized transliteration from Russian to English makes it pretty screwy trying to cover Russian news without speaking the lingo. Let’s be honest, though, do you need to speak Russian when Google Translate delivers poetry to rival Pushkin?

It is about rafting on the doorstep Losevskaya on inflatable rubber women, or more simply – of swimming through the waves and breakers on the aunt of a sex shop.

But no, there’s only one blow-up doll river race in Russia. As Violet quoted the St. Petersberg Times last year:

At the contest, riders have to raft on inflatable devices down the rapids on Vuoksa River. The triumphant winner of the race was St. Petersburg “athlete” Vladislav Pavlenko on his “Vanilla Pelotki” (2 minutes 47 seconds) , followed by Dmitry Arsentiev, another local, who rode “Killer Whale” (2.51). Alexander Marasin, also of St. Petersburg and the owner of “Fearless Zina” (2.55), came third.

Competitors, male and female, make their way back to the shore after a heat. Baba translates from Russian as “peasant woman,” but is sometimes used with sexually offensive connotations. More than 450 thrill-seekers took part in the unorthodox contest, where inflatable babes-turned-boats were given titles no proper regata would ever have accepted. Take, for instance, “Floating Piggy” or “Baby-Barge.” Other bold and sassy names that provided valuable insights into their male riders’ characters and egos, have included “Unstoppable Chick,” “Cuddly Female Racoon,” “Big Tit Excess,” “Sexual Goddess,” “Roach,” “Miss Peep,” “School Girl,” “Indefatiguable” and “Luba For A Price.”

I couldn’t find any more information on the cancellation, which seems to indicate yet another government cover-up. Honestly, this whole thing stinks to high heaven….and it smells like conspiracy.

Given the political environment in today’s Russia,could there be a war on for control of Russia’s blow-up doll swim race?

Are Russian mobs be battling for control of this lucrative racket? Could there be payoffs involved?

Could St. Petersburg be sending Krasnoyarsk a “message from the North”?

As with everything related to the dangerous world of competitive blow-up-doll swim racing, the truth is “out there.”

That’s why, with the help of a “Doktor Dolly” I found through a banner ad on the Bimbo Builder thread on Alt.Sex.Stories, your intrepid Tiny Nibbles correspondent will be going undercover as a well-endowed Slavic novelty.

Just a brief period of high-tech “modification” in Comrade Doktor’s secret lab hidden beneath the permafrost of the Byrranga Mountains, and yours truly will be ready for bar-coding, boxing, shipment to Krasnoyarsk and the start of a new life. As an “investigative reporter,” of course. My next dispatch may be from the waters of the Volga…