Thomas Roche June 6, 2011 12 pieces of BRILLIANCE put forth by a DARING and DELIGHTFUL reader 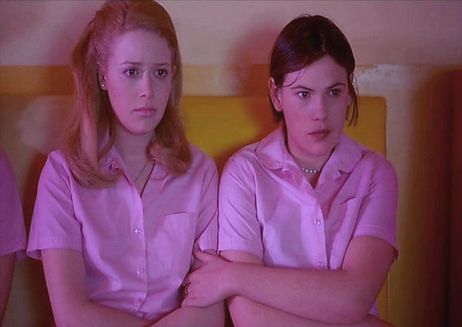 In a post that’s (hopefully) due to hit the mainstream press and cause public outrage, Reddit user Pixel8 posted the horrifying first-person story of a teenager named Xandir who was forcibly abducted from her home, publicly restrained, and transported to a program for “troubled teens” where she and others were psychologically and physically threatened and tortured as “treatment” — solely, or at the very least primarily, because she is gay.

The “school” in question amounts, by the teen’s account, to an abusive re-education facility or, if you will, a brainwashing program. It is Cross Creek in Utah, affiliated with the World Wide Association of Specialty Programs (WWASP), a Utah-based group that serves as an umbrella organization for “programs for troubled teens.” Though WWASP itself is not-for-profit, many if not most of the individual programs are for-profit, as are the affiliated services that provide a) “escorts” (i.e., men in black) to take the teens to and from the facilities, and b) the for-profit company that process “tuition” payments — not to mention c) the organization’s private, for-profit marketing firm. According to an article in Reason, many of the individual programs are owned through various partnerships by officials of WWASP and their close relatives. There have been a number of really serious questions asked about just how much influence WWASP’s officials and the owners of the individual programs exercise with lawmakers.

But back to Xandir, who was grabbed from her home, again, apparently for the crime of being attracted to women and under eighteen…and therefore without civil rights. The post is an absolute must-read for anyone concerned about the rights of any youth – especially lesbian, gay, bisexual, queer, questioning or transgender. It’s a reminder that adolescents in the U.S. have, in practical terms, exactly and only the human rights their parents and the authorities decide they’re entitled to.

Xandir describes being abducted from her home, without explanation, by strangers:

On May 10th of 2007 at around 2:30 in the morning two strangers barged into my bedroom. I started screaming and crying, as in my mind I was sure that these two strangers had broken into my house and were going to abduct me, rape me, kill me, or in some way harm me. They immediately told me that if I did not shut up that they would handcuff me. I was not being in any way violent or threatening…

…They started going through my closet digging out clothes as I was only in a night gown. They still had not explained what was going on. I asked, frightened, what the wanted from me, trying to see if I could in some way appease them and get them to leave. They then explained that they were going to take me to a school. It took me a second to understand what they meant by this, as this was an extremely bizarre way to introduce a child to a new school. It then occurred to me that this was what my mother had arranged for my brother several years ago when she had him shipped away to Cross Creek. The two strangers were from Teen Escort Service, a for-profit company that transports teenagers, usually by force, to WWASP (World Wide Association of Specialty Programs) facilities.

Xandir was restrained for the trip with a leather strap around her chest, and, from what I can gather, was essentially led around on her belt-cum-leash through the airport to get her flight to the new “school.”

“It was so humiliating to be led around like a fucking dog around the airport. It was also extremely uncomfortable to have this strange older male putting his hand so close to my breast.”

Things get even more horrifying:

I had never spoken to R., the program director, before and my first experience with him was horrible. He asked me why I was there, and I told him all of the things I’d done that I could think of that could possibly be perceived as “bad”. He yelled at me, saying that I was lying and that I didn’t love or care about my parents. I was shocked and confused, unsure of what I had done to deserve this treatment from someone I had just met. To this day, the only thing I can think of that I possibly could have left out was my attraction to other females. In one of the Parent-Child seminars we were made to attend, my mother shared with me that this was one of the biggest “issues” that caused her to send me to Cross Creek. Not the drugs, not the sex (she told me she had no knowledge of me being sexually active prior to being forced to disclose it to her), not the issues with school, but just the fact that there was a possibility that one day I might fall in love with a female…

…Shortly after I arrived, my “HOPE buddy” (the student they assign to “mentor” you and teach you the rules in your first few weeks) started asking me about my past, why I was there, and what issues I needed to work on. I talked briefly about my experimentation with soft drugs, my issues with depression (something I’m pretty sure most teenagers experience), and the abusive relationship I had been in with my first girlfriend. As soon as I said the words “girl” and “relationship” in the same sentence she said “STOP! STOP! We can’t talk about that.”

The story gets still more disturbing from there. The program of “motivational” lectures and the like are mind-bending, and Xandir feels she succumbed quite thoroughly to what can only be called brainwashing. She also displayed physical symptoms of extreme stress that were clearly, by her account, ignored by the “caretakers” in the program.

If you’re not familiar with the private, for-profit that abducts adolescents who have been extrajudicially assigned the label of “troubled teen” by their parents, the story may sound outlandish and borderline impossible. The phenomenal incompetence and bigotry of the “professionals” running this program makes it all sound so potentially unlikely to the uninitiated, in fact, that in the end, Xandir feels obliged to add this disclaimer:

Even if you choose not to believe me or anything that I have written, there are piles of evidence to support the idea that there is mistreatment at Cross Creek and other WWASP affiliated facilities. A little bit of research will reveal that this lawsuit is not the first that WWASP or Cross Creek has faced.

(…)I’d also like to mention how many times I saw staff and administration, tackle and restrain children when it was completely unnecessary. So many times I saw kids simply refuse to go to gym class or get out of bed and as punishment they were violently tackled, restrained in a painful position, and taken to a small isolation room (…) If you look on the website for the Coalition Against Institutionalized Child Abuse, you can see a long list of deaths that have occurred in “behavioral modification” facilities not unlike Cross Creek as a result of tackling and restraint.

As horrible as Xandir’s individual story is, the really upsetting thing is that it’s no different than what’s been done to “troubled teenagers” for decades — including teens who committed the crime of differing in sexual orientation, politics or morality from their parents.

I remember hearing similar stories from a couple of people I knew in the punk scene in the early ’90s who claimed to be veterans of such “reeducation” programs. They were not the criminals, vagabonds, or drug fiends of the community. There were plenty of those in my circle, the vast majority of them highly productive-to-society petty criminals, vagabonds and drug fiends in the long term. But the ones who had been “re-educated” that I knew had simply stumbled into the misfortune of having authoritarian parents who didn’t like their kids hanging out with people who had green mohawks.

This is a problem that is happening now. I’ve also been personally aware of at least one case in recent years where an abduction like this happened. The parent involved was not a religious zealot by any stretch of the imagination, and in fact was not a member of any Judeo-Christian religion. Though LGBTQ youth are often singled out for such programs, their victims can be any teenager who has engaged in a pattern of what his or her parents decide is troublesome behavior (or gender nonconformity).

What’s more, I know for a fact that in some cases parents are talked into sending their kids to these exact same privatized (and incredibly expensive) programs by public school officials. In some cases, public funds pay for these programs, and tuition can run into the several tens of thousands a month.

Of all the horrible things that happen to young people in this country, these privatized, for-profit programs are among the worst, and when it happens to lesbian, gay, bisexual and trans youth just for being queer, it underscores, to me, the fact that sexual freedom in this country exists within a very narrow definition.

Now someone, please: tell me “it gets better.”

Image from the film “But I’m A Cheerleader.”