Violet Blue October 6, 2010 22 pieces of BRILLIANCE put forth by a DARING and DELIGHTFUL reader 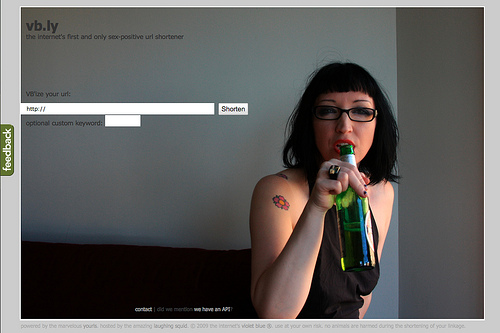 This is also posted on Techyum if you want a work-safe link. Also read this chilling post about what happened with vb.ly in The .ly domain space to be considered unsafe (benmetcalfe.com).

It’s official: the Libyan government has seized vb.ly. This was done with no warning. Despite the fact that vb.ly was a one-page link-shortening service, Nic.ly (the registry for .ly domain reseller registrar Libyan Spider) informed us that the content of our website was offensive, obscene and illegal according to Libyan Islamic Sharia Law. Not the domain, but the content of the website – no matter where the domain was hosted.

The photograph of me (above) with my bare arms, holding a bottle, and the words “sex-positive” were cited as obscene, offensive and illegal. We were also told that we were “promoting an illegal activity” with our link shortener.

We had the domain for a year and had just paid to renew the domain for another year. For two weeks the processor Nic.ly had told us in vague terms that vb.ly was in violation of Nic.ly and Libyan Spider’s terms. However, we could not find anywhere in the terms on both sites, where we were in violation, which apply to the name of the domain. We were also told we had been warned to change the domain content of face deletion, but no proof was provided that they had attempted to contact us. Had we known, we would have responded immediately.

However, no one knew that the Libyan government would begin seizing domains based on application of Islamic law to website content (let alone potential use of an online tool, such as a link shortener). For this reason, all .ly domains, and the businesses built on them internationally, should be on high alert.

* We ran vb.ly for over a year (launched August 2009).
* We renewed but it does not appear we will get our money back.
* We were told at first we were in violation of terms, but the terms did not exist.
* It has been revealed that vb.ly’s violations were according to Libyan Islamic Sharia Law.
* While this has not been applied to .ly domains in the past, it is now.
* Vb.ly never violated terms stated on either the Nic.ly or Libyan Spider website.
* The domain never hosted or displayed adult content, or stated “adult” anywhere.
* Thevb.ly website said, “The Internet’s first and only sex-positive URL shortener.”
* On its launch, cNet responded saying “Bravo!”

When we could finally get a response to our tickets, Libyan Spider’s Jumana Benlateef wrote back stating, “Using a generic term to promote an illegal activity doesn’t make your domain name legal to exist under NIC.LY’s regulations.” She told us the regulations could be found here: http://nic.ly/regulations.php.

We read and re-read the regulation, and asked Jumana Benlateef to specifically state which terms we were in violation of. She did not, and told us to contact Mr. Alaa ElSharif from NIC.LY directly.

We did. Mr. Alaa ElSharif told us that Nic.ly had told Libyan Spider to contact us, and because of that he “disagreed” that the deletion was abrupt. He wrote,

“(…) our request related to you through our reseller was quite simple: the removal of any and all offensive imagery on the site and of the statement boasting that its ‘the only adult friendly URL shortener on the internet’, an honor our Registry has no interest in obtaining nor wants under its banner.

The issue of offensive imagery is quite subjective, as what I may deem as offensive you might not, but I think you’ll agree that a picture of a scandidly clad lady with some bottle in her hand isn’t exactly what most would consider decent or family friendly at the least.

I cannot confirm whether or not Libyan Spider contacted you on time, but being our Resellers they most definitely have credibility with us. According to their narrative they tried contacting you numerous times with no avail, leaving you a voice message on your answering machine in the end. Not receiving their warnings doesn’t by any means relieve you of the consequences of not heeding to them.

While letters ‘vb’ are quite generic and bear no offensive meaning in themselves, they’re being used as a domain name for an openly admitted ‘adult friendly URL shortener’. Now, had your domain merely been a URL shortener for general uses similar to bit.ly (as you claim) there would have been no problem with it. It is when you promote your site being solely for adult uses, or even state that you are ‘adult friendly’ to promote it that we as a Libyan Registry have an issue.

While our ccTLD is open for registrations from all around the World, and we pride ourselves on being the online destination for many well known websites internationally, our rules and regulations, and our Country’s Law and Morality do not allow any kind of pornography or its promotion.

If you return to our list of rules and regulations you will find that 8.4.2 states that we as a Registry reserve the right to suspend or delete a domain name if “The Applicant/Registrant is in violation of any of the terms and conditions in this Regulation.”

Moving up the Regulations list we find clause 3.5 clearly states that: “The Applicant certifies that, to the best of his/her knowledge the domain name is not being registered for any activities/purpose not permitted under Libyan law.”

Pornography and adult material aren’t allowed under Libyan Law, therefore we removed the domain, and before doing so we warned you thru our Resellers and gave you a relatively long grace period to rectify your situation. Being that you didn’t receive/ ignored our warnings is your problem not ours

When we have an out cry from within our Community and even from places as remote as Morocco (a sister Muslim and Arab state) asking us how such a ‘scandalous’ domain is allowed to exist under our National extension we are left with no option but to apply the rules. I invite you to conduct a simple search to see if domains such as (what was) yours are allowed to exist under the ccTLD of other Arab and Muslim Countries.

They don’t. Why should Libya be the exception?

Based upon the above, the decision to remove vb.ly from our registry is irreversible and final. I’m sorry that we couldn’t reach a more pleasant conclusion, but this was the result of your ignoring our rules and regulations and failing to communicate with us through our official channels.

We intended vb.ly to be a link shortener that celebrated tolerance and provided an alternative to other link shortening services whose terms were vague, and possibly loosely interpreted and thus subject to change, around human sexuality. It was made to be a service where you CAN put NSFW links, but not *exclusively* for non-worksafe links. It was simply a service which openly stated that it won’t discriminate against you (by filtering or removing your links) if you do. Revolutionary, I know. We were careful to monitor link creation closely for spam and other unethical practices, and were swift to enforce deletion and blacklist of those who abused the service. All we wanted to provide was a link shortener that was nonjudgmental and secure in a landscape where all genders and orientations are faced with discrimination, and when the subject of sex is mentioned, often face losing accounts, along with censorship and unwarranted deletion.

We failed the users of vb.ly. Had we known that after a year, strict Libyan Islamic law would begin to be applied to the content of our one-page link shortening website, we would have built the website using a different extension and in a more secure country. Questions about bit.ly and Libyan Sharia law had been asked, but now it appears the answers have changed. “All it does is shorten URLs” does not matter.

It should be noted that all vb.ly links still exist but do not function at this time. We have the database intact, and will restore your shortened URLs momentarily with a suitable domain.

Libyan Spider has claimed a domain that had a good year of traffic and recognition. Interestingly, on June 1, Libyan Spider/Nic.ly issued a statement that it would no longer sell domains less than four letters to non-Libyans, though those of us who had registered domains would be allowed to continue our renewals (and we renewed vb.ly after this change went into effect). I’d also like to point out that I’ve since discovered that alcohol, women showing bare arms (uncovered) and images of Christmas are also prohibited under Libyan law. Good thing I wasn’t wearing a Santa hat in the photo, eh?

UPDATE 10.08.10: Nic.ly/Libyan Spider has responded with this statement. They did not try to contact us. I find it impossible that they could contact me for renewal, we passed communication about the renewal (same contact data) and they processed my payment a month before and yet *somehow* I did not receive their alleged contact attempts a month later. They did not provide evidence of alleged attempted contact when we requested it.

And finally: why would I ignore warnings or any communication which might jeopardize my domain — and break over 500,000 links — a significant number of which were my own!? Not to mention the cost to the hundreds of thousands of people I let down by having the domain jacked by Nic.ly. That is reputation cost, and I would have never ignored — or as they suggest, avoid — such communication. This domain cost me money, time, and the trust of my community. (I made no money from vb.ly.) I’m offended at their suggestion that we were trying to “get away” with anything. No, I call shenanigans here.

To add to the distressing suggestions about the way Nic.ly is doing business seen in their statement (art.ly you’re in their crosshairs), read Our response to NIC.ly’s statement on the vb.ly domain deletion.