Violet Blue September 22, 2009 19 pieces of BRILLIANCE put forth by a DARING and DELIGHTFUL reader Why do a news roundup on my birthday? Because it’s what I love. And, there are enough sex news items every week to make not just a column but a show or even a daily post, as far as I can find. It’s interesting stuff, and poeple want to know. And — I find it. I have some skills…

* Oh yes, I’m an American. And when Obama was elected I was proud for the first time. (Though I’ve alsways and will remain a proud San Francisco girl.) Yet when this shit happens, I feel the deepest shame: Sen. Tom Coburn’s (Republican-Okla.) Chief of Staff stated: “All pornography is homosexual pornography, because all pornography turns your sexual drive inwards.” Huh? (washingtonindependent.com, via Ms. Maggie)

* Someday I will live in a world where it’s just a given that my gender has sex because it gets us off. But, dammit, I was born before my time. FOX News tells us (with a minor dissenting voice from Fullbright) that a survey of 1006 women speaks for all women and the females, they have the sex for sport and to put one over on youse guys and stuff. Or some bullshit like that. I hate you FOX for perpetuating these assenine princess myths about sex. Fuck you. But your list is great to read on the toilet. “FOXSexpert: The Real Reason Women Have Sex” (foxnews.com)

* w3rd!!! Good news, great news! Book Soup, a reputable 30-year-old LA book retailer is now carrying Eon McKai‘s Vivid Alt titles because they “take modern social themes and weaves them into sensuality charged tales“. This is a win for those of us who don’t have FOX news sex. Which I think is, like, the rest of us. (msnbc.msn, and FYI: MSN still has ass for a website)

* I wrote a very controversial piece for the SF Chron about sex offender laws (and how they are ineffective and punish the wrong people via harnessing collective hysteria), to have the next big news item be about the horrifying discovery of Phillip Garrido kidnapping a young girl (and possibly others) and.. you know the sickening rest. I’ve followed the case and news items closely. Some right-wing douchebags have compared my piece to endorsing Garrido. I just don’t know what to say to these awful people. Except that reading this Wall Street Journal piece Sex-Registry Flaws Stand Out about how our broken sex offender laws contributed to Garrido going undetected. (sfist.com, online.wsj.com)

* I don’t need to say anything: i09 tells us, “The kitten with a whip lingerie line Agent Provocateur is coming out with a comics-inspired unmentionables line. See their Doctor Who-esque underwear trailer and army of thonged supers. It’s interesting – especially Hornette’s confusing nunchuck lightsabers.” (io9.com)

* Neuroscience is finally looking at sex. No, really. Or at least as a way to study *part* of the brain, though I doubt they’re seeing just how much it informs our experience: Splintered sexuality as a window on the brain is very interesting yet I’m sad to see this area of investigation is still in its infancy. (mindhacks.com)

* Every good goth knows who Gunther von Hagens is. He’s the guy who made plastinated bodies into art shows (and Scandanavian horror movies). Looks like he’s going to create an entire exhibit showing plastinated cadavers in sexual poses. (He already has two copulating cadavers in his current show.) German officials have been humorless to say the least and thought his ‘cycle of life’ was “revolting!” So much for Euro permissiveness — pardon us Americans for thinking some EU countries are more mature than we are. (scienceblogs.com)

* It looks like Eros LLC is back with another lawsuit about sex beds (and sex coffins) in Second Life. And cuddle rugs. What’s a cuddle rug, anyway? Linden Lab Targeted in Second Life Sex-Code Lawsuit (wired.com)

* Advertising your online game: a lesson in “sex sells” ? — or making you look like an ass. It’s ass. You will LOVE the post How Not to Advertise on the Internet (codinghorror.com, thanks Z!)

Here’s me, as my own birthday cake wishing you were here (pic from last weekend): 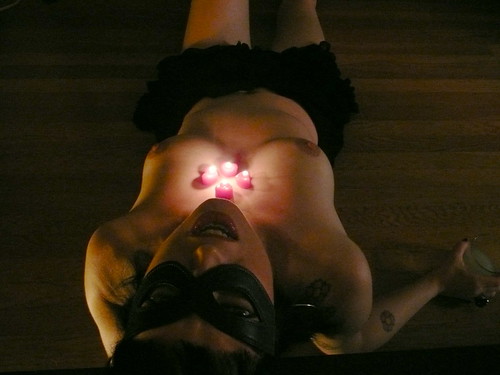