Violet Blue July 23, 2009 1 piece of BRILLIANCE put forth by a DARING and DELIGHTFUL reader 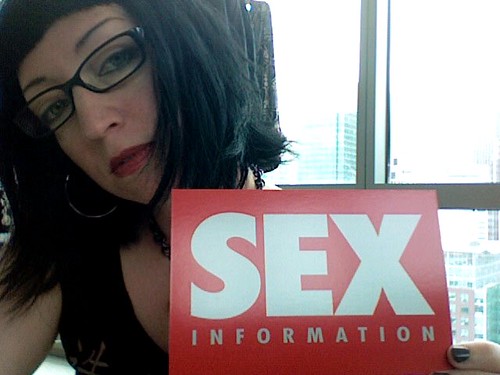 Dovetailing off the discussion and argument off my very passionate post about the UK’s new sex ed pamphlet for teens in this post, I continued the thought process and argument through into my column. I formalized the argument and drew out concrete ideas for how sex ed can finally be effective, healthy and productive for teens in America across our varied social strata. But that sounds dry — Teens Love Sex is actually fun. Bristol Palin does not escape, yet again. Here’s a snip from the middle:

So much for the “hands off” approach. Talk about not understanding human social dynamics, let alone teen social dynamics. In my opinion, the conservative backlash just shows me that America’s anti-sex, anti-pleasure pundits are the ones who will enact their greatest fears and lose their f—ing minds should they give in to a single moment of pleasure. They don’t have the decision-making skills to know what’s appropriate and safe, and what’s not — because they’ve denied this type of understanding and exploration of sex’s pleasure principles from everyone else for so long.

We’re 200+ days into Obama’s shift, and while we’re waiting for all that change, the current state of sex ed in America is a flattened, empty, deserted war zone of sexlessness — at least Obama did eliminate Federal abstinence education program funding from the 2010 budget. (…read more, sfgate.com)