You Are Here: Home → 2008 → December → Sex and sneezing: Condition defined by British researchers

Violet Blue December 19, 2008 0 pieces of BRILLIANCE put forth by a DARING and DELIGHTFUL reader 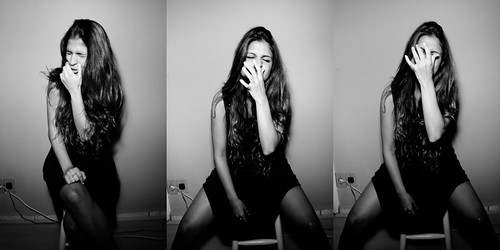 I’ve long known about sneezing fetishism — those who collect and eroticize sneezing images, or those who get off watching a sneeze. For some, it’s the moment right before the sneeze that does it for them.

But we’re not talking about them. (Though this article is interesting.)

We’ve been told that the muscles used during a sneeze are some of the same ones used during orgasm, but it turns out that there may be more of a link between sex, orgasm and sneezing than conventional wisdom had us believe. British researchers have uncovered a connection variation in the nervous system that sends some people into uncontrollable bouts of sneezing after orgasm, or even simply thinking about sex. Yeah, next time I tell you my allergies are acting up… You know. I’m just thinking about my next blog post. Snip:

Thinking about sex or experiencing an orgasm sends some people into an uncontrolled bout of sneezing, and according to two researchers the problem may be more common than the medical profession had realised.

The doctors who investigated the link are not yet sure why sex and sneezing are linked in some people, but they suspect it is due to a faulty connection in the autonomic nervous system – the system that exercises unconscious control of, among other things, heart rate, digestion and pupil dilation.

Dr Harold Maxwell, a consultant psychiatrist at West Middlesex University Hospital in London, was first alerted to the condition when a middle-aged male patient described uncontrollable fits of sneezing whenever he thought about sex. When Maxwell and his colleague Mahmood Bhutta, a surgeon at Wexham Park Hospital near Slough set out to investigate how common the problem is they could find only one similar case in the medical literature – a case reported in 1972 of a 69-year-old man who suffered severe sneezing after orgasm. “It may also be seen as embarrassing and people perhaps don’t want to talk about it,” said Bhutta. (…read more, guardian.co.uk)