Violet Blue June 30, 2008 17 pieces of BRILLIANCE put forth by a DARING and DELIGHTFUL reader 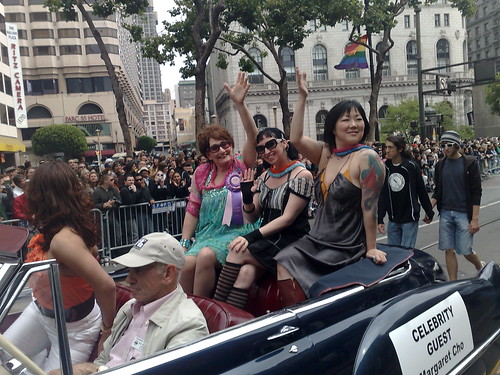 In the SF Pride Parade 2008: my mom Theresa Sparks, myself, and my soon-to-be-adopted sister, Margaret Cho. Photo by Jonathan Moore, the adorable straight boy who handed out marriage equality stickers all day Pride sunday.

* Shoutout to the SFBG! Pics: Some famous faces of Pride.

It was 8:30 am sunday morning and I was downtown at the Embarcadero Hyatt Regency for the annual Alice B. Toklas LGBT Democratic Club breakfast. It was my second one, and it’s a crazy who’s-who of powerful LGBT friendly California politicians, and this being the big year for gay marriage, it was the year to really show up and *represent*. It’s a very important thing, this breakfast. Last year Elizabeth Edwards gave a stirring speech and I was introduced to everyone from Kamala Harris to Carole Migden. This year I know more people and that made it more fun; Tom Ammiano, Mikayla Connell, and even Mark Leno managed to race by the table and give me a squeeze and a hello. That I’ve come to know these incredible people amazes me to no end. I thank my lucky stars for being adopted by Theresa Sparks and Auntie Cecila.

This year we had speeches by Jerry Brown (who did indeed refer to himself as ‘Governor Moonbeam’), Gavin Newsom (as we did last year), and Ron Dellums — the first African American Congressman and current Mayor of Oakland. Hilary Clinton sent a note to be read by a delegate, as did Barack Obama. Hilary’s letter was (in my opinion) very form-like, and did not *even mention* gay marriage. Obama’s letter opened with a huge congratulations to the LGBT democratic club, and was almost entirely about marriage equality, and the wish to make it a reality on a federal level. They are very different letters. I trust politicians about as far as they can be tossed by toddlers, but I think we’re only going to get somewhere with human rights when politicians are finally honest about who the hell they’re talking to. Obama’s off to a good start.

But it was Dellums who made it all make sense. One of the first things he said is still ringing in my head today. “Be sure that every day you wake up with a fire that burns in your belly to make a significant change in the world about something that is bigger than you.” That’s it, I thought while I sat at the table, that’s it. That’s the kind of person I aspire to be. That’s the kind of people I should be around. People who seek real change for that thing that’s bigger than them — no wonder people who I’ve known whose lives are driven by money or fame or petty politics all wind up as former friends. It’s starting to make sense. Now those scars, they can finally mean something.

It’s the kind of speech where you can tell that this man, when he says he saw Martin Luther King speak, you know you’re as close as a person can be to that kind of truth and sacrifice, a fire and brimstone coming from the heart about equality and loving one another that transcends politics yet is all about political action. And like Dellums described his experience seeing King speak, I felt the same way — that for a powerful minute, there was no one he was talking to but me. And to feel King in the LGBT Democratic Club’s space — that we were winning.

His final point was that every citizen deserves the right to be with whom they choose, and to work. And everyone in our nation deserves the rights to do both in equality. I don’t know if you read the California gay marriage ruling/opinion — probably not, as it is a sprawling document (.pdf) — but it came down to something that resounds here like a clanging church bell. The court opined that any law discriminating against sexual orientation was the same as discrimination against race (and religion and gender). And that years ago in California (like 1948), it was shocking and controversial to allow interracial marriage, but now we think it’s a right and an non-issue. Just as it is shocking and controversial now with gay marriage, and thus marriage equality. Dellums tells us, because he’s been here before, people — that we won. And that after breakfast when we walked out the door to all march proudly in the parade with our family and lovers and friends at our sides and in our hearts, we were not marching in protest. We were, that day, yesterday, marching in victory. That we could be happy, and joyful and together because we won. And we did. 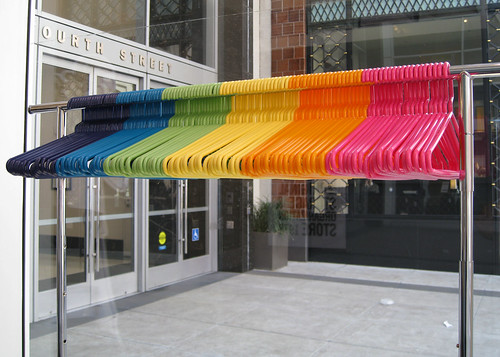 I sat there in the middle of the room crying like a baby, and kept crying while we all stood to applaud Dellums in a standing ovation. Then, Gavin got up and effectively kicked me while I was down, giving a speech about how love is the most important thing in the world and the most powerful. That it is the one thing that can’t be bought, or forced on anyone. And to him, that’s what marriage equality meant. That we, as San Franciscans and Californians, were going to keep doing everything we can — and have been doing all along — to continue spreading love around the nation.

Out the door, on the way to the parade it was freezing in the fog, and holding Jonathan’s hand with our matching gothy outfits and our marriage equality stickers on our sweaters, we trailed behind my stunning sister Xtina. She’d danced her ass off friday night (hey, a girl’s still gotta work) at Asia SF and later Diva’s during the insanity of the Margaret Cho tranny bar tour (on VH1 this Fall, no kidding). Xtina and I texted each other all weekend about how much we loved each other and are fiercely proud to be sisters. Sunday, we shared a teary call where she told me no matter what, she’d always have my back because she was my sister. Just say the word, she said. I said the same, and it would never matter what anyone said against us.

I didn’t expect to ride in the car. At the last minute I was ordered to get in by Mama Sparks — sitting between Margaret and Theresa, with sexy Xtina in the front seat. Everyone looked gorgeous, and strangely, the whole ride was over in what seemed like minutes. Yelling, waving, smiling so much our faces actually ached. And here’s the thing: Margaret was there because she *wanted to be there*. She was, in fact, absolutely obviously thrilled to be there and to have an opportunity do anything to participate and meet people and have fun. Because Margaret really, really believes in Pride and everything it stands for, in her heart — I know this because I saw it on her face and in every action, and yes, also because she is now my friend and I can hear it in her voice when she talks about it. She stopped for every photo, she talked to every stranger, she took every chance to get up and make jokes and make people laugh and *feel beautiful*. She was a pale and tattooed hero. The crowd loved her, and she gave it back times a thousand. She wasn’t a Celebrity Grand Marshall or anything (and in fact, the other celeb grand marshalls behaved ungratefully, flakily and really like confused and aging pop stars — saying they were too tired or “sick” to do more than show up and leave). Margaret Cho was there because she knows it’s an honor, and she shines brighter than the rest. Period. 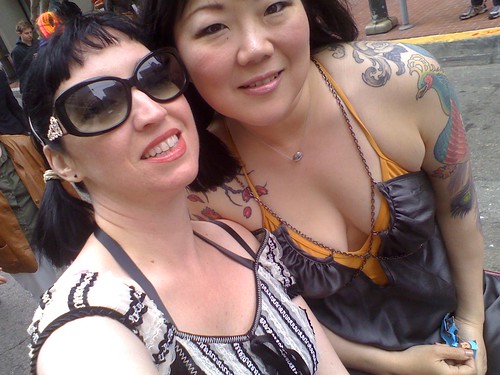 She is lobbying for adoption to have Theresa as a mom, too. I have zero in the biological family department, but I think I’m inheriting a family that’s, well, made of things bigger than me. And despite turning some of my fantasies into incest scenarios, that’s exactly what I want. That family, you see, *is* me. Take away my painful past, the people who have hurt me over the last year and a half, the stalkers, the death threats, the nonfriends, people disappearing me from my own online histories, take it all away and you have me. I can do it alone, but I don’t have to anymore. I think there might be at least 1.1 million others just like me (that was the SF Pride attendance estimate this year). And I’m proud of who we are. I don’t know if this makes any sense to you, but I’m feeling pretty solid about it.

After the parade, Jonathan and I unintentionally crashed the staff party in Mayor Newsom’s office — graciously, they let us hang out *on the motherfucking mayor’s balcony overlooking the city*! I lost my card reader so until I can get the fabulous photos off my camera from this weekend, I’ve got this Flickr photoset, and these videos:

* In the car during the parade!
* Crashing Mayor Newsom’s staff party, on the balcony.
* Very acrobatic gay cheerleaders practicing a routine (from the balcony).