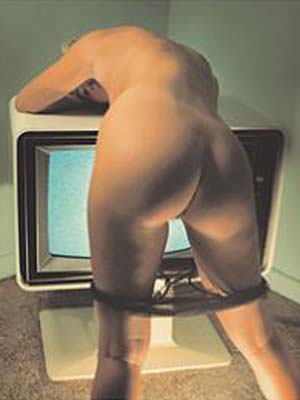 First, I know quite a few readers follow my sex blogging at Fleshbot, and this week (8/22-8/26) I’ve been released from the fleshy dungeon so I can work on a book and generally make trouble; you’ll see a lot more of me around here as I’ll be tidying and updating Tiny Nibbles (read: procrastinating my book deadline). And now that I finally have my voice back after my awful flu, I’ll be podcasting again, yay!

When I asked the editor if he liked one movie in particular he wrote: “Well….you tell me. I thought it was hot, yes, but…I dunno. In some ways I think it is brilliant, in some ways it makes me feel icky to be a man … I guess what I feel weird about is that I feel like I’m either a) talking about a phenomenon that everyone else in porn has already discounted, which will make me look stupid, or b) talking about the elephant in the middle of the room, which will make me look stupid and get me completely blacklisted.”

His reply was, “…..and then when I went and had to write something about them, I realized how completely I could never put my name on something that says, basically “huh, fuckin’ bitch gets abused, fuckin’ hot, huh huh, I love fuckin’ abuse, huh huh,” which is what I would have to say if I were to praise them.

Anyway, thank you for helping me spew out some of my thoughts about this. It is good to hear that I’m not completely off base. … But Christ…I just can’t believe that people who write about the industry could be so dim as to treat something like as “hot” and “edgy” and not even begin to discuss what it reflects for, y’know, male-female relations and all that.”