This might get me kicked off Tribe, so I’ll reproduce the text on my blog :)

Tribe has not been hit with the 2257 brick. Tribe is *voluntarily* applying the 2257 laws to itself — its members, the tribes and the very architecture of Tribe itself. 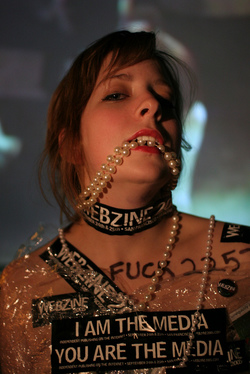 Two weeks ago Tribe asked me for a phone meeting; I didn’t know what it was about but I figured it had something to do with Tribe’s mature content. They explained to me in a half-hour conference call that they were gearing up to change Tribe’s architecture (entry pages, etc) to conform to updated 2257 laws, which are record keeping requirements. The federal law now requires website owners to keep *physical* records documenting, among other things, that “a book, magazine, periodical, film, videotape, digitally- or computer-manipulated image, digital image, picture, or other matter that contains a visual depiction of an actual human being engaged in actual sexually explicit conduct” is over the age of 18. Visual depictions *after* 1990, mind you.

Link to text of law.

“Sexually explicit conduct” and “obscene” are the key words bandied about by means of definition of what falls into the law. Keeping records, according to this law, means that for each image the webmaster must have copies of the person in the images’ Social Security info and legal photo ID, and all names they have ever used in a physical location somewhere; a business that is open at least 20 hours a week.

Over at adult site Eros Zine, my friend (the editor) had to go through all of their images and try to define the difference between a photo that was sexually explicit vs. not. It made him insane; “Is her butt red from a sunburn or a spanking?! Is she holding her breasts in a sexually explicit way, or just posing!?” Then there’s the matter of images that fall into the freedom of speech category — 2257 would prohibit *everyone* in the US from seeing images such as the prison photos from Abu Ghraib. The law is so broad, it can include bloggers, publishers, television and Hollywood. A political or human rights tribe would be wiped off the Tribe map for failing to conform to the laws, by including an Abu prison photo in their photo album.

I told them that the state of the law in the United States about sexually explicit material revolves around keeping pornographers and adult retailers on their toes, never knowing for what, or when, they might be prosecuted for offending “community standards.” The law in the U.S. states that something is considered “obscene,” and therefore illegal to create or distribute, if a court *somewhere* says it is. You might hear people in and out of the adult industry say things like, “Showing urination is illegal,” or “Showing S/M with sex is illegal,” or “Portraying Bill O’Reilly as a journalist is illegal” (and if isn’t, it should be) — and all these cautious statements are incorrect. In fact, there’s only a single test, which is when a court in any of the 50 states decides that a particular thing (DVD, book, picture, fake journalist, whatever) is, by the “standards of the community,” obscene.

Okay, I probably left out the part about Bill O’Reilly, but I was on my toes enough to rake them across the coals a bit to try and let them know what they were about to step into. They told me flat out that they felt that the definitions in 2257 in regards to sexually explicit conduct were absolutely clear — I even asked them to repeat the statement. I asked them to think about the fact that they were going to enter an arena of applying community standards to tribes all over the United States, and what is not obscene here in SF, like a picture of a leatherman in assless chaps, would most certainly be considered obscene to someone in a Kansas tribe.

I thanked them for the courtesy call; it was clear that they had already decided all of this and the call to me was just to make nice. I told them to please call and talk to Jason Schultz over at the Electronic Freedom Foundation before making a move. I don’t know if they did; I have yet to talk to Jason. I got notices in my tribe mail about removing images as the moderator of mature tribes, the penalties and the changes to Tribe’s Terms of Use. I have done nothing. I am waiting to be penalized.

My boyfriend sent me a link this morning, “check out this dude’s Tribe profile!” I clicked the link and went to a signup page, with no login. I signed in, and tried to go to the URL, and went to the same signup page. I can’t get to the link. And what will happen to our RSS feeds!? This tribe is now frozen in Tribe time.

Update: a dear friend (who has a big famous site and wants to remain anonymous) writes me:

A suggestion, though, if I might — please don’t confuse obscenity with “sexually explicit behavior.” I doubt you have, but your post could lead to confusion on that point — whether something is obscene has zero impact on whether 2257 applies to it, nor is 2257 content rescued by redeeming social value or a context of supportive community standards. That’s exactly why the Abu Graib torture photos are in no danger of being deemed obscene, but could still be prosecuted under 2257.”