Yesterday Tribe.net removed all its “mature” age screening pages in favor of making any Tribe marked as formerly “mature” or flagged by anyone who objects to the content, invisible unless you’re in the Tribe. Why care? For one, it’s an interesting experiment to see what happens when interpretation of 2257 porn record-keeping requirements is taken to its extreme, and essentially made into a censorship tool anyone in a tinfoil hat can enforce. Another reason is that they’re censoring users’ content and profiles (mine included). It’s also interesting because you can see just how fucked up and useless the 2257 laws are. It’s like 1984 in there; anything deemed offensive is made to go away. I’m giving them a report card on Fleshbot about how they scored, and below is where I reveal more information about Tribe and 2257, and why I’m feeling a cold, cold anger toward Tribe.net about this whole thing. 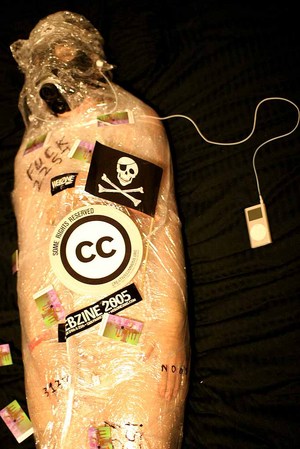 The Details
In Tribe.net’s new Terms of Use guidelines and in emails to users (such as myself), Tribe tells us:

All Tribes marked as “mature” have now been converted by Tribe.net to “private” tribes, meaning that they cannot be viewed by external links nor can they be seen by genreal Tribe members. Only the people in the Tribe can see the Tribe. This renders groups such as The Center for Sex and Culture‘s Tribe (433 members, no sexually explicit photographs, topical discussion on sex education events) — now invisible. The community’s goal of fostering accurate sex information and socially networking all who share this goal, is silenced. Also made to “just go away” are individuals’ profiles that violate Tribe.net’s very unusual interpretation of the 2257 recordkeeping laws, including my own, which contains no sexually explicit imagery (one photo in my profile shows my boobies). And now headmistress is mad: The Smart Girls’ Porn Club, my 450+ member discussion group comprised of pro-porn women is now silenced and invisible to the public.

It Makes Sense if You Stand On Your Head and Squint
But does it make sense to apply 2257 laws (or 2256 for that matter) to a social networking site, such as Tribe.net, Friendster, or Orkut? Only if you have another agenda. Tribe.net is putting themselves in the “republishing category for “pornography”, “sexually explicit conduct” and “obscenity”.

As I wrote in my previous Tribe and 2257 post, it’s important not to confuse obscenity with “sexually explicit behavior”, because it’s two different things in the eyes of the law. but Tribe is telling users they’re yanking both kinds of content. And by including the word “obscenity” in their definitions, Tribe.net now steps into the steaming pile of how to determine community standards of obscenity for their internet Tribes scattered all over the US.

According to Jason Schultz, Staff Attorney at the EFF, Tribe.net “can’t be held to 2257 requirements for things they don’t exercise traditional editorial content control over. Otherwise, all ISPs who host 3rd party websites would be liable as well, and the law explicitly says that isn’t true. So as long as Tribe as a company isn’t editing the content, they can host any groups they want that have sexually explicit material, even if it qualifies under 2257’s weirdo definitions. Moreover, if Tribe had a backbone, they could join the suit to overthrow 2257; it wouldn’t even cost them much, since the Free Speech Coalition is already leading the charge.”

What Really Pisses Me Off
I don’t do Fleshbot for the money (that’s for sure). I do it because our attitude toward sex and culture, adult fun, and intelligent sex speaks to the very core of ethics that make me who I am. And it’s free, and accessible — if you don’t have access to information, *you’re* not free. For many women, the cage has been their own bodies; I regularly have contact with women who have been alive for many decades who have still never had an orgasm. Many women (and men) are still afraid of their own bodies, or are disgusted by their genitals because no one ever told them that what they have is not only beautiful down there, but fun and healthy and totally normal and that pleasure is good for you. And porn is a healthy, if sometimes annoyingly bimbonic, component of shedding sexual ignorance and learning to make healthy choices about individual sex and sexuality.

Now, because Tribe is using 2257 as a content filter, no one can see the club or its many discussions. And it’s insidious; we’re not technically shut down but instead we’re invisible and silenced to everyone except each other in there, and to allow more members in (if they can find out about it in the first place) I have to make them first my “friend”. This means that the concept of “friend” in Tribe is useless; that’s also a lot of effort around adding hundreds of friends and getting them into my discussion groups. Regulated into unfeasability. Think about what that means in a historical context in regards to women and their sexuality, and women and porn. This, to me, is the biggest wrong in all of this. I hope no one in Tribe can sleep at night for a very long fucking time for their role in perpetuating this whole 2257 sham.

And now, my self-indulgent nerdy quote:

“Alright. Leave this camp, and draw a map for anyone who wants to believe your fuckin’ lies. Anyone who wants to put your daughter or her holdings in jeopardy, you show ’em how to get here. And you tell ’em I’ll be waiting.”
–Sheriff Bullock, to the widow Alma Garrett’s father after knocking his teeth out, Deadwood season one.