Violet Blue November 22, 2015 0 pieces of BRILLIANCE put forth by a DARING and DELIGHTFUL reader 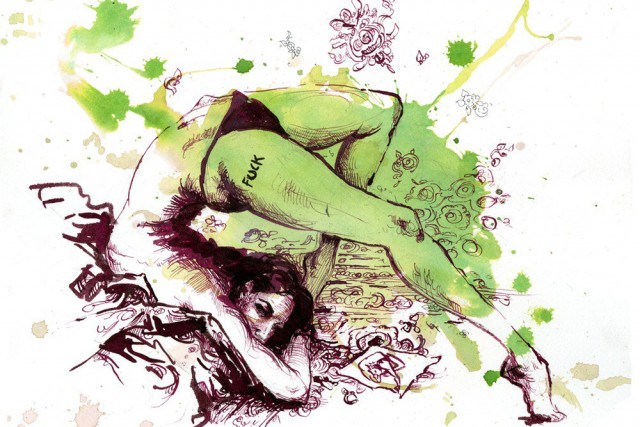 “Because we worked on the margins, we Internet models all knew each other, and we extended one another what protection we could. We spread word about who was a good guy and who was a sociopath, knowing full well that the police would do nothing if one of these sessions ended in rape. I knew a girl who had worked as a bondage model. While tied up, the photographer threatened to kill her. She wept. He let her go. When she went to the police, they shrugged her off. Later, the photographer murdered a different model.”
Tales of Being a Naked Artist’s Model (New Republic/Molly Crabapple)

1. “One day, I had two back-to-back clients, both with the same name. I mixed up my notes and ended up doing a cop cavity search role-play scene with my second guy. He seemed a bit surprised upon seeing me in officer gear and explained that he never did a role-play before. My first client ended up getting a sensual session instead of his cop role-play. Oops.” —Domina Devorah
7 Sex Workers on Their Most Hilariously Embarrassing Moments (Cosmopolitan)

“More than 10 women have discovered that they had relationships with undercover UK policemen, some lasting years, without being told their true identity. On Friday it was announced that police had agreed to give a full apology and pay compensation to Lisa and six other women for the trauma they suffered after being deceived into forming intimate relationships with police spies. … Kennedy had a number of sexual relationships while undercover. The longest was with Lisa (2003-2009).”
Lisa Jones, girlfriend of undercover policeman Mark Kennedy: ‘I thought I knew him better than anyone’ (Guardian UK)

“In March 2013, the Bill and Melinda Gates Foundation challenged the world to reinvent the condom — a device that’s been around for centuries yet has seen minimal technological improvement in the past 50 years. The most promising designers would score $100,000 in seed funding, plus a chance at an additional $1 million to further finance their projects. … Two and a half years later, we’re still waiting.”
2 Years Later, Here’s What Happened to Bill Gates’ Condoms of the Future (Mic)

“A Spike Lee movie set to open Dec. 4, “Chi-Raq,” is a modern riff on the ancient Greek comedy “Lysistrata;” both offer satirical takes on women who go on sex strikes to get men to end violence. But do sex strikes work in real life? A Chicago woman is betting yes: April Lawson started a petition on Change.org to put an end to violence on the South Side.”
Do Sex Strikes Work? (Discovery)

“I hadn’t touched another woman in an intimate way since before getting married six years ago. Then, in the most peculiar circumstances, I was doing it. … After 30 seconds, the experience became too much and I stopped. I ripped off my Oculus Rift headset and stood up from the chair I was sitting on, stunned. It was a powerful experience, and I left convinced that virtual reality was not only the future of sex, but also the future of infidelity.”
Is an Affair in Virtual Reality Still Cheating? (Motherboard/Vice)

“Unfortunately, transgender people are a group that was so marginalized in comics that the only characters trans people could see ourselves in were shapeshifters, aliens and victims of magic spells or science fiction body swaps. While trans characters were scant for most of the history of comic books, these kinds of characters were actually pretty popular, going as far back as DC Comics’ Golden Age.”
The Complete History of Transgender Characters in American Comic Books (Autostraddle)

“The authors of the Motion Picture Production Code, which came into effect in 1930, were rather more cateogorical about the bare human body. Nudity, they argued, is never justified; it “may be beautiful [but that] does not make its use in the films moral”. All actors, directors, and producers were strictly warned against showing the naked body.” (Sound like modern social media? Yep.)
A hundred years of over-baring censors (Economist)

“Sex furniture is big business; Liberator, the biggest industry player in the States, employs 200 people, while its competitor The Tantra Chair ships worldwide to countries including Saudi Arabia (huge fans of calfskin sex chairs, apparently). For those who can’t afford to drop upwards of $1,299 on a custom-designed sex chair, Internet forums will identify which IKEA product gives you an unexpected bang for your buck.”
The Sex Furniture Makers Trying to Make Fuck-Chairs and Foam Wedges Sexy (Broadly/Vice)

Discussing Carol, Cate Blanchett’s new film which chronicles a love affair between two women in 1950s New York City, Blanchett told the press at Cannes with perceptible disdain: “What happens these days is if you are homosexual, you have to talk about it constantly; it has to be the only thing; you have to put it before your work, before any other aspect of your personality.”
Sorry, Cate Blanchett, Gays Really Do Need to Shout Their Sexuality From the Rafters (Slate)