Thomas Roche April 8, 2012 8 pieces of BRILLIANCE put forth by a DARING and DELIGHTFUL reader 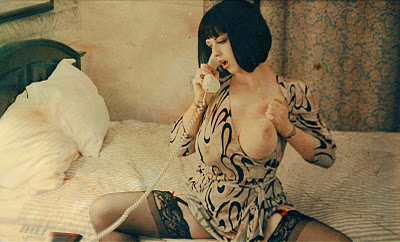 If you’re old enough and/or geeky enough to remember the 1979 Nicholas Meyer film Time After Time, you may recall that when Malcolm McDowell’s H.G. Wells jumped forward in time from about 1895 to modern San Francisco, he explained his being out of touch with world affairs and fashion by 100 years — by telling people he was English.

They all believed him without question.

Well, my beloved Brits…articles like today’s bizarrely time-shifted piece on phone sex in Britain’s The Sun is why I could see San Franciscans actually believing him.

Remember, Time After Time was made before the days when mutton chops, jodhpurs and riding boots became a reasonable choice for daily wear to a dot-com job you could never, ever hope to explain to your parents. In 2012, it’s the steampunk era. Nowadays, if a British guy with a tweed suit and a bad mustache told us he was from Kent then wink-wink-nudge-nudged us as to where he could call for some hot phone sex, we’d be annoyed because he’s a hipster, not worried because he might be a time traveler. We’d assume that phone sex was the new retro trend the cool kids are getting into, and we’d make fun of him behind his back, same as we do with everyone.

Here in The Future, phone sex has its devotees, but it’s a dying profession. There are still sites like Niteflirt, but even there the traffic is often pushed to cam or “phone with cam.” Commercial phone sex feels as out-of-date to me as a brandy in the drawing room followed by giving the maid a good birching. To me, “Phone sex” is something guys in chat rooms demand from women they just met, not something people pay for.

But, as our UK readers are sure to inform me (and yes, I already know), The Sun is published for a grandmotherly audience. To them, phone sex is still a big enough and weird enough “thing” that its myths need to be addressed in a news article. And entitled “How Sex Line Worker Fools Punters,” it is intermittently sex-negative and salacious, but sure to give full-on robot wood to anyone who fetishizes English housewives.

The article never once suggests the positive takeaways — that fantasy is a vibrant art, or that Maureen’s experiences illuminate how the male sexual psyche works. It’s more concerned with the fact that men are stupid.

As Sexy Scarlett breathes heavily into the phone and describes her saucy fishnets and satin undies, the punter on the other end of the line would never imagine she was really 55-year-old Maureen Gardner.

Wearing tracksuit bottoms and nursing a cup of tea, with the phone wedged under her chin, she spends each evening pretending to be a lusty young callgirl to earn extra cash.

…She says: “I’m such an actress, I even add sound effects to make their experience realistic. My favourite is flicking the elastic on my manky pop-socks.

“The snapping noise against my skin emulates the sound of the sexy fishnet stockings that I promise the men I am wearing. Of course, the reality is that I’m taking the bins out.”

…“I tell the men I’m tall and slim with jet-black hair down to my waist and I’m almost always holding a whip. In reality, I’m short with curly red hair and often carrying the iron.”

Maureen’s punters love to feel as if she is really in the room with them, so she has found some odd ways to make her sex noises as lifelike as possible.

She says: “I find that if I put my knees up to my neck, it compresses my diaphragm, then my groans sound pitch-perfect. I also watch When Harry Met Sally as homework. Meg Ryan was my sex noise idol. It really is quite amazing how gullible men are.”

She says: “I would threaten in my best Scandinavian accent, ‘My bite is as bad as my bark.’

As if to drive home just how unlike Scarlett and Katia Maureen is, the article features conspicuously staged photos of Maureen talking on the phone while ironing and washing dishes.

Frankly, I think she’s pretty hot, but that’s just me.

Photo: From the photoset “Larkin On the Phone, Hollywood, 2011,” by Mark Maggiori.