You Are Here: Home → 2011 → October → Skydiving Sex Scandal! But Who’s Getting Screwed?

Thomas Roche October 17, 2011 8 pieces of BRILLIANCE put forth by a DARING and DELIGHTFUL reader 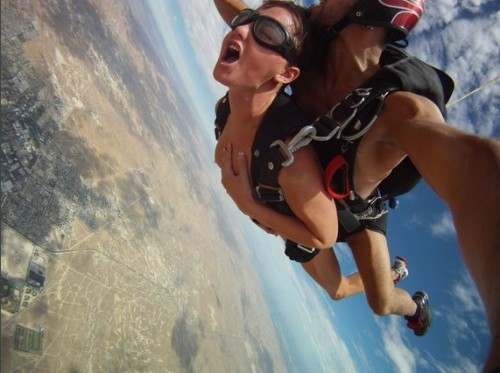 The photo on the right is a screencap from NBC’s site, showing the video that Torres made with Howell:

Something tells me this wasn’t Hope Howell’s first time. By that, I mean it wasn’t Howell’s first time with the “Valley-O” face, that ultra-fake female-porn-star “OMG-yes-my-mind-is-being-blown by your cock!!!” face sold in roadside kiosks for $1.50 to any woman headed north across Ventura Boulevard.

It gets weirder, since Howell told the local ABC affiliate that Chrouch lied about not knowing about the video — according to Howell, Chrouch was involved from the get-go: “Our boss was there and we planned out everything.” She said about getting fired, “I feel like that was a stab in my back.”

I forgot to mention that I am also a 1000 year old DAY WALKING VAMPIRE!!! I feed of the flesh and souls of SEXY BITCHES!!!!

The end of the world is upon us so have fun while you can folks!!!!!!

So, like, I’m getting the sense this wasn’t Alex’s first time, either. Check out this screencap where Torres appeases Papa Legba with a little midair zombie love: 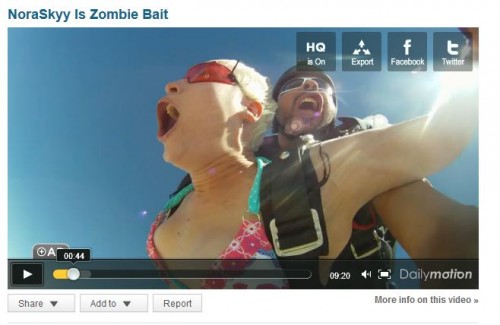 This is obviously a publicity stunt from the start, but I seriously doubt it’s an example of Torres and Howell conspiring to screw their employer, or even do something they thought they could “get away with” and then get proven wrong. I find it much more likely that Skydive Taft owner David Chrouch was in on the whole thing from the get-go, for publicity reasons…and then he chickened out when the cops came sniffing after him.

That, or maybe this is all bullshit — and Torres, Chrouch and Howell pulled the whole gig to get Skydive Taft some publicity, and maybe neither one has actually been fired. Who knows?

What’s creepy about it is that the police “backlash” is ridiculous and ineffectual. The Taft Police Department even agrees no crime was committed, though they’re pretty pissed off about that fact. Time was, the cops used to get pissed off when you broke the law, not when you specifically didn’t break it. But a local business owner has all sorts of things to worry about that can be handled extrajudicially. Police harassment… licensing… potentially property taxes. That all went from ugly to nasty when the Taft PD told the press they were getting the Federal Aviation Administration involved. Keep in mind that the FAA regulates more than individual pilots’ licenses, and the owner of a skydiving school that’s run seriously afoul of the FAA is pretty much screwed without a parachute.

Is this some kind of goofy police scandal? Does Colombo need to take a trip to Taft, California, to blow the lid off police corruption and the law enforcement vendetta against skydiving sex? Did David Chrouch fire Torres and Howell under police pressure? Did he know about the thing from the start? Are the local cops corrupt enough to force a business owner to fire two employees even after it’s been determined no crime was committed? Or is this a Federal beef, with regulators conspiring to enforce an extralegal and non-consensual morality clause on the proprietor of a small business and, by extension, his employees?

Who cares? ROFL, they fucked in midair!!! EATFUCKLIVESKYDIVEMUTHAFUKKAS!!!

There’s one last important point that needs to be made. I’ve alluded to it above, but I want to say it explicitly. If this all sounds funny, well, it is. But there’s a very serious matter of civil liberties, and it’s related to the Federal regulatory environment in the U.S. overall.

Regulatory agencies wield extrajudicial power that can be enlisted to enforce “morality,” rather than used for its real purpose, which is safety. It’s not illegal to have sex on a private plane, but it’s illegal for a pilot to fly a plane while “distracted,” and the FAA’s contention is reportedly that said pilot might have been distracted, as the ever-charmingly-offensive Michael K of DListed puts it, “The FAA is trying to figure out if the pilot was distracted by airborne titties flapping around like two jellyfishes having a sneezing fit.”

But Howell herself told a local ABC affiliate that she never touched the pilot, and he was not involved. Nonetheless, it’s being reported that some of the video Torres and Howell made shows the couple having sex in a jump seat next to the pilot.

To my mind, that doesn’t necessarily indicate any more distraction than drinking a cup of hot coffee while flying a plane — and potentially spilling it into your lap. The idea that a trained and licensed professional pilot would be incapable of flying a plane safely because a couple was having sex nearby is nothing more than dose of anti-sex hysteria.

The FAA’s “investigation” of the pilot is grasping at straws. It’s insulting and ridiculous — clearly an attempt to regulate sexual behavior because of disapproval of same, not due to a genuine concern about aviation safety. A crime cannot be prosecuted without witnesses, without evidence — but the regulatory environment doesn’t require commission of a crime. If the video showed the pilot’s participation, we wouldn’t be hearing about an “investigation.” The pilot would have already had his license pulled. The FAA is just blowing smoke out its afterburners.

Why do I care? Why should you care? Because just by discussing an investigation, the FAA is engaging in a kind of extrajudicial regulatory morals-enforcement that runs dangerously close to overstepping the boundaries of government. This is the kind of double standard the FCC is crazy with. If the pilot in the Taft case is seriously investigated, it’ll look suspiciously like Janet Jackson’s nipple slip. It’ll look like the laughable Seven Dirty Words. It’ll look like Eric Idle being fined “Five thousand bucks a fuck,” by the FCC for cursing on a radio show, to which he sang, “That’s more than Heidi Fleiss was charging me!”

And Eric Idle sang it on the internet — because that’s where he could say “fuck” all he wanted. The FAA, like the FCC, is apparently in the business of placing extra-legislative regulations on morality…and doing it badly. Eric Idle could afford five grand a fuck. A private pilot can’t, even if there’s only one fuck and it (mostly) didn’t happen on his plane.

When Federal regulatory agencies overstep their boundaries in order to enforce morality, even though the “transgressions” committed are inoffensive (or just irrelevant) to the vast majority of people, they enforce a kind of morality that is designed to exist outside of legitimate lawmaking and regulatory endeavors.

The FAA needs to back off and stay the hell out of sexual morality.