Thomas Roche June 28, 2011 4 pieces of BRILLIANCE put forth by a DARING and DELIGHTFUL reader 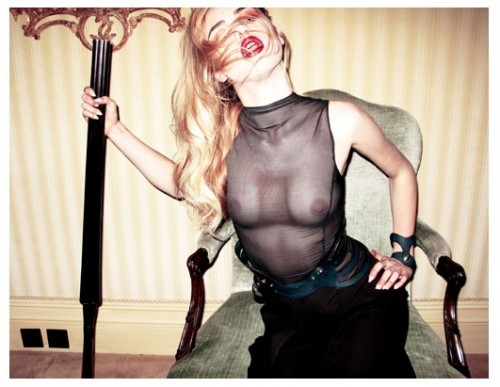 A journalist named Mac McClelland covers human rights issues and politics for Mother Jones and other publications. I decided she’s extra cool when I saw her phenomenally ballsy, if problematic, piece about wanting to get fucked at gunpoint.

That’s a gross oversimplification of what the article is about; basically, it’s about how her traumatic experiences in Haiti affected not just her sex life, but her psyche overall. A certain flavor of sex was how she helped herself move through that, and — like much first-person journalism — the article gives the almost certainly ultra-oversimplified impression that one “thing” was all it took. Still, the article is thought provoking as hell.

Here’s an excerpt of the passage that, frankly, set me off and had me ready to write an outraged piece about the problems of engaging in fucked-up, highly dysfunctional and highly risky kink (which McClelland certainly did not invent). Here’s the interesting and disturbing opener to the article:

It was my research editor who told me it was completely nuts to willingly get fucked at gunpoint. That’s what she called me when I told her the story. We were drunk and in a karaoke bar, so at the time I came up with only a wounded face and a whiny, “I’m not completely nuuuuts!” Upon further consideration, a more explanative [sic] response probably would have been something like: Well. You had to be there.

“There” would be Haiti, where I’d just spent two weeks covering the one-year anniversary of the earthquake that shook the country into ugly chaos. There, a local regular at my hotel restaurant who is not accustomed to taking no for an answer had gotten desperate. After proposing for the 87th time that I have intercourse with him, he was grasping for anything that might change my mind, trying eventually, wildly, “We can do this at gunpoint if that sells it for you.” And actually, it did, yeah.

There are a lot of guns in Haiti. Guns on security guards in front of banks and gas stations. Guns on kidnappers who make a living snatching rich people, guns on rich people who are afraid of kidnappers….Guns in the hands of the 12,000 United Nations peacekeepers, who sometimes draw them too quickly in civilians’ faces and always sling them carelessly across their laps in the back of UN trucks, barrels pointed inadvertently at your face while you drive behind them in traffic. On that reporting trip, I’d been fantasizing about precisely what the local guy proposed, my back against a wall or a mattress with a friendly gun to my throat. But the plan was vetoed about as soon as it was hatched, when I asked him if his firearm had a safety and he said no. Like I say: I am not completely nuts.

Okay, so…I’m not sure what I find most disturbing from a gun-nut perspective. It’s weird enough that that was the question she asked of her potential gunfuck/guerrilla psychotherapy partner, but…his answer was a simple “no?” Um….was this a revolver, a zip gun, or some kind of howitzer? “Do you fucking know what the fuck you’re fucking doing when you handle a gun” would, for the record, have been the way I asked that particular question, and generally speaking someone I picked up in a restaurant would not be the person whose “yes” I would be most inclined to trust in matters of any caliber. No matter how kinky you are, gun sex role plays with real guns are not something I’d encourage after going home with a guy you met at the local hash house with a $6.99 half-carafe of chardonnay shimmy-shaking in your tum-tum atop your guacamole burger.

But the article’s about far more than that. With a spoiler alert, I’ll tell you that the kinky sex she ends up having is with an occasional partner (sort of a fuckbuddy) she trusts. This is someone with whom she’d done a bit of such things before, which to my mind makes it utterly within the realm of not-off-your-rocker, no matter how much personal trauma is involved. It’s not death-defying; no lethal weapons come out of their holsters. It’s garden-variety kinky-sex rape-role play; it could even be called, if you wish, a little bit o’ rasslin‘. But anyone who’s done it knows how fucking intense it can be — and again, we’re talking someone with recent PTSD symptoms, here.

Why do I think you care? Not because, as you might expect because I’m writing about it, because the media (in this case McClelland) fucked up in the way it/she wrote about sex. (More on that later, but for now let’s just say I think it’s one of the most interesting first-person articles about sex that I’ve ever had the privilege to read).

In the midst of a completely “average” spanking, a bondage session, or even just a little dirty talk, childhood hurts, sexual trauma, non-consensual experiences and generalized bugfuck-ness can reach critical mass somewhere between the sternum and the huevos (or XX equivalent) and scald both (or all) parties with radioactive steam. From a mellow evening hair-pulling adventure, one can walk away glowing — and not in a good way.

At its core, the technique of the safeword helps to guard against this and a zillion other things that power-exchange role plays can bring up in practitioners — usually, though certainly not always, in the “bottom.” But even an experienced bottom can’t predict every twist and turn of their brain’s stinky back-alleys. Everybody has some trauma in their background, and one doesn’t always know it’s there, or that it will become an issue, until it becomes an issue. What’s more, anybody can decide something isn’t working with them. But even a safeword doesn’t protect against the kind of trauma that a pair of consensual role-player can crowbar out of each others’ psyches when one has recent trauma severe enough to cause PTSD symptoms.

But that doesn’t describe the experience of the vast majority of people who do kinky sex or role play. Far more of us, even those of us who spend our lives reading, writing and thinking about the kinkiest sexual fantasies imaginable and what they “really mean,” live our sex lives in the real world, where emotional risk is part and parcel of living — let alone of jerking off, let alone of having sex with other people.

Still, while McClelland might be far from an unassailable advocate for safe, sane and consensual kinky sex, her disclosures hit me hard and emotionally.

Speaking for myself, my professional work is not just impacted by my sexuality and my emotional states, but on a daily basis my productivity is often determined by them. Never having been to a war zone or a major humanitarian crisis, I can only speculate that the same must be true a hundred times over of women who operate in risky environments like McClelland. Maybe that’s why I find it so moving when McClelland writes passages like this:

The shocking lack of sympathy I got from some industry people I talked to about my breakdown was only compounding my concerns that I didn’t deserve to be this distraught. “Editors are going to think I’m a liability now. What kind of fucking pussy cries and pukes about getting almost hurt or having to watch bad things happen to other people?”

But I assert that it takes brass ones the size of cannonballs for a respected and award nominated female journalist to air this kind of stuff in public. The big risk, like it even needs to be said, is that by writing about a certain flavor of “perversion,” she’ll encourage certain douchebags to stop taking her seriously as a journalist. But for what it’s worth, I think anyone who can walk into what amounts to a war zone in Haiti and come out in public as having fantasized about being fucked at gunpoint is pretty bad-ass.