Thomas Roche June 8, 2011 9 pieces of BRILLIANCE put forth by a DARING and DELIGHTFUL reader 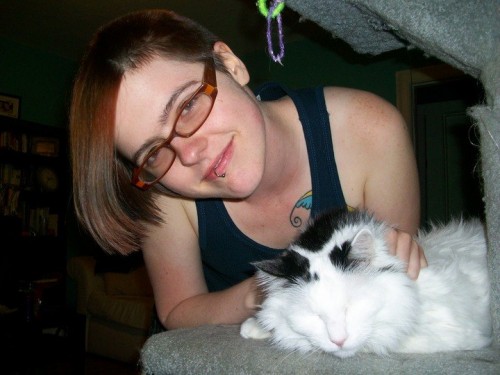 Yesterday in Gay Teen Girl Abducted and Tortured at For-Profit American “Re-Education” School(s), we related the account, first posted to Reddit, of Xandir, whose story includes accounts of physical and verbal abuse, dishonesty on the part of staff, and a blatant program of brainwashing.

Xandir will now be coming out about her story live and speaking at the “Bawdy Storytelling” event. This will be a pretty big deal for Xandir: tonight, June 8, 2011, at the Blue Macaw, 2565 Mission Street in San Francisco, $10 at the door, doors 7pm, start time 8pm.

Xandir, who is preparing to speak with various media outlets after this interview, identifies as queer (all original posts – such as Reddit’s – reference her as “gay” and this is a formal correction as noted in this interview). “Storytelling” event organizer Dixie La Tour put me in touch with Xandir, who was willing to answer a few questions for Tiny Nibbles readers.

Thomas: First, Xandir, let me say that you are phenomenally brave for going public with your experiences. I stand in stunned admiration for someone your age who is able to face down an experience like the one you had at Cross Creek. What advice do you have, if any, for people who have had similarly abusive situations and are trying to find the bravery to speak out and confront what happened?

Xandir: Thank you. It has not at all been an easy journey, but the support I’ve gotten from those around me, people who have had similar experiences, and complete strangers has definitely kept me going and I feel good  about shedding light on this subject. The advice I would give people who have experienced abuse of any sort and want to share about it is to take their time and be gentle with themselves. One of the most traumatic things about Cross Creek was the fact that we were forced to talk about things long before we felt ready or willing to talk about them. This method was absolutely humiliating, counter-productive, and downright damaging. Talking about these sort of things is extremely difficult for most people, so I would encourage people to do it when they feel ready. While it’s important to take your time, and feel safe, I also think it is important to not stay silent about these experiences forever. The only way these facilities can be shut down is if they are exposed.

Thomas: Your story got out into the world in classic viral-media fashion. How exactly did you decide to “go public”? Or had you already “gone public” and it only thereafter started getting questions? Has it all happened very quickly or was this something that built over time?

Xandir: My post started as a FaceBook note which I wrote after reading in a Cross Creek alumni group that there was going to be a class action lawsuit against WWASP for child abuse and human rights violations. People in the group were getting rather heated about their opinions on it, so I decided to write my experience. Later, one of the moderators of the “Troubled Teens” section of Reddit, a section dedicated to helping survivors of these schools share their experience, as well as help parents find alternatives to “tough love” schools, contacted me asking if she could post my story. I agreed, and with in days everything blew up. It all happened very quickly. I went on a camping trip shortly after it was posted and returned to an inbox full of messages, including some from reporters wanting to talk to me. I never could have imagined my story would receive this much attention.

Thomas: What is your hope in telling your story? Do you hope that the word getting out about these programs will shut them down, expose them as at least partially fraudulent, cease the use of public funds to send students there? Or do you merely want to tell your story so that others who went through this know that they are not alone and that they, too, can reject what they were “brainwashed” with and find a new community.

Xandir: Originally my intention was just to share my story, to validate my own experience as well as others, as I didn’t think sharing it alone would cause such a buzz. Without a doubt though, I definitely would rejoice in seeing facilities like this shut down. They’ve hurt far too many children and have gotten away with it for far too long. It needs to stop and I want to do everything in my power to end this type of abuse. I hope too, that sharing my story will show those who have experienced similar things that they are not alone, and they by no means need to feel ashamed, blame themselves for it, or continue to believe the lies they’ve been told.

Thomas: In telling your story, what do you hope will change?

Xandir: I hope people will start listening to people with stories like mine. I hope people will stop trying to numb themselves out and ignore the fact that these things happen. I want places like this to shut down and I want there to be laws put in place to prevent them from popping back up again with different names like they have done in the past.

Thomas: You mentioned to me that, while the posting of your story affixed the label “gay” to you, that’s not a label you’d choose for yourself, and you prefer the term “queer.” I know the person who posted your story certainly had positive intentions, but do you think that the ease with which many of us (myself included) can label someone, for instance, a “gay female,” is a little bit scary in the context of how non-transparent your experience at Cross Creek was. That is to say, is it eerily reminiscent of the fact that you had NO IDEA for quite some time that you were being sent there primarily because your perceived sexual orientation — using, in a sense, a label you had not chosen?

Xandir: Pixel8 definitely had good intentions and apologized profusely for the mislabeling. I prefer the word “queer” to “lesbian”, “gay”, or “bisexual” as I’m attracted to all genders (not just those within the binary,) and I’m also in the midst of figuring out my gender identity, which is something I’ve been unsure about since childhood. “Queer” as a reclaimed word feels very empowering and fits me better than any of the other terms, as my understanding of it is that it is sort of an umbrella term for people who are not heterosexual, heteronormative, or cisgendered. This to me feels very liberating and unrestrained.

Throughout my life I’ve definitely been mislabeled by many, but the one that has had the most difficult impact on me was my mother. At 13 I came out to my mom as bisexual (at the time, as you might imagine, I was unaware that there were more encompassing terms) and she absolutely would not talk about it with me. I overheard her at one point having a phone conversation with someone saying “my daughter’s declared herself a lesbian.” This was infuriating to me. I felt very unheard and unaccepted. She didn’t speak of it again until after I had been in the program a for a while, and we were in one of the mandatory Parent-Child seminars, and she had been asked to talk about the reasons she had sent me to Cross Creek. She once again used those exact words. That I had “declared myself a lesbian.”

I later tried asking her about other factors which therapists, staff, and other students there had told me were likely the reasons I had been sent there. I asked her if it was because of the drug experimentation, and she said that she never saw that as all that big of a deal. I asked her if it was because I had had sex a couple times (which was with a guy, by the way) and she said she didn’t even know about it prior to the program forcing me to disclose this info to her, much to my humiliation. I had had a boyfriend before the program whom my mom knew about, but somehow in her mind I was still a “lesbian” and I needed to be punished and reprogrammed for liking girls.

Thomas: You are going to be relating your story at Bawdy Storytelling on Wednesday night, which I’m sure will be a very intense experience. Having written of it and had it get such a powerful response from the community, if people can come to see your tale, what would you like people to know first?

Xandir: Just that this story is one that needs to be retold. I feel as though this is something people hear about in passing, but never really think or talk about. Silence and secrecy is what keep these places thriving. Others with similar stories should start speaking up when they feel ready too.

Thomas: What did it feel like when your story began to get media traction? Are you concerned about the distortion of your story in the media? Especially given the strong media ties of many of Cross Creek/WWASP’s associates?

Xandir: It’s been some what overwhelming, as I just wasn’t expecting to get national coverage off of something that started as a FaceBook note. It still feels kind of surreal. I’m totally thrilled that people are finally starting to pay attention to these issues, though.

I am concerned about the media. I’ve been cautious about who I’ve agreed to talk to about this stuff.  I don’t want my story or words to be twisted or over-edited. Tiny Nibbles is the first form of media I’ve answered questions for about this. Next week I’m talking to the ACLU, a magazine in the UK, and possibly a few news reporters. I’m nervous, but like I said, this stuff really needs to be talked about.

Thomas: Have you been able to find a supportive community since you left Cross Creek? You speak eloquently about the need to unlearn the interactive cues you learned while inside; have you felt like you’ve gotten support from the GLBTQQ community in the San Francisco area and elsewhere?

Xandir: I have found a wonderful group of people in the bay area and I could not ask for a better support network. Since leaving Cross Creek, I definitely feel like I’ve gotten a ton of support from the queer community, as well as people I’ve gotten to know from doing activism, social justice, and anti-violence work. People in various sex positive communities in the city have also been very supportive in helping me shed religious indoctrination and help me return to the idea that sex is not something that will kill me or cause eternal damnation. Heh. I’m also starting to discover that there are quite a few other people in the area who have had similar experiences to mine, so I’ve been working on creating an in-person support group for survivors of institutionalized abuse.

Thomas: Xandir, thanks so much for taking some time to answer our questions. And best of luck at the show tomorrow night.