Violet Blue May 29, 2011 0 pieces of BRILLIANCE put forth by a DARING and DELIGHTFUL reader 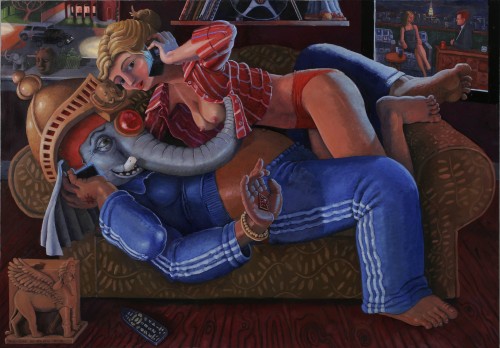 Prior to my mad writer’s dash to retreat and focus, I tweeted that I was headed to Sacramento. In response, a Twitter friend suggested I should stay at The Citizen Hotel (as did Thomas Roche). It’s one of the coolest things that’s happened to me via my Twitter account. The hotel tweeted a hello to me, and that got me to take a closer look and discover that the hotel is a gorgeous politically-themed environ with a heavy accent on scandal and naughtiness. In fact, one of the in-house bars is actually called The Scandal, and The Citizen has saucy packages with names like the “Full Stimulus Package” which encourages ‘dirty politics.’ I love it!

I was reading in the bar last night and got to talking with the bartenders – one whose ears perked up when I mentioned that I write and speak about sex and technology. I’m so glad he mentioned his work as a painter, as I just looked him up and – wow – his giant paintings in oil are fabulous. Playfully dirty, they’re all about gods, goddesses, sex and technology, with highly entertaining doses of pop culture.