Violet Blue March 24, 2011 3 pieces of BRILLIANCE put forth by a DARING and DELIGHTFUL reader 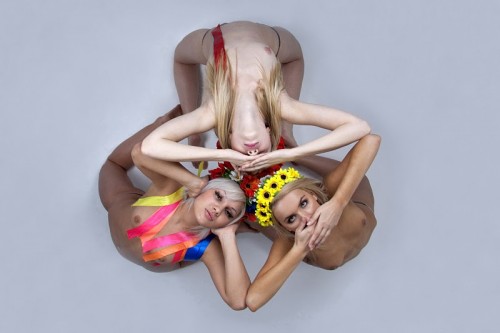 While no one is surprised to hear news that anyone or anything remotely human sexuality related has been banned from Facebook, it still sucks to find out that it’s still happening. A while back I posted a salute to Womens’ Rights Ukranian civil disobedience group FEMEN, which was well-received by many readers, and despite their no-porn stance, many of us became admirers. The salute post includes an interview and video, and they discuss their activist work to raise awareness around human rights issues, sex work, and sex trafficking in the Ukraine.

Copyranter posted about FEMEN’s ban and boot yesterday, with a link to FEMEN’s LiveJournal page and the “see no evil” photo above. In Zuckerberg vs. Boobs, one translated line reads, “The Internet is less than coping with the role of a refuge for freethinkers and more implants bans and censorship, where they are not relevant.”

I think it’s like any corporate structure, really. They’re not ever going to give a shit about real people and meeting the actual needs of humans. Does CNN care about being accurate? Does Flickr care that I’m a paying customer when they delete my content without showing me what they’ve deleted and cripple my account without even telling me (and have done so repeatedly for the many years I’ve paid them for the pleasure)? Does Facebook care about extending equal services to… anyone? Why should they follow any rules, when they can make a quick dollar or extra pageviews?

Very fast, the internet’s services have become the things we went to the internet to get away from – self-censoring interests that only care about making a buck off of us. I think the mistake we’re making is thinking that because these big companies are online where everyone is equal, and they have done well to fool us into thinking it’s safe to put things we care about in their custodianship, that they are not going to behave in discriminatory ways toward us. Right now, there is no accountability for these companies to keep their word, and so naturally they’re going be on their worst behavior. They don’t need to bother with actually making a whole and complete business model that can be adjusted for all levels – sustainable models for long-term success – because it’s easier to just keep screwing people who don’t – yet – have a better place to go.

Fact: you will not be treated fairly or equally by Facebook, Flickr (Yahoo), Google, Apple, CNN, etc. Ever.

I’m sorry FEMEN got booted from Facebook *and* YouTube, along with all the other people I know. I hate seeing people and groups pushed to the margins of the internet, and the playing field become increasingly uneven. I hate seeing Apple keep that fucking awful anti-gay app in its store and how hard thousands of people had to work to make Apple wake the fuck up about it. No one I talk to is happy with this atmosphere. So many great and talented people here in the Bay Area and Silicon Valley are fed up with the inhumanity and corporate greed, which we all know is a symptom of a deeper problem, and they are quitting the big companies in droves – or actively preparing to.

We desperately want it to be different. But we still live in a world where progress only happens with funerals.