“The plural of ‘anecdote’ is not data.” #LadyPornDay

Violet Blue February 22, 2011 13 pieces of BRILLIANCE put forth by a DARING and DELIGHTFUL reader

The widget above is the instant results for a real-time search for #ladypornday on Twitter.

A heated debate about whether pornography provides “a good public service” ended late Thursday in the historic hall of the Cambridge University Union Society with Cambridge students voting 231 to 187 in favor of the motion, according to the U.K. Press Association.

The title of this post was Fischer’s crowning blow to Dines: is the line Jessi Fischer bitch-slapped Gail Dines with in the room packed with academics at Cambridge. That line is the new “There can be only one” Highlander-of-ladyporn comeback lines, and it was the smack heard around the world. Huge.

Of course, it was not delivered whole because Gail Dines is such a lady and consummate professional that she actually interrupted Fischer while Fischer was taking her turn speaking.

But we have to give Dines a little pardon because she was already digging into a pie made of 50,000 crows called your statistics are fake and you finally met a woman with balls enough to say so and backed it up with facts. And for religious reasons Dines does not wear a pearl necklace so she could not clutch it in horror at the crude American display, which is the usual (and proven) line of defense that proper English ladies take.

* If you’re not familiar with Dines and Co. take a minute to get up to speed here. Also: all writing on Gail Dines. 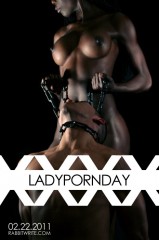 I am saying that Dines and Co. have purposely created, fostered and maintained an environment that is hostile to challenge, and therefore actively campaigns against discussions of pornography that are not their own.

They shut us up by shaming us and scaring us with threatening displays of sexuality. Pretty basic and effective tactic.

And to this effect, Dines and Co. continually shut out and categorically ignore pro-porn women – the millions of us, and those who identify as feminist. We have all been edited out of the discussion.

Don’t tell a woman what to think about her own sexuality. Just don’t.

It’s an open discussion. We deserve that. I mean, I like to look at the inverse proof on things. For instance, last week a same-sex couple were denied entrance to a creationist museum: two men purchased tickets to a tour and dinner, but were told they could not enter as a same-sex couple and were not refunded their money.

The punchline is that they were not “together” but were two men going as a pair. It seems to me that hosting gay couples would be a tremendous opportunity to “save” them in the eyes of god. What better way to show them that being gay is a sin than by bringing them into a prime showcase for conversion?

I apply the same thinking to women like Gail Dines who campaign and attempt to create movements with ideology rather than facts. The most powerful cults (the ones who get people to commit mass suicide) control the sexuality of their followers. It’s the most personal and effective non-violent way to claim power over another person.

You can literally get anyone to do anything if you have their belief and their sexuality in your pocket. Anti-porn crusaders don’t need facts because they have the key cult elements in place. Which is why we’ll never see Dines and Co. do the equivalent of hosting the gay couple in the creationist museum. (The pro-porn feminist in the henhouse, anyone?)

* This blog is ten years old this year. We’ve come a long way, don’t you think?