Violet Blue December 31, 2010 4 pieces of BRILLIANCE put forth by a DARING and DELIGHTFUL reader 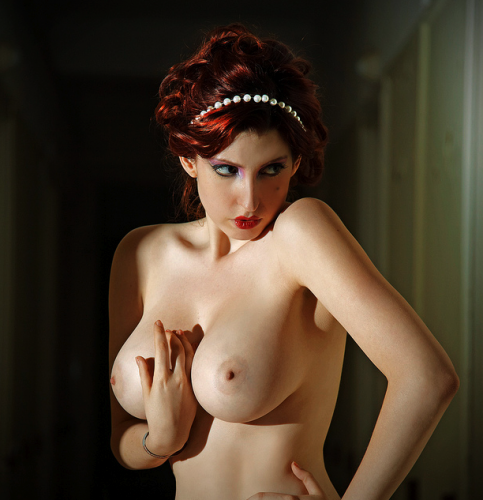 On Thanksgiving and Christmas one of the world’s top erotica writers and editors, literary siren Alison Tyler gave us a very special (and explicit) serving of erotica just for TinyNibbles readers.

She wrote this story just for tonight – only and exclusively for us – to be published here for the first time. Thank you, Alison! If you like this, be sure to give her a shout on Twitter.

I’m proud, honored, and totally titillated to share with you “Pavlov’s Balls” by Alison Tyler. In it, a girl does crazy things to her boy to get him to perform on a countdown… Photo: A is for Asylum by B.A.S.

“You’ll come when the ball drops.”

“Name a better way to ring in the New Year than with a hard O.”

“But how, Molly? I know I’m good, but I don’t exactly come on command.”

Simon stared at me. I stared back at him. I could feel myself getting wetter by the second. “We’ll need a lot of practice, of course. I don’t expect you to shoot simply because I…” I snapped my fingers, “snap.”

He still didn’t understand. No worries. Sometimes people need a visual explanation. That afternoon, I brought home a timer—one of those gizmos that clicks loudly as each second passes. Tick-tick-tick. Simon watched as I spun the dial.

“You think I have the hots for kitchen gadgets? I might be kinky, Moll. But I’ve never wanted to fuck the toaster…”

“How long did you set the thing for?”

“Ten minutes.” I got on my knees. He looked down at me, his dark gray eyes wide, his expression one of impending pleasure. I could tell that he still didn’t understand what I expected, but he was game. How game? His cock practically ripped open the button fly itself. I only needed to give his Levis a tug and then he was free.

“You watch the timer,” I told him. “I’m going to be busy elsewhere.”

I drew the head of his cock into my mouth and began to suck him. Simon groaned and leaned back on the counter. I could hear the steady ticking of the timer, but I paid more attention to the way Simon’s body was responding. I’ve learned his tells over the years. I know when he’s getting closer, when he’s right on the cusp. I wanted to take him almost the ledge, but I didn’t want to let him jump.

I flicked my tongue around the head of his cock. I sucked hard on the tip. I worked the shaft in one hand while I brought my mouth lower and lower. Just because I’m the top in our relationship, doesn’t mean I don’t like to do a little deep throat when I get the chance. I made him slippery wet and jacked him with my fist while I ducked down and nipped at his balls. Simon’s thigh muscles tensed.

“Don’t even think about coming,” I hissed, “not until that timer rings.”

I moved him then, so that he was facing away from me. I reached for the timer and moved it so that he could keep his eye on that little clock face. Then I parted the firm, muscular cheeks of his fine ass.

I already had the strap-on under my clothes. I let down my pants and reached for the lube I’d set on the kitchen table. Simon’s body tensed. I oiled him up and then slicked up my toy. Unfortunately, when I pressed the head against his tight hole, Simon came.

I withdrew immediately and told him to clean himself up. I didn’t fuck him again for four days.

On Monday evening, I set the timer for seven minutes.

“I want you to be fine tuned,” I explained. “I want to get this down to an exact science.”

He glanced down, checking me out between my legs. I knew he was hoping for the strap-on. Instead, I brandished my favorite paddle. “Bend over the sofa,” I told him. “And keep your eyes on the timer.” I’d set the tool on the coffee table. I could tell from the instant grimace on Simon’s face that he had no love in his heart for the ticking. I didn’t care. I started to spank him, going hard from the start. Simon didn’t cry out or beg me to go softer or slower. But I knew when the heat of the punishment started getting to him. He squirmed slightly. He arched his hips. He lowered his chin. I knew his eyes were shut tight. I could imagine what he was going through inside. I’m no sub, but I understand the allure of the pain-pleasure dance.

Simon’s cock was growing harder with each stroke And yet there was also the ticking of the timer.

Simon needed me to play my cards just right, to spank him at the speed and rhythm he craved, but not to take him to the end too quickly. I watched those seconds tick. I heard the constant click. I waited until exactly the right moment, and then I slid my hand beneath him and grabbed his dick.

Simon said my name as he came.

With 30 seconds to spare.

“Listen, baby.” I lit the candle. His eyes grew wider. “Pay attention. For me.”

Simon sucked in his breath. He looked so pretty there, tied to the mattress, watching as I tilted the candle to drip tiny drops of wax in a line down his broad chest. I worked slowly, steadily, to the ticking sound of the timer. Simon’s whole body tensed. I brought my mouth to his cock and sucked him once, hard, and then I let a drop of wax hit his upper thigh. He groaned and bucked. I sucked again.

“Focus,” I whispered, and I saw him turn his head and stare at the timer. I didn’t know how long we had left. But I liked that Simon was doing what I had told him: paying attention. Not only to his impending climax, but to the tick-tock melody of the timer.

He still flinched each time the wax drops decorated his skin, but he didn’t come. Instead of straining to reach his climax, he was working like a good boy to stave off the pleasure. Not until I gave permission, but until the timer rang.

He missed the mark by 10 seconds. I didn’t punish him.

By the time New Year’s Eve arrived, Simon was practically a pro. I could turn the timer to any amount I chose, and he could come when the bell rang. The only trick now was to choose the time. How long would I give him until the ball dropped?

I set the timer for fifteen.

Simon looked at me. I was pushing things, wasn’t I? We’d been working to get his climaxes to the second. But I hadn’t made him last longer than ten minutes. I opened my fist to show him the plug.

“Can you handle this?”

“What do you think?”

I liked that saucy tone. He’d pay for it later, but I still gave him a smile.

He did as I said. I lubed up the plug and worked the toy into place. This one was larger than usual. Simon groaned at the sensation of being filled.

“I’m going to cane you,” I said, showing him my favorite weapon. “One stroke for each minute.”

“You’ll say ‘thank you, may I have another?’ after each stroke.”

Simon snorted. I gave him the first cut without a word. A freebie, if you will.

His laugh turned to a moan.

“I can’t wait to kiss the welts afterward,” I continued. “Your ass looks so divine when you’re sporting my marks.”

He didn’t respond to that. I didn’t expect him to.

Now, we were both slaves to the timer. I gave him a fierce blow. He thanked me and asked for the next. I would have loved to slice right into him, lining the second blow under the first. But I didn’t give in until the timer clicked around again.

That gave him plenty of time to absorb the pain, plenty of time for me to palm his cock in my hand, to tug on it, to make the game—if you will—harder than ever.

Then two. Harder than the first. Simon paused. He sighed. He spoke. With his ‘thank you’ caressing my ears, I bent down and gave his cock a kiss. A nice wet one. I think he understood not to come before the bell. I think he got the fact that this punishment was nothing compared to what I’d give him if he failed me.

When we reached the last minute, I turned on the TV. Together, we watched the crowd in Times Square, the revelers who cavorted drunkenly for the camera. The announcer began to count. I got ready for the final blow. Simon said “Please,” but I waited for the countdown. 10…9…8…7…6…5…4…3…2. I struck at one, and he came.